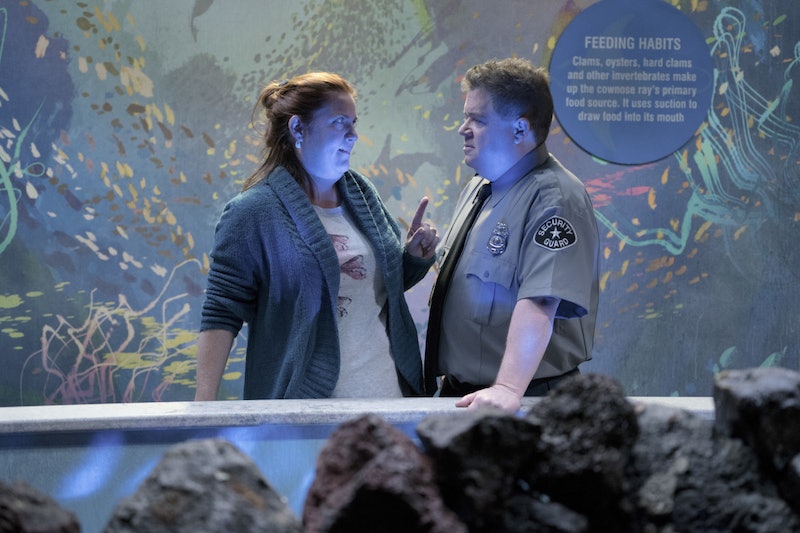 If you're a celebrity superfan of Crazy Ex-Girlfriend , it turns out that it's much easier to guest star on The CW's hit comedy musical than you think. All it takes is a quick shout-out on Twitter and showing your support for the show on social media, and executive producer Aline Brosh McKenna will figure out a way to get you on the show. The most recent and arguably biggest case of this happened tonight when none other than comedy powerhouse Patton Oswalt showed up out of the blue in the end tag of the episode. Surprise!

After Rebecca (Rachel Bloom) and Paula (Donna Lynne Champlin) got caught digging up a grave in a cemetery to find evidence to support one of their major cases at work (don't say they're not committed to their jobs!), Rebecca ran from security but Paula got caught trying to climb her way out of the dug up grave. The only way she talked the guard out of pressing charges? She had to go on a date with him to the local aquarium. But much to everyone's surprise, when Paula finally paid her debts and went on the date in the end tag of the second episode that aired, "When Do I Get to Spend Time With Josh?" which was actually written by Bloom and McKenna, the security guard turned out to be Oswalt in one of the creepiest roles he's ever played.

Bloom was too excited about his guest spot on the show to keep it a secret. McKenna, speaking to Bustle at the trendy Los Angeles brunch spot Estrella, reveals that she finally gave Bloom the go-ahead to spill the news on Twitter the night before his episode aired.

"He has been a fan of the show from the beginning," McKenna says. "We have sort of made it our practice that anytime somebody shows the show some love on Twitter, I file it away in my head. That's how Jamie Denbo got in an episode. And Patton's been tweeting about the show since episode 5. Any of the famous people who help us in that way, who shouts out to us on Twitter, I always try and keep that in the back of my mind for [a role]."

Oswalt hasn't just been voicing his support for the series on Twitter. According to McKenna, he's also been a big supporter of the show behind-the-scenes as well.

"Last year we did a showcase and he came and emceed and did our panel," McKenna says. "He's been a really solid ally and it's really great that someone so visible but also such a comedy hero of ours and so brilliant be a fan was such an honor. When this character came up, Rachel reached out to him to see if he wanted to do it and he did so we were thrilled. We knew we needed a creepy security guard and we knew he'd make a great one. He was a fan and he was down."

The Crazy Ex-Girlfriend team knew they didn't have to give Oswalt much direction when it came time to film his scene.

"He was just great," Bloom says. "He was in and out because we only had him for that tag, but it's our longest tag that we've ever done. We just let him run with it because we didn't want to cut into it. He improvised a ton and everything he said was just so funny and so creepy."

According to McKenna, he was so funny that "the crew actually had to hold their breath."

"When the director said, 'Cut!' everybody fell to the ground laughing," McKenna says. "He was just so funny. Hysterical. And Donna was so happy she got to do a scene with him."

Could there be a repeat performance in the future?

"I would love to have him back but he's so busy, obviously, because he's such a powerhouse," Bloom says. "But he really has been a longtime fan of the show so it was such an honor to have him. He's such a nice guy and just so passionate."

Even if he's never seen again on the show, airing Fridays at 8 p.m. on The CW, he certainly left quite the impression on Paula. She's probably scarred for life when it comes to aquariums ... and sea urchins.

More like this
Tamra Judge & Vicki Gunvalson Gave A Hopeful “Tres Amigas” Update
By Brad Witter
Howard Stern's Net Worth: Is He The Richest Man In Radio?
By Hugh McIntyre
The 'Love Island' Contestants *Do* Know Who Gemma's Dad Is, After All
By Bustle UK
RHOA’s Kenya Moore Said Her Friendship With Marlo Hampton Is “Too Far Gone”
By Brad Witter
Get Even More From Bustle — Sign Up For The Newsletter