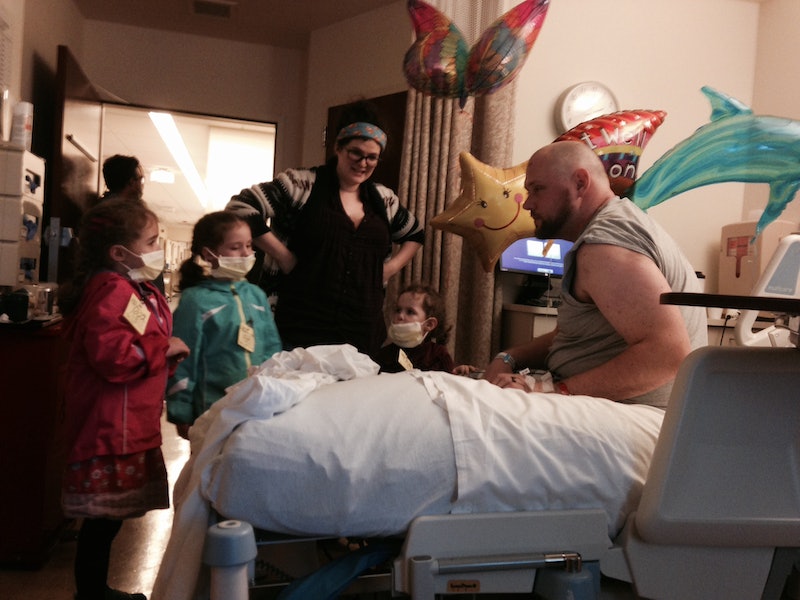 I’ll never forget the day the Affordable Healthcare Act was passed. My husband and I hugged each other so tightly I thought my ribs might crack, and I sobbed. We didn’t say much, only whispered, “Thank God, thank God,” over and over.

It was that two and a half years earlier, my husband had been diagnosed with brain cancer— stage four glioblastoma. It was supposed to kill him in 18 months, and instead, he found the tenacity to survive. But survival came at a staggering cost.

In the months of his unemployment, we held our breath as Congress voted on whether or not to extend unemployment benefits. Month after month, we borrowed money and fell deeper into debt to cover our COBRA continuation coverage. Medical bankruptcy was a very real concern, not just for us, but for tens of millions of Americans. And although it is not technically legal to discriminate against disabled people, my husband missed out on at least one job after they found out about his medical condition.

Even when, nine months later, he found a job, all the ACA provisions hadn’t kicked in yet. For more than a year, despite his employment, my husband was ineligible for his new company’s healthcare plan. And now that he was technically employed, the cost of maintaining COBRA only went up.

When each provision of the Affordable Care Act became reality, it was like another prayer was answered. Yet some of those same people who had prayed for us, month after month, were furious.

Every other month we spent $2,500 on an MRI to keep track of whether or not his tumors were growing. Each time, friends and family poured out of the woodwork. Not to help with the financial burden of brain cancer, but to assure us we were in their prayers. They said they’d added us to their church’s prayer list. That everyone cared about us and loved us and wanted him to survive. That they wanted him to live to see his daughters grow up, to dance with them at their weddings, to hold his grandchildren.

When each provision of the Affordable Care Act became reality, it was like another prayer was answered.

Yet some of those same people who had prayed for us, month after month, were furious. They hated President Obama on principle — “Obamacare” could be nothing but a disaster to them. Over and over they railed against Obama’s overreach, voted for politicians who promised to repeal the ACA, ranted against the individual buyer mandate, and against “moochers” who wanted “free healthcare.” And then, when my husband’s next set of MRIs came around, they sent notes about their hopes and prayers.

Since those early months of the ACA, my husband got a much better job, one he still has today, with great insurance — insurance that is better in part because of policies enforced by the ACA. His new insurance is banned from lifetime coverage caps, or excessive waiting periods for insurance to kick in. His new insurance must also cover my birth control, so we are able to grow our family at the pace we want. His post-ACA insurance covered the treatments he needed when his cancer came back, his brain surgery, physical therapy, chemotherapy, and the dozens of medications that came with it. And again, my husband had the tenacity to live.

In the year leading up to the 2016 election, I begged everyone I knew to vote against Donald Trump. I pointed out over and over that repealing Obamacare was as good as killing my husband, as pulling the device off his head and the $1,000 per month anti-seizure drugs from his hands.

He has lived long enough that treatment for his disease has changed in nearly every way. Now, instead of taking chemotherapy every month, he wears a device called Optune on his head — all the time. It kills cancer cells without medication, without side effects. But it’s not cheap. Without insurance, it can cost as much as $35,000 each month. With insurance, we pay nothing.

In the year leading up to the 2016 election, I begged everyone I knew to vote against Donald Trump. I pointed out over and over that repealing Obamacare was as good as killing my husband, as pulling the device off his head and the $1,000 per month anti-seizure drugs from his hands. My husband would never be free from pre-existing conditions. If he were to lose his job, we could be bankrupt in days, paying for medical expenses alone. His job depends on state contracts, and our state has failed to pass a budget for years. And even if his job remains stable, without the ACA to keep insurance companies from lifetime caps, his access to insurance could be meaningless.

Friends and family, people who watched him survive two brain surgeries, more than two cumulative years of chemotherapy treatments, radiation, medical trials, and a sci-fi machine ever-present on his head, rolled their eyes at my pleas. They said the Republicans would never gut the pre-existing condition clause. They said it was too popular. They said I was being paranoid.

That the Senate voted to strip my family of our safety, security, and peace of mind in the dead of night does not surprise me.

And last night, in the wee hours of the morning, the new GOP senate rammed through an act to gut the pre-existing condition clause from the ACA. Obamacare isn't just insurance bought in the state exchanges, it's a set of laws that impact everyone. Whether or not your insurance is purchased through Obamacare, your insurance is shaped by it. Because of the Affordable Care Act, nobody can be discriminated against because of preexisting conditions. Nobody can have lifetime caps forced on them. Without the ACA, anyone who has ever had cancer, like my husband, can be barred from purchasing new insurance. This is the first step to putting us right back where we were eight years ago, when I gnawed my fingernails each month, hoping Congress would allow us to continue our COBRA continuation coverage.

Only things are not exactly as they were eight years ago. Now, my husband is a father not to infants, but to three children who need glasses and braces and fall out of trees. Now, we have a house in the suburbs with a swing set in the yard, PTO meetings and neighborhood watches. Now, instead of worrying that a lack of healthcare coverage will leave me widowed with two infants, I worry that it will leave me widowed with three children old enough to grieve, old enough to be devastated if I have to sell our home and all the things they know and love, to lose so much of their own lives at the same time as losing their father. Now I worry that when I call our pediatrician, concerned about my daughter’s headaches, perhaps I will learn not only that she has her father’s cancer, but that she may never be able to be insured again.

That the Senate voted to strip my family of our safety, security, and peace of mind in the dead of night does not surprise me. I am beyond being surprised by the callousness of the Republican leaders of Congress.

What surprises me is that those friends and family, religious Republicans who hated Obamacare because of what it stood for — but who were more than happy to offer their prayers — are surprised this day has come. Now that the news has come out about the late-night session where the Senate voted to eliminate these protections, these friends and family are in shock. They didn't believe it would happen, they didn't believe that when Trump promised to repeal Obamacare, he meant the parts of it they liked. And the more about the ACA they learn, now that it's quite possibly in its dying days, the more they are discovering they actually like it.

I’m surprised people can be amazed that the thing they voted for and wished for and begged for has come to pass, and is hurting us.

More like this
The 5 Best Rugs That Cats Can’t Destroy — & Why Your Cat Scratches, According To A Vet
By Danielle Calma
Sara Zwangobani Is A Self-Proclaimed 'LOTR' Super Fan
By Frances Stewart
Kidnapping Victim Jan Broberg Is Prepared For A Friend Of The Family Criticism
By Brad Witter
Andrew Gray Returned To 'Bling Empire' In Season 3 To Make Amends
By Brad Witter
Get Even More From Bustle — Sign Up For The Newsletter