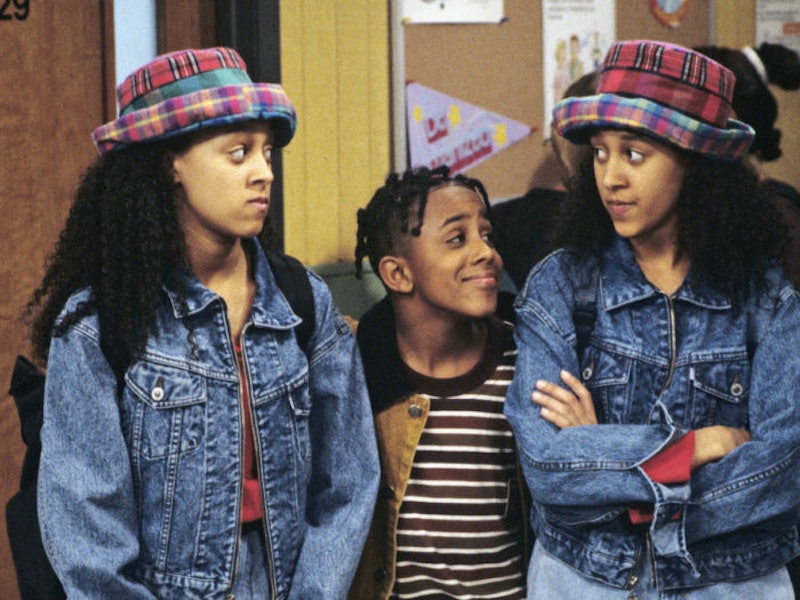 There were no apps or social media when you were growing up, so you had to be more creative in the way you made friends in the '90s. You'd have to — shockingly — actually engage in conversation with new people, rather than just hitting the "like" button a few times and letting the good times roll. Making friends meant reaching out, and actually putting in solid, physical time together, rather than conducting your relationship totally digitally. That's not to say you didn't fire up the dial up internet after school and get to chatting on MSN — it's just that you also spent more time actually talking with your voice, and looking at each other's actual faces with your actual eyeballs, rather than browsing each other's Facebook on a screen, totally detached from each other.

Friendship in the '90s was weird and wonderful. Everything functioned differently, simply because of the lack of technology. For instance, if you made plans to meet, you did it on a landline, and couldn't cancel via text at the last minute. You were always destined for the mall. And instead of snapchatting, you wrote actual physical notes to one another. There was no such thing as #SquadGoals (although whatever Drew Barrymore and Winona Ryder were into, you wanted in), and everything seemed much simpler (except for secret three way phone conversations, which we're glad are a thing of the past now, because it was one of the ways '90s friendship was creepy). Here are 11 ways you made friends in the '90s.

1. Getting A Random Pen Pal

In the '90s your school would often set you up with a pen pal from another school. You'd write each other letters and form very real friendships, even though you'd often fill the envelopes you posted with glitter and doused them in Tommy Girl perfume.

2. Chatting On MSN Messenger Or ICQ

As mentioned above, you still made friends online back in the '90s. Only it was a much more laborious process of logging onto the internet, hoping they were on at the same time, and engaging them in a chat via MSN or whatever other arcane chatting application you used on your desk top computer in the '90s.

3. Spending Hours Chatting On The Phone

Back in the '90s friendships could hinge on a phone call. Calling a new friend for the first time could make or break the friendship, depending on how your phone chemistry was.

4. Hanging Out At The Mall

The mall was second only to the phone. To make friends in the '90s, you had to have good phone chemistry and good mall chemistry. Often you'd make a new friend at the mall (friend-of-a-friend type thing), so you knew from the beginning the friendship had a solid foundation.

5. Being In A Spice Girls/Destiny's Child Tribute Group Together

When a mutual friend bought their other friends together to form a tribute band, friendship magic would happen on a level that's still unrivaled.

6. At The Local Gaming Arcade

Making friends was easy over arcade games. As was making foes. It could go either way when you were hanging at the arcade.

7. At Another Friend's Slumber Party

Staying up until 3 a.m. on a sugar high and watching Leprechaun on VHS was a bonding experience unlike any other in the '90s.

8. Overhearing Them Saying They're Such A Rachel, Which Would Be Perfect For Your Monica

Of course, in the '90s, you needed six Friends to align with the Friends on Friends. This was the basis for every healthy, dynamic, cliched '90s friendship.

Becoming friends with someone in the '90s could be as simple as passing a quippy note during class. Getting notes passed back to you edified your new friendship. Eventually, your notes would be as frequent as the texts you send your friends today, which is how you knew you'd be friends forever.

10. At The Area In The Record Store Where You Could Listen To New CDs Through Headphones

Friendships could easily be made at the CD station in HVM while you were listening to the new Nirvana or No Doubt album through headphones. Spotting someone the same age as you, with the same music tastes, was the ultimate friendship meet cute of the '90s. You basically were Empire Records.

Remember the sweet satisfaction of getting an email from someone who was supposed to send an email to six of their friends in order to get good luck for you all? It was kind of sweet, as stupid as it was, and friends were often ingratiated to one another via chain emails, the way we might be by sharing a viral video we think a new friend might like now.