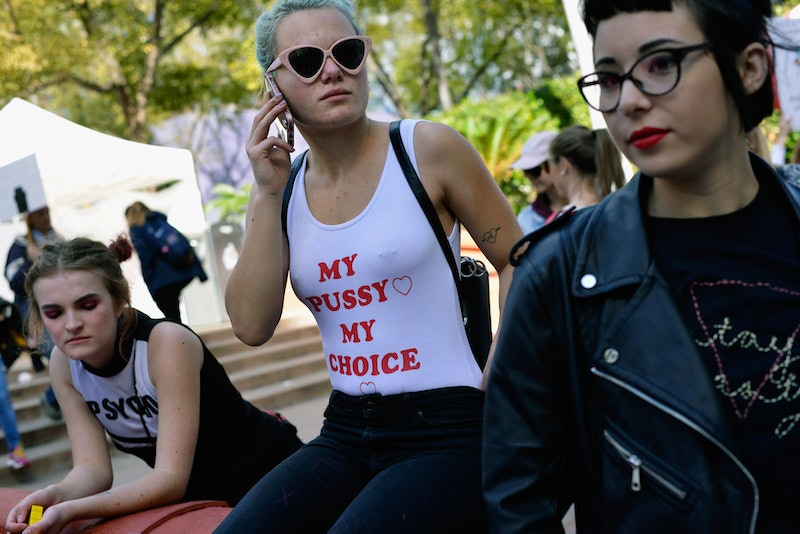 In the weeks leading up to the Women’s March on Washington, Brooklyn-based activist ShiShi Rose penned a moving letter to “white allies” planning to attend. Rose wrote that while many have viewed the nation through a different lens since President-elect Donald Trump's election, “For the rest of us, this is how it has always looked." Rose continued, "I want to remind you that no ally ever got very far, in any movement, without acknowledgement of their own privilege daily. ... You don’t just get to join because now you’re scared, too. I was born scared."

Some white women looking forward to the march seemed to take offense to Rose’s words. In fact, her letter prompted 50-year-old Jennifer Willis to opt out of attending the event altogether. The South Carolina minister told the New York Times that she felt unwelcome, adding, "We’re supposed to be allies in equal pay, marriage, adoption. Why is it now about, ‘White women don’t understand black women?’"

Rose’s words may have cost the Women's March one participant, but she was right, and white allies need to note her point to march with awareness. When I first learned of the march, as a black woman, I was skeptical. In its early days, I'd heard the march had no minority women in leadership positions and I thought, Oh great, it’s just another event by white feminists, for white feminists.

The event also quickly drew criticism thanks to its initial name, "Million Women March." The original Million Woman March was a black-woman led event in 1997 to combat racist and sexist oppression — but in its early stages, the new Million Women March did not explicitly promote an anti-racist agenda. Its use of the name was a clear co-opting of the original march. Black women noticed, and black women spoke out. At just a few weeks old, the march was already becoming divided along racial lines.

Of course, I believed the general cause to be a noble one, but the nature of the event led me to believe black women were, by default, not a priority to the organizers. Although they did not verbally declare as much, the lack of minority leaders in the march was proof enough.

Black women have long experienced what white women are now complaining about: feeling alienated. White feminism and black feminism have long been at odds with each other, largely as a result of the racist sentiments long promoted by the former that alienated the latter. Marches in particular have been a sore spot for the groups. For just one of many examples, black activist Ida B. Wells took to the 1913 suffrage parade in Washington and was told by white feminist leaders to march in the back with the other black women.

When white women claim they are being alienated by women of color who demand to have their voices prioritized in the march, that is simply code for, “Please, let me march and feel good about myself without actually addressing my own privilege.” In order for intersectionality to find its way in to the march, white women, though oppressed in many ways, must acknowledge their status as oppressors. Or, as feminist icon Gloria Steinem told the New York Times, “Sexism is always made worse by racism — and vice versa.”

But, unlike their foremothers, the white feminists leading the now-massive march did not ignore the cries of black women and other women of color asking for inclusion and intersectionality. Now, three women of color join New York fashion designer Bob Bland at the helm of the march: Tamika Mallory, a black gun control activist; Hispanic juvenile justice activist Carmen Perez; and Linda Sarsour, a Muslim who leads New York’s Arab American Association.

Along with diverse leadership, the march now boasts a four-page, uber-intersectional set of principles. The document highlights the march’s commitment to human rights, including everything from LGBTQIA and reproductive rights to civil and worker's rights. Additionally, organizations partnering with the grassroots movement are diverse, including EMILY’s List, GLAAD, Planned Parenthood, Muslim Women’s Alliance, and more.

If the goal of the march is to see lasting change rather than a one-time event aiming to make people simply feel good, we have to think about race, class, sex, and ability privilege. Along with having leaders of color, the march must make its anti-racist, anti-classist agenda explicitly known. These issues — and the organizers' commitment to addressing them — must be noted first and foremost.

Issues of race, sex, class, and ability are tough and difficult to talk about, but the dialogue is vital to progressive social, economic, and political change. And the march organizers, though imperfect, have taken steps toward the inclusivity and intersectionality we need to see in the women’s movement — and any social movement. It is important to stand together, but true solidarity is not ignoring one group's plight to focus on that of another.

So, on the day after Trump’s inauguration, I will be marching with the tens of thousands (and maybe millions!) of women and men who want to take a stand on social justice. I will stand in solidarity with those fighting for human rights. I will make my voice heard, and listen to the voices of those around me.

More like this
Black Women's Equal Pay Day Highlights An Upsetting Problem
By Brandi Neal
Women Around The World Are Cutting Their Hair In Solidarity With Mahsa Amini
By Darshita Goyal
10 New Must-Read Books Out This Week
By K.W. Colyard
Zendaya’s Sheer Valentino Look Won Paris Fashion Week
By Dominique Norman
Get Even More From Bustle — Sign Up For The Newsletter