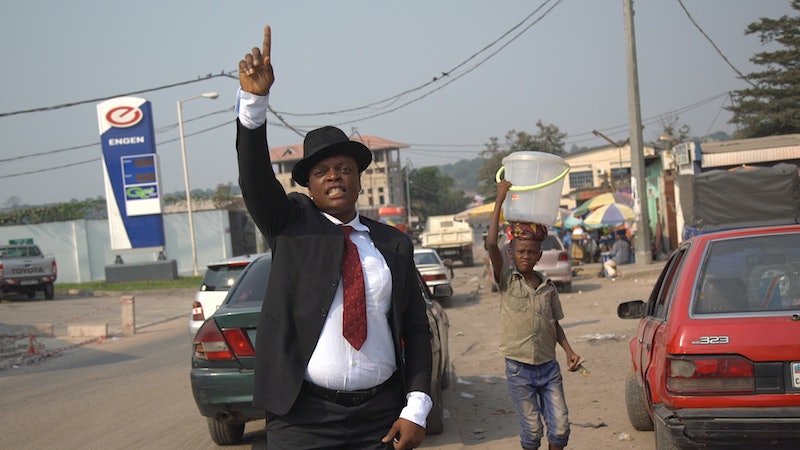 For women anywhere in the world, smashing the patriarchy is a brave and difficult task, but especially in Kinshasa, the capital of the Democratic Republic of Congo (DRC). Yet, every day, Maguy Washilama wakes up, puts on a man's suit and shoes to match, hops in the rickety taxi she owns with her partner, and does just that. Being a woman taxi driver in the DRC is rare. Suiting up in fancy men's clothing on top of it is pretty unheard of. "It really makes me angry to hear that women shouldn’t be doing men’s work," Maguy tells Bustle. "When I wear my jacket and get into the car, I forget I am a woman and go to work."

The DRC is listed as 147th of 155 countries in the UN Gender Inequality Rank, which measures discrimination on women and girls on criteria such as health, education, political representation, and labor market. A country the size of Europe, the DRC has been labeled "rape capital of the world" and depicted as such — and not much else — ever since. But it is also home of the world's strongest and boldest women, in a country where 80 percent of households depend on them for survival. Maguy the taxi driver is one of them, and Bustle followed a day in her life in a short documentary.

Maguy and her partner, Jean Kasongo, used to rent their car to others cab drivers, and then share the profit. They turned out not to be trustworthy, so the couple decided to take matters in their own hands. Jean, a mechanic, patiently taught Maguy how to drive in the city's notoriously chaotic and unruly traffic — there are 10 million people living in Kinshasa — until they deemed she was ready. "She went out in the morning and came back at night with more money that I ever earned in a day," remembers Jean.

"I want to be a reference for people. I want people to see that’s it’s possible to have gender equality in the workplace. I already started that equality at home."

When Maguy is out driving, Jean stays home, cleans and irons her clothes, an art she doesn’t master. "I am not jealous of her or embarrassed to iron her clothes, because I understand the need to look professional when you go to work every morning," Jean tells Bustle.

Maguy’s flamboyant style takes root in the “SAPE” movement, which means “attire” in French slang, and is the acronym for "Society of Ambiance-Makers and Elegant People." This subculture was born in Brazzaville, the capital of the Republic of Congo (a former French colony, unlike the Democratic Republic of Congo, which was a Belgian colony) only separated from Kinshasa by the muddy Congo river. "Sapeurs" originally imitated the style of 1920s French dandy, making SAPE a sort of “reverse colonization practice” that quickly spread to Kinshasa.

In the past few years, women "sapeurs" have joined the ranks in both countries, but remain a minority. Sapeurs spend all their savings in flashy designer suits foulard and canes, polychromatic silhouettes in Kinshasa’s dusty streets. Often revered, they are sometimes decried as indecent in countries ravaged by war and poverty.

"Even though your pockets are empty, you can still stand proud because you’re wearing a good outfit," explains Maguy. In her three-room house, where the couple lives with their three children, one room is dedicated to her shoes, pants and jackets. She was never into braids or dresses. Her masculine demeanor attracts incredulous stares, smiles and critics, but most importantly, customers. "I can’t be too feminine in my job or else, I won’t be taken seriously," she says. "I don’t really have a choice. My kids are counting on me."

There are bad days, when Maguy makes little to no money. "I can be dressed as smart as I want, but as I drive a wreck, customers often don’t want to get in," she admits. The windshield of her car is smashed in several places, and the rear-view mirrors bore a dangerous resemblance to glass mosaic tiles. "If the customer is in a bit of hurry, I might lose a chance to work, because the car won’t even start. It’s difficult, but I don’t complain, because it’s my own car. You should always be happy to have what you have."

Maguy’s driving technique skillfully combines seduction and aggression. She gets out of the car every ten minutes or so, to allure clients or to insult someone standing in her way. "I won’t take abuse in the streets, just because I am a woman," Maguy tells Bustle. "I want to be a reference for people. I want people to see that’s it’s possible to have gender equality in the workplace. I already started that equality at home."