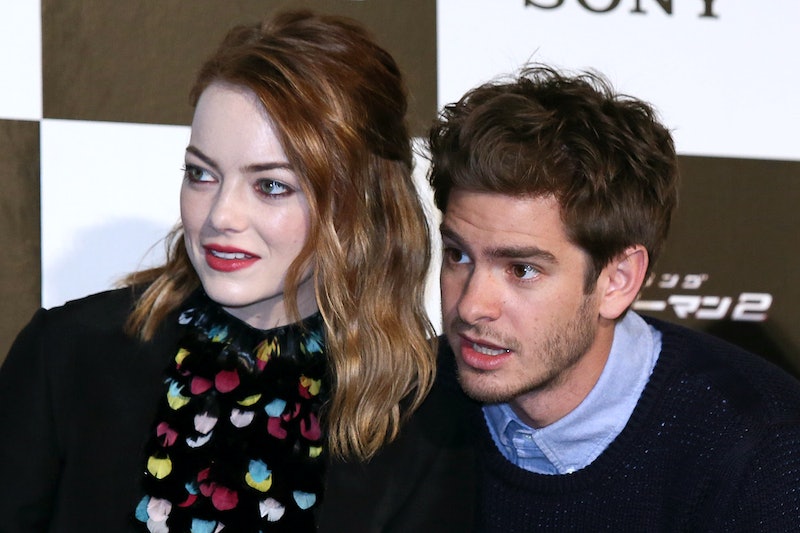 While we've been waiting for news on whether or not the Spice Girls are going to make everyone's year with a reunion tour, the girl power band has been cropping up in the headlines for another reason. It has nothing to do with them and everything to do with their considerable fan base which includes Emma Stone. Supposedly. She may have burst into tears when Mel B skyped her on the phone, but she fumbled the one song by the Spice Girls that everybody knows even though it's been in practically every teen film done or set in the '90s. Her status as proclaimed Spice Girls fan was in serious jeopardy before her appearance on Jimmy Kimmel Live. That's when we learned that Stone is such a huge fan of the girls that she can forge their autographs. Wait. What?

Using a marker and a sketchpad, Stone copied the band members' signatures one by one as Kimmel held up their photographs for her to see — as if a woman who went as far as to practice their autographs over and over would need help remembering which girl one is which. She even informed Kimmel that each girl signs their real name rather than their Spice moniker and remember to add their little flourishes, like the period Victoria Beckham writes after her "x" or that Emma Bunton writes Big Kisses before her name.

Stone jokingly compared herself to Frank Abagnale Jr., the real life con artist whose story inspired the Leonardo DiCaprio film Catch Me If You Can, and could anything be more accurate? Now that she's adding forgery to her list of skills, Stone has all the makings of a good con artist.

She's an actress, which means she's an excellent liar. Many of Abagnale's capers were pulled off simply by lying about his identity and acting like he knew what he was doing. That's how he posed as a pilot, a doctor, and a teaching assistant. Over the course of her career, Stone has been a writer, a law school graduate, a rock star, and a chief intern at Oscrop and she's made more money doing so than Abagnale ever did. She even fooled us into thinking she was a redhead. What else is she hiding?

She's a Master of Disguise

Like any actress, Stone is good at adopting an entirely different persona based on what she's wearing. Many times Abagnale simply dressed the part in order to convince people that he was who he said he was despite his young age. In 2010, Stone played high school student Olive Penderghast in Easy A and in 2011 she was law school graduate Hannah Weaver in Crazy, Stupid, Love. With a simple change of clothes, she can convince us that she's basically any age.

She Survived the Zombie Apocalypse

All right, so Frank Abagnale Jr. never had to deal with rogue zombies in a post-apocalyptic Earth. But that's where Stone would surpass him on the con artist ranking, because she has not only shot zombies in the face but she's also shot mobsters in her stint as a kingpin's girl in Gangster Squad. Witchita was pulling cons every second to help herself and her sister even the most seasoned police officer would think twice before bringing her in.