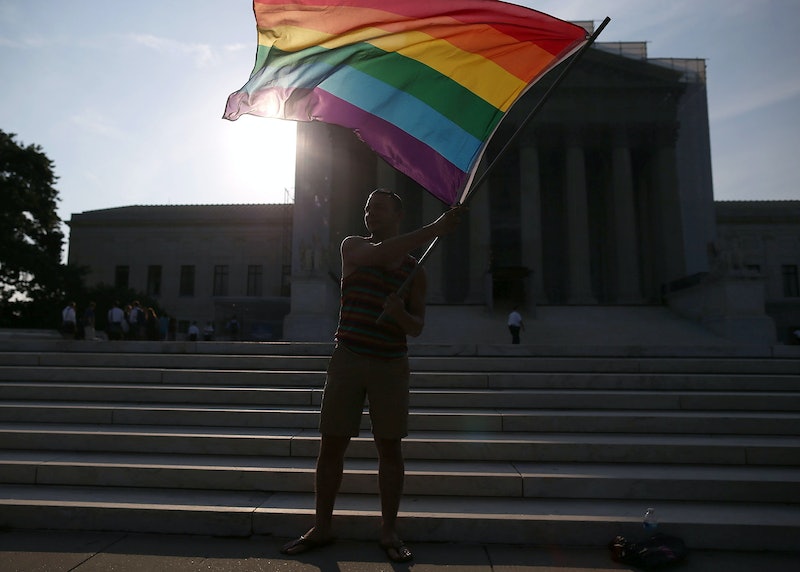 For many of us, keeping up with the Trump administration has been distressing, to say the least. With the constant flurry of shocking announcements, proposals and alternative facts, it’s easy to forget that some Republicans are eager to get the new Trump crew to finally pass a bill they’ve been pushing since it was first introduced to the House in 2015. The First Amendment Defense Act, a measure Trump promised to sign while on the campaign trail, claims to protect the religious freedoms of Americans. Senator Ted Cruz, co-sponsor of the bill, told BuzzFeed news, “The prospects for protecting religious freedoms are brighter now [with Trump] than they have been in a long time.”

The First Amendment Defense Act “protects” companies or people from being punished by the government for discriminating against anyone with different religious beliefs. The bill's goal is to prohibit "the federal government from taking discriminatory action against a person on the basis that such person believes or acts in accordance with a religious belief or moral conviction that: (1) marriage is or should be recognized as the union of one man and one woman, or (2) sexual relations are properly reserved to such a marriage."

In practice, these "religious freedoms" legalize outright discrimination against the LGBTQ community, potentially allowing businesses to turn away LGBTQ customers, landlords to refuse LGBTQ tenants, and charitable organizations to refuse service to the LGBTQ elderly or disabled.

I don’t think he ever got over his shame— the idea that something was wrong with him. He’d grappled with this sense of “wrong” all alone for 30 years, and even though he eventually had the courage to speak out about it, I think it was too late.

All this is to say: Those currently in high political power in the United States don’t support the LGBTQ community. When a large powerful group (the actual government) is labeling something “wrong” and giving groups permission to be bullies, that can lead to a lot of hiding. And hiding who you are goes hand in hand with shame.

My father was born in 1948 to foreign parents consumed with appearances. As he grew up, the entire family chose to be the versions of the selves they felt they should be. They tried to only speak English in public and took their new American roles very seriously. Fitting in wasn’t a choice for them. They needed to not be immigrants, especially after escaping Spain, a country in which they no longer felt accepted.

So, my dad learned early on that he couldn’t be himself— that he had to dress for others and put on a show. I think about him grappling with the decision to finally come out in 1983, thirty years after he knew he was gay. I imagine it was an excruciating decision at that moment in history. I picture him staring at my crib and feeling both an intense need to stay and a great need to leave. I’m proud of him for leaving and choosing to be himself. But some friends didn’t agree. I never saw my godfather again. And a family member recently said to me, “Your dad wasn’t really gay, was he? Wasn’t that just a phase?”

My dad’s gay heyday was in '90s Chicago. He’d gotten used to the scene by then. Madonna was normalizing androgyny and featured leather and gay men in her videos. The Chicago gay clubs were thumping 'til daybreak. He’d pick me up in the suburbs and we’d blast C& C Music Factory's "Gonna Make You Sweat" as we sped down Lake Shore Drive. We were lucky to live in a blue state — we were right next to Pence's Indiana, but philosophically, we were a million miles away. Chicago boasted a booming leather scene where my dad had joined the Chicago Gay Men's Chorus and competed in Mr. Chicago Leather. To that family member who questioned him: YES! He was fucking gay.

But there was always an undertone of sadness. This was not yet Obama’s time. My dad was forced to say goodbye to several friends who had wasted away from AIDS, what had initially been called “gay-related immune deficiency” and was often blamed on gay people by the media and fearful people. This was the decade in which Matthew Shepard and so many others were brutally murdered for their sexuality. And, like today, politicians were speaking out against gay rights. In Newsweek in 1994, Senator Jesse Helms opposed the "homosexual lifestyle" and called gays "degenerates" and "weak, morally sick wretches.” Senate Majority Leader Trent Lott of Mississippi compared being gay to a condition "just like alcohol...or sex addiction...or kleptomania'' — so, a disease in need of treatment.

Yes, there were many things that led to my father’s eventual suicide. He began to drink a lot. His business wasn’t doing very well. But I don’t think he ever got over his shame— the idea that something was wrong with him. He’d grappled with this sense of “wrong” all alone for 30 years, and even though he eventually had the courage to speak out about it, I think it was too late. I believe his doubt had eaten away at his self-worth, and society and the government weren’t helping. He took his own life in 1996, just two months after the Defense of Marriage Act was first introduced. Signed by Bill Clinton, it became a law ensuring marriage would be only legal between heterosexual couples. I have no idea if seeing this bill introduced to Congress had anything to do with my dad’s decision. But I know it definitely didn’t help take away his shame or his pain.

According to the Trevor Project, an organization helping to end suicide among LGBTQ youth, teens within the LGBTQ community are FOUR times more at risk of suicide than heterosexual teens. Plus, 40 percent of transgender adults report having made a suicide attempt. And get this: LGB youth who come from highly rejecting families are 8.4 times more likely to have attempted suicide than their LGB peers who reported no or low levels of family rejection. This proves that acceptance from others, though we try to not give it weight, is really important.

If that didn't hit you, Sheri A. Lunn, Vice President of Marketing & Strategic Engagement at the Trevor Project, told me that on November 9th, the day after the election, the Trevor Project received its highest number of crisis contacts in a single day in the nearly 20-year history of the organization. That's a lot of scared LGBTQ youth reaching out. And what about those too scared to call?

Every year since his death in 1996, I talk to my dad about the world and its progress. I rejoice with him about all the things he would be enjoying. “You should have waited, Dad! They are making such great HIV drugs now.” “Dad! There’s an NFL player who came out!” “Dad, you should see this! Gay people are allowed to get married throughout the country.” “Dad, I just met a 13-year-old gay kid who is so comfortable with his sexuality that it made me jealous.” “Dad, there are so many TV shows about trans people right now. You would diiiiiiie!” “Dad, I wore leather pants today. You would have been proud.”

I have felt a calm relief each year as I see more and more gay people hold hands on the streets, as LGBTQ soldiers are no longer forced to hide, as more openly gay congresspeople begin to represent the underserved. It’s unfortunate that acceptance by society makes such a deep impact on a person’s level of shame. But validation by society or government does mean a lot — higher self-esteem, less self-doubt, less hiding ourselves, less suicides. In fact, a new study shows that teen suicide attempts in the U.S. declined after same-sex marriage became legal, proving that a law alone can give kids a brighter hope for the future. The laws that give gay people rights aren’t just about rights. They help young people feel accepted. They help families talk more openly. They help families stay together. They help daughters keep their fathers.

To take that away is devastating.

Why would we want to let an excuse like “religious freedom” hurt a group that’s already three times more likely to experience a mental health condition than others? How can we let people in political power continue to speak out against the rights of American citizens?

If FADA is introduced to Congress, if Pence or a Republican senator simply suggests that minors undergo conversion therapy (an actual suggestion in the 2016 Republican Platform), or if another anti-LGBTQ measure is introduced, I ask you to please fight for the rights we’ve worked so hard to get. Call and write your senators to let them know that LGBTQ people don't need to be changed. Fight for the kids who want to keep their parents. And the parents who want to keep their kids. And the people who just want a wedding cake or a place to take their ailing parents without discrimination.

About 121 people, gay and otherwise, will die from suicide today. And it’s 100 percent preventable. You can help by simply being more accepting, and by being kind to people or groups you don't understand. By fighting against a government that wants to make discrimination legal, and realizing we're all just humans trying to make our ways in the world.

If you're in crisis, please call and talk to someone who can help: