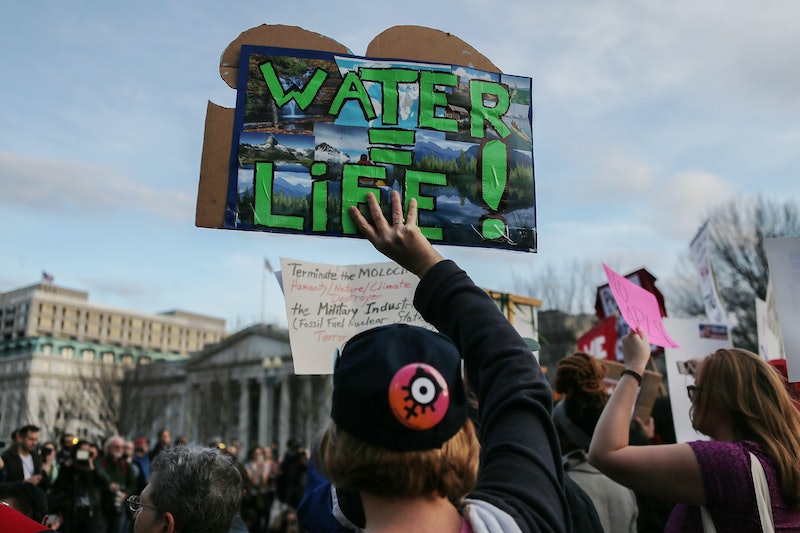 The Sabal Trail sounds fairly innocuous, the name conjuring up images of picturesque hikes or nature preserves. However, the Sabal Trail is a 515-mile pipeline that is set to carry fracked natural gas across Alabama, Georgia, and Florida and potential threatening 1,958 wetland systems, according to its critics. A joint venture between Duke Energy and NextEra Energy, the parent company of Florida Power & Light, construction on it began in May 2016 by Houston-based Spectra Energy.

The 36-inch pipeline crosses the critical recharge area of the Floridan Aquifer, the second most productive aquifer in the world, which provides drinking water to 10 million citizens in the region. Besides posing a significant threat to freshwater drinking sources, environmental activists say the pipeline threatens the habitat of several species including the endangered gopher tortoise.

Five compressor stations are planned to be built along the path, including one in Albany, Goergia, an environmental justice community. In an October 2015 letter written to the Federal Energy Regulatory Commission (FERC) a group of Georgian congressmen, including Rep, John Lewis, criticized the plan for the Sabal Trail pipeline, stating:

common sense would suggest that a pipeline carrying a highly flammable substance and a massive polluting industrial facility should not be placed in any residential community, much less an environmental justice community

That same month, the Environmental Protection Agency issued a scathing 30-page letter to FERC citing “very significant concerns” about the proposed route and its impact on wetlands. Soon after, another division of the EPA approved the project after meeting with Sabal Trail Management officials.

And the concerns about the Sabal Pipeline are not exclusive to the impact it could have on the environment.160 homes have been seized by eminent domain across the pipeline’s path, and those that haven’t are reportedly seeing their property values plummet.

According to the founder of WWALS Watershed Coalition, John Quarterman, several sinkholes have already popped up along the pipeline’s path as geologists and environmentalists predicted, including two sinkholes on public roads directly above where drilling occurred. A 20-foot sinkhole opened up in Osceola County 2,000 feet from the pipeline path, condemning a Disney-owned condominium. "What if that happens where the pipeline has been laid?" Quarterman says during a phone interview with Bustle. "What kind of damage will that cause?"

While the construction has continued, several environmental agencies are fighting back.

The Sierra Club’s attorney, Dave M. Paule, tells Bustle that the environmental group is currently “challenging FERC’s certificate in the D.C. Circuit.” However, their oral argument isn’t scheduled until April of this year, and Sabal Trail LLC plan on having the pipeline in service by summer 2017. Clearly, that timing is not good for environmental advocates.

“I don’t have too many fights left in me, but this is one I’ve chosen to follow through on."

People are doing what they can to halt—or at least postpone—construction of the pipeline: contractors familiar with best management practices, concerned homeowners, environmentalists, veterans, and water protectors coming down from Standing Rock to continue the fight for clean water. Some activists like, Tim Canova, are calling for divestment from corporate banks. Prayer camps are sprouting up along the pipeline’s path, and some people are taking direct action; fourteen arrests were made on Martin Luther King Day.

Ronald Reedy, a retired firefighter, tells Bustle he is doing his best to slow down construction by training people online and in person to spot and report safety violations. “I don’t have too many fights left in me,” he says, “but this is one I’ve chosen to follow through on. We only have so much water.”