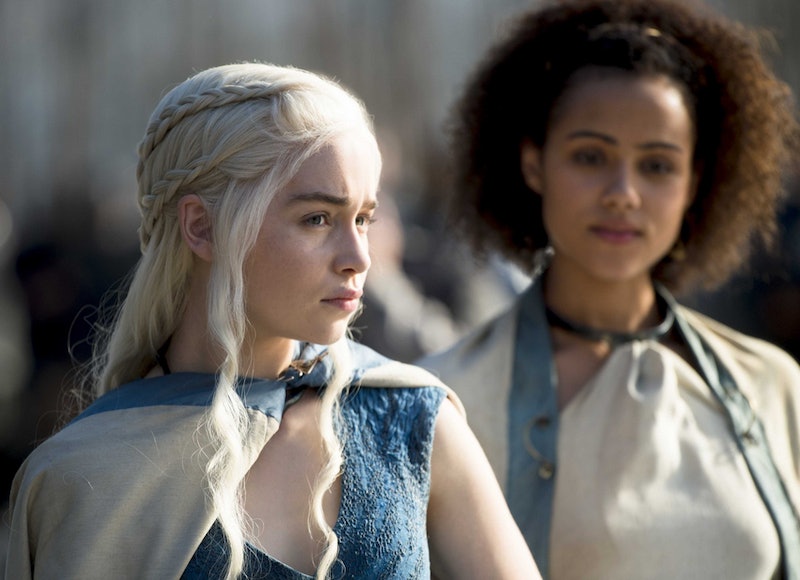 It’s been a long time since the Season 3 finale aired and since Game of Thrones Season 4 is about to begin, it’s only fitting that we refresh our memories so that when Arya and the Hound take the screen, we’re not left wondering “Why is the short girl with a terrible haircut so angry?” And when Cersei pours herself her upteenth glass of red wine, we’re sure she’s got a reason for it. (To be fair, I’m pretty sure Cersei’s rather adept at making up excuses to guzzle her beloved merlot.)

So, before we hop into the season where “All Men Must Die,” let us run through a little Season 3 finale recap.

After a bit of a misdirect, the Yunkai slaves come over to Dany’s side and Season 3’s finale ended with them lifting her up like the champion at the end of a sports movie. If you’ll recall, they even gave her a new name to replace “Khaleesi,” instead opting for “Mhysa” or “mother.”

These two haven’t consummated their marriage, because Tyrion is the only Lannister who merits the description of “a great guy” and Sansa wasn’t ready for that sort of thing. Since then, Tyrion and Sansa have become something like actual friends, though Shae is more jealous than ever. It’s strange, but seeing Tyrion pal around with Sansa (and attempt to comfort her when she finds out about more dead family members) is actually rather adorable.

But Tyrion wins our hearts heartily when Joffrey cackles over Robb and Catelyn’s deaths. He calls for Robb’s head and says he’ll serve it to Sansa at his wedding dinner, but Tyrion replies that Sansa is no longer Joffrey’s to torture and follows it up with a not-so-thinly veiled threat on Joffrey’s life.

Of course, Tywin is not thrilled with Tyrion’s insolence — you know, the whole telling Joffrey exactly what he needs to be told and not wanting to force his child bride into premature sex thing — and takes this moment to tell Tyrion that when he was born, Tywin was so disappointed with his stature that he contemplated killing Tyrion. “But instead I let you live.” If ever there was at time for a grown man to run away from home, this sounds like it.

He and his new buddy Brienne have returned from their harrowing ordeal — Jamie with one less hand and a claim to fame (his swordsmanship) ruined. He makes sure to visit his sister-lover (again, shudder) and look longing at her. Of course, all Cersei can see is his total lack of hand. Superficial, that one.

Cersei, as always, is enjoying her wine, but this time she’s showing her soft underbelly. When she does her Lannister duty and and tries to convince Tyrion to force procreative activities upon Sansa, she adds the the softer benefit of having children: they haven’t made her happy, but she’s grateful because “they are the reason I am alive.” Sure, she means they saved her skin — not that they’re her reason for breathing — but it’s close enough.

He, of course, died along with his wife, mother, and unborn child at the Red Wedding. But in the final episode, we (and Arya) were forced to witness Robb’s body being paraded around with his Direwolf’s head sewn onto his body. I would have loved to have left this detail out, but without this gruesome scene, young Arya’s journey would unfold rather differently.

After witnessing the gruesome behavior of the men who killed her family, Arya is full of fire. Later, on the road, she encounters a man who claims he did Robb's cranium stitch-work himself. She waits for the opportune moment before plunging her knife into the boasting idiot, forcing the Hound to jump in. They kill the entire group and when she’s done, Arya spews “valar morgholis” which translates to Season 4’s catch phrase: All Men Must Die. Arya is a little girl no more.

Bran and his band of helpers run into Sam and Gilly, who help them pass the wall and hand over their dragonglass weapons. Sam isn’t sure that Bran can handle what lies on the other side, but he sends them along after asserting that a brother of Jon Snow’s (Bran) is a brother of his. Aww.

Ygritte catches up to Jon and he makes a declaration of love, but before we can swoon — this isn’t your typical romance, people — Ygritte tells him he knows nothing and shoots him three times with an arrow. Somehow, Jon doesn’t die — but if we know Ygritte, the wildly skilled hunter, it’s because she does love him and she decided to let him go. Jon makes it back to the wall, where he finds Sam.

The kid was in hot water last we saw. Melissandre has determined that he must die in order for his blood to do the trick — she’s even got Stannis on board. But when Gendry bonds with Davos, the old(ish) man decides to help the young boy make his escape in a tiny (totally unsafe) boat and Melissandre decides he must die for this treasonous act. Before it’s decided, Davos presents the note from Sam’s raven, Melissandre burns it, and she seems to think is checks out. So no one dies! (That’s a sentence you don’t hear often with regard to Game of Thrones, eh?)

After running into Bran, Sam returns to the Night’s Watch to tell them about the monsters beyond the wall. And, because Game of Thrones does occasionally warm hearts, Gilly names her child after him. Feel the warmth, folks. Winter is still coming.

Theon is missing his littler Theon (that's a severed penis, in case you missed it) which has been shipped off to his father as a threat: Theon dies if the Ironborn refuse to leave the north. Papa Greyjoy tosses this threat (and Theon's little buddy) aside with all the gumption of a sleeping cat in the sun, but Yara takes it upon herself to gather some ships and head off to save her brother, who’s now taken on the damsel in distress role to Yara’s knight in shining armor (with boats!).