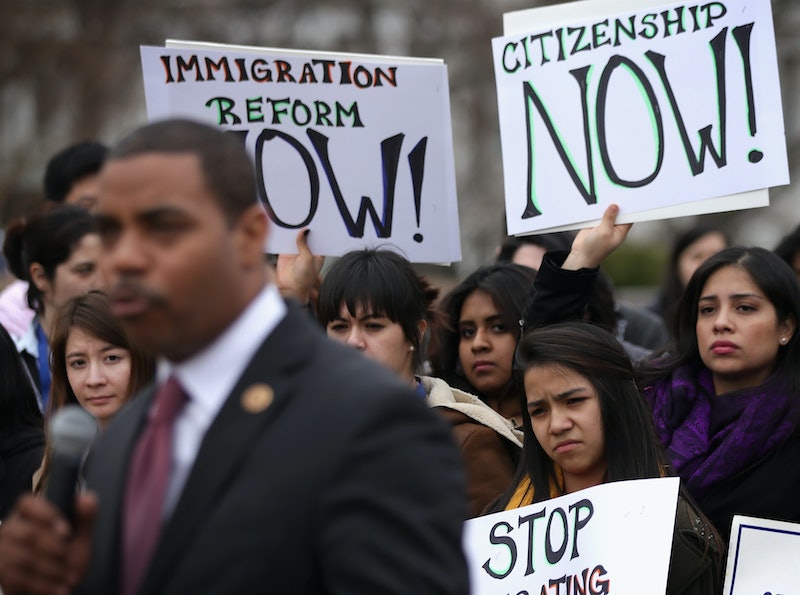 So you’re at a party, and someone says something ignorant. And while you know that they’re in the wrong, and that you could totally engage them and win if you were a bit more prepared, your words escape you. To make sure that doesn’t happen, we’ve compiled a series of handy reference guides with the most common arguments — and your counter-arguments — for all of the hot-button issues of the day. This week’s topic: How to argue for immigration reform.

Your Response: No, it doesn’t. A 2012 economic analysis found that between 1990 and 2006, immigration to the U.S. actually drove up wages for native-born Americans without high school diplomas. The increase was between .6 percent and 1.7 percent. While that’s not enormous, that's an increase, not a decrease. On the whole, immigrants who came to the U.S. during that period drove up the average wages of native-born Americans by .6 percent.

There are a number of reasons for this, but one in particular bears mentioning, because it’s integral to the entire immigration debate and will come up over and over again: Immigrants are consumers as well as employees. Those who are lucky enough to come to this country and find jobs don’t just cash their paychecks and hide it under the mattresses. They cycle that money back into the economy by buying goods and services; when more people are doing that, businesses are more profitable and can afford to pay workers more.

Your Response: That isn’t born out by evidence, either. Immigration to the U.S. actually increases the job prospects of native-born Americans in a couple of ways. For one, as mentioned earlier, immigrants make businesses more profitable simply by spending money in the U.S., which increases job prospects for everybody. Furthermore, immigrants to the U.S. are very entrepreneurial — more so than home-grown Americans. According to 2007 Census data, immigrants start businesses, own business, and hire employees at higher rates than their native-born American counterparts.

There’s more. One study showed that immigration has a positive effect on high-school graduation rates (and, by extension, employment opportunities) of native-born Americans. The theory here is that if you’re afraid of immigrants competing with you for low-skilled jobs, you’re more likely to work harder in school in order to avoid having to get a low-skilled job to begin with. There’s also data suggesting that immigrants increase employment opportunities for skilled women by offering a relatively cheap childcare option.

The fiscal impact of more liberal immigration policy is unequivocally positive. Giving legal status to the 11 million undocumented workers in the U.S. would inject around $832 into the U.S. economy, and $109 billion in new tax revenue. The specific reform bill passed last year by the Senate (and subsequently ignored by the House of Representatives) would decrease the deficit by around $900 billion over the next 20 years.

Common Argument #3: Offering a path to citizenship would reward people who broke the law.

Your Response: In a sense, that's true. Similarly, ending prohibition, eliminating anti-sodomy laws, and giving black people the right to sit wherever they wanted to on the bus also rewarded people who broke the law. Reaching back a bit further, France's recognition of the United States as a sovereign nation during the Revolutionary War most certainly rewarded lawbreakers. The point here is that when a law itself is unjust and harmful to the country as a whole, following that law isn't a good thing.

Common Argument #4: If we keep letting immigrants in, whites will soon be a minority.

Your Response: It’s true that this is where the country is headed. According to the Census Bureau, whites will be a minority in America by 2043 if immigration and birth rates remain on their current trajectories. But why should that outcome be avoided? A white minority is only undesirable if it’s accompanied by some other negative consequence. Unless you can make a strong case as to what that consequence is, objecting to a non-white majority in and of itself is indistinguishable from racism.

Common Argument #5: Immigrants reap the benefits of the U.S. education system without paying into it.

Your Response: You’re probably referring to the 1972 Supreme Court case Plyler v. Doe, which found that states can’t deny free public education to its residents on the grounds of their immigration status.

If you disagree with that finding, you have reason to support legal immigration, not oppose it. Allowing more immigrants to obtain legal status means that more people who reap public education’s benefits will also be paying into the system. Opposing legalization, on the other hand, means more people will be doing the exact thing that you’re saying is bad. It's a no-brainer.

Common Argument #6: Immigrants will make Social Security even worse than it is now by collecting more in benefits than they pay into the system.

Your Response: Well, first of all, undocumented immigrants already pay billions in Social Security taxes, despite being ineligible to receive Social Security benefits. But furthermore, offering legal status to immigrants will strengthen Social Security, not hurt it. Baby boomers are about to place enormous pressure on Social Security, but increasing legal immigration to the U.S. offers a way to offset those costs. That’s because immigrants tend to be young — the average adult immigrant in the U.S. is only 36-years-old — and as such, they immediately pay a whole lot into into Social Security.

Your Response: So you’re okay with any English speaker coming to the U.S.? If that’s the case, you’re really arguing against multiculturalism, not immigration. You may have personal preferences about people speaking other languages in the country, but there’s no legal basis for enforcing those preferences, as the U.S. has no official language.

Moreover, the culture of the U.S. — and every nation, for that matter — isn’t static. It wasn’t the same a hundred years ago as it is now, and it won’t be the same a hundred years from now. American culture as we know today was largely formed by the immigrants who came to the country in the early 20th century. Reaching back a bit further, American culture certainly changed a lot after the first European settlers set up shop at Jamestown in 1607.

In other words, everybody in America is but one part of a constantly shifting culture. Unless you’re Native American, you really don’t have any grounds to complain about one stage of U.S. culture being better or worse than another. Glad we talked.