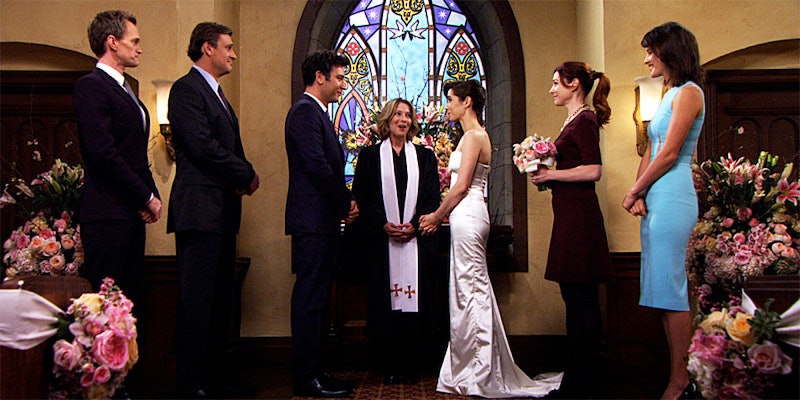 The theme of the week has definitely been "finale rage," so has CBS found a way to acquiesce fans? It seems that the How I Met Your Mother DVD may have an alternate ending, and that ending just may be what fans have been craving all week — or, let's face it, for the past nine years. So, will this bring an end to the thing that I'm going to call #Mothergate?

Maybe. We know that there were indeed scenes that were shot and omitted — for instance, we almost got the return of Robin Sparkles, and because CBS hates us (no, no, I jest — sort of), we did not. Propmaster David Baker tweeted photos of scenes that were cut, but those tweets had since been deleted. Earlier in the week, Ricardo J. Dylan blessed us with his own superfix of an edit that was pulled from YouTube and Vimeo due to rights issues. Basically, the Internet has been telling us your alternate endings can never come to realization! You must use your imagination!

Co-creators Craig Thomas and Carter Bays had the plot twist that we saw on Monday planned from the very beginning of the show, but still, thanks to editing, another version might have been cut — not with additional footage, just with some re-arrangements. Could it be similar to Dylan's cut? That seems to be the most likely option — that poignant ending, after all, with "and that, kids, is how I met your mother" worked.

And, lo and behold, thanks to the magical powers of DVDs, we may get to see this alternate ending! (But seriously — does anyone even have DVD players anymore? Have they not gone the way of VCRs and having tape players in cars?)

Superfans will likely make the purchase, which, hopefully, will also feature the other omitted scenes. I'm still crossing my fingers for some more Robin Sparkles — but what I'm really crossing my fingers for is that these extras will make their way onto Netflix or iTunes, so I can actually watch them. However, this raises the question — was this all just a ploy to create a ton of special addition features for the DVD? Is this all just a grand master scheme of a plot to revive the DVD industry, and sell more units when HIMYM is released on DVD?

There's no telling what the alternateending is (apparently, industry insiders are describing it as "happy," though) but, at this point, the only real ending we're getting is this: "And that, kids, is how I met your mother! After arguing through a bunch of different endings, virulently taking to twitter, posing alternate editing solutions, and, at long last, buying a DVD. What a journey it was."