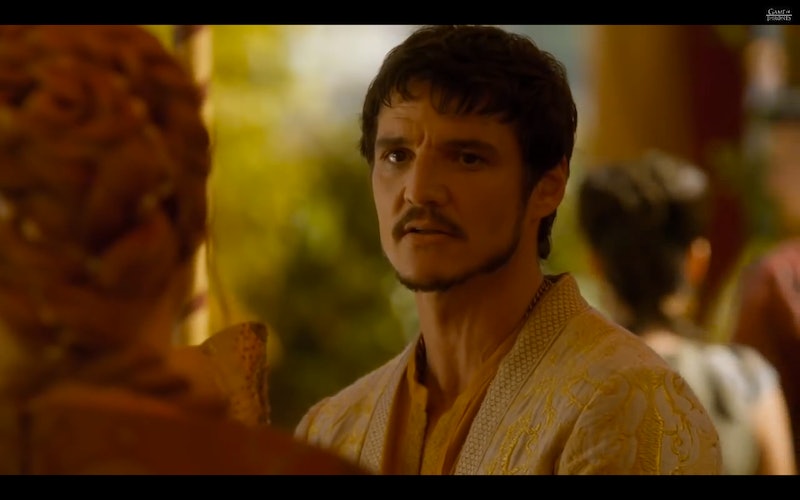 HBO's fantasy saga has not disappointed thus far in terms of sexposition. Within the first ten minutes of Game of Thrones' Season 4 premiere, we were treated with a brothel visit during which Prince Oberyn Martell chose a girl for himself and his paramour, Ellaria Sand. Then, just as we thought all nudity grounds had been covered, he turned to the young man offering the women and ordered him to remove his clothes. Ever since the first episode of the first season, in which we were treated to incest and doggy-style in the same scene, Game of Thrones has been exercising its right to walk us through a Westeros version of the Kama Sutra. And now, thanks to an infusion of Dornish men, we finally witness a foursome with two men and two women. The secret motto of House Martell is: "Sexuality is a spectrum."

The deeper significance of this incident, however, is that it shows how Oberyn plays by his own rules. He ignores Tyrion's official welcome and instead heads straight to the brothel, while his lover openly admits that she's a bastard. In addition, the first scenes reveal that Oberyn's drive for sensuality is subsumed by his drive for revenge. Upon hearing "The Rains of Castamere," Oberyn plunges into the next room and stabs a Lannister in the wrist. He tells Tyrion, "the Lannisters aren't the only ones who pay their debts," and he is owed, perhaps, the greatest debt of all. His sister Elia was raped and murdered by Gregor Clegane, and you can rest assured that Oberyn will bow, bend, and break Clegane in due time. In the meantime, however, there are plenty of brothels in King's Landing.