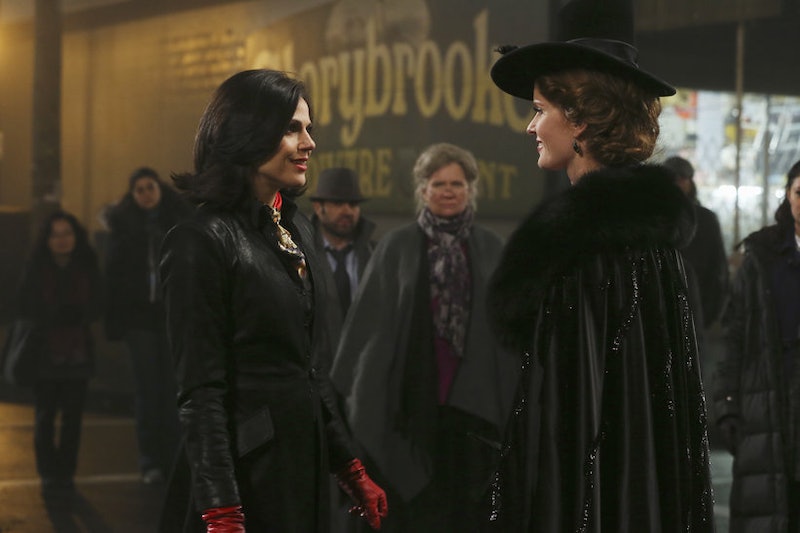 As if we didn't already know that Cora was the worst mother of all time. After last week's huge and heart-wrenching death on Once Upon a Time, Sunday night's new episode went a very different direction. "It's Not Easy Being Green" was all about why Zelena hates her sister, Regina, so damn much. And it all just boiled down to sibling rivalry and, of course, Rumpelstiltskin.

We learned a long time ago that Cora was a truly terrible mother — she did force Regina into a loveless marriage, after all — but it turns out that her daughters are more damaged than we thought. Regina and Zelena, or rather, The Wicked Witch and The Evil Queen, are incredibly insecure. A lot of Sunday night's episode happened in flashbacks to the characters' formative years as The Dark One's students in the Enchanted Forest, as it attempted to explain why the pair were having a rumble in the streets of Storybrooke.

So here's the gist: Cora, being the incredibly terrible kind-of human being that she is, sniffed out the weakest link (Zelena) and abandoned her in Oz. Her pre-green daughter found out that she had a sister (Regina) and that she was being trained by Rumpel — obviously she was jealous and ended up with her own version of Dorothy's ruby slippers and traveled to the Enchanted Forest. Rumpel checked out her magic, determined that she was "the most powerful" and agreed to train her — but he never stopped training Regina, and Zelena really hated that. She ended up quitting her training and running off to Oz where she turned the Wizard into her first flying monkey and the rest is history that leaves us in present-day Storybrooke.

Obviously, Zelena's been abandoned and her mother basically never loved her, so we get that she's got some self-esteem issues. You'd probably have them too with a mother like Cora. But anyway, the fact that she's incredibly powerful and that Rumpel jumped at the chance to train her, without her mother's persuasion, is kind of a big deal that she really takes for granted. He called her the most powerful witch he'd ever seen, for crying out loud. Old wounds cut deep though, I suppose, and she proved herself to be weakened by her jealousy and her overwhelming desire to please others. And when Rumpel told her that she wasn't strong enough to cast his curse because she couldn't make the ultimate sacrifice, she just became angry and more insecure — thus resulting in lashing out and turning humans into evil monkeys.

Regina, on the other hand, has always been kind of insecure, too — mostly because she spent her whole life with Cora. Nothing she did was ever good enough for her mother, who just kept her around so she could marry her off to elevate her status in the world. (Great parenting, woo.) And after years of wearing of her down, Regina doesn't feel like anything she does is good enough either — which is why, in the present day, when she finds out that Rumpel wasn't calling her the most powerful witch in that old letter to her mother, she snaps.

The obvious problem here is parenting (OUAT has some of the worst parents on TV) — and Rumpel playing both ends against the middle. He pitted Regina and Zelena against one another on purpose, thinking that competition would motivate them and reveal who could cast his curse — and it worked. And Cora abandoned one child and emotionally abused the other.

So who fared worse from this tragic and terrible upbringing? It'd be fair to say Regina — who ended up killing her father and spent her life feeling nothing for no one — but I think Zelena got the short end of the stick. Regina was able to live blissfully unaware that she had a sister while Zelena lived every day with the fact that her mother chose her sister over her and that she believed in her other child more. Nice job, Rumpel — look at the bind you're in now because of your little games.