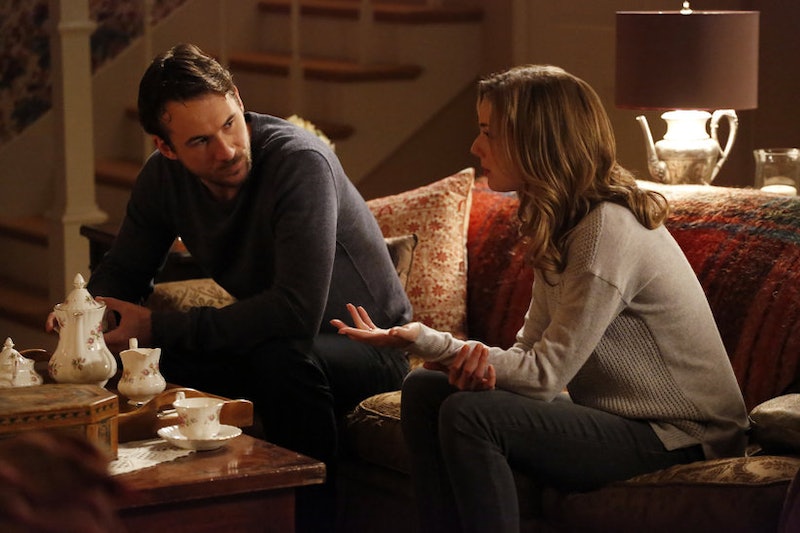 Oh, Revenge — just when we thought we'd seen the last of romance, Aiden and Emily Thorne are officially back on. After last week's failure on Monte Carlo night, everyone's favorite woman-on-the-verge left the Hamptons for some necessary R&R. Well, not really — Emily took an obviously emotionally scarred Aiden to visit his estranged mother where, in a soapy moment, emotions ran high and they fell back into each other's arms. And here we are again with their distracting and over-emotional relationship running things again.

On Sunday night's episode, "Blood," we got some flashbacks to Aiden's past, an introduction to his mother (who seems really sweet, go figure), and a huge reveal. But mostly, Emily and Aiden are engaged and fully back on — after he basically told Emily to f-off when she popped up at his favorite tiki bar asking for help last week. God, how I love the dysfunctional relationship between these two — it's just so much better than Daniel's whining and complaining. But anyway, Aiden popped up on Nolan's couch at the end of last week's episode and he agreed to help Emily, hence the trip to his mother's house and the obvious moments indicating that they were totally getting back together.

First, they showed up at his mother's door — after he disappeared as a teenager and never called or wrote, by the way — and Aiden announced that Emily is his fiancé. Which she's obviously not, because they broke off the engagement a while ago, but we went with it because who knows. Then, Emily shared an emotional moment with Aiden's mom, during which she revealed that she also lost her father very young and she's deeply scarred because of it. Their bond is special, people. Mrs. Mathis also shared with the pretend-future-Mrs. Mathis the sentimental value of her engagement ring. (It belonged to Aiden's grandmother, aw.) Emily and Aiden also shared an emotional moment in the room where his father killed himself — Emily walked in, Aiden's stared at the floor, and then he broke down, remembering their good times together. Oh and also, Aiden's mom had no idea that his sister, Colleen, died a long time ago, so Emily's all like, "You need to tell her." So, really, we should've seen it coming that they were OBVIOUSLY going to get back together by the end of this episode. At least, the aforementioned scenes were all signs that they were headed back into their relationship ASAP.

So they sat down with Mrs. Mathis — obviously starting the conversation with the fact that they're not really engaged. Aiden just wanted to have some good news for her. Unfortunately, he was the bearer of bad news, having to tell his mother that her daughter's been dead for some time and no one told her. (Sigh.) But something good came out of this conversation — Emily learned that the missing piece to the Pascal-Victoria-Conrad puzzle — or rather, the missing person — might not actually be dead and Aiden got a bit of closure on his father's death. (His father was being tasked with planting a bomb on said plane that incriminated David Clarke, but decided on suicide instead of completing the mission.) And there you have it, the final driving factor in the Emily-Aiden reunion.

Because they're both so deeply ingrained in Emily's plot, this huge revelation and their little trip had them all emotional, realizing that they're the only two people in the world that understand each other. (Also, Aiden's accent is dreamy.) The pair fell into each other's arms and we flashed to a scene of them, in bed, with Emily staring lovingly at the engagement ring Aiden gave her to wear. And as easy as that, they're back on and the romance of Revenge continues. I mean, we all knew that Emily wasn't going to stay single or away from Aiden for that long, right? And she definitely wasn't going to let Victoria have all of the fun.