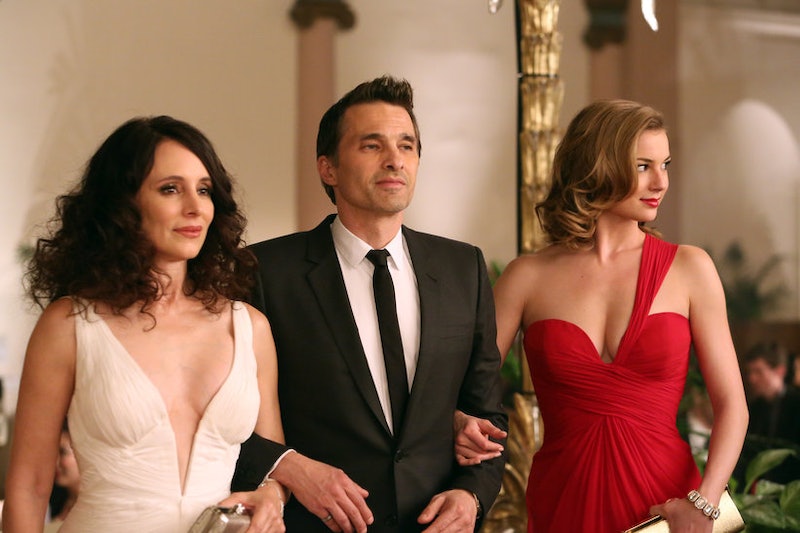 When will everyone learn that nothing good ever happens at a Monte Carlo-themed night? We were concerned for Emily's next move after last week's episode of ABC's Revenge — and clearly my intuition about this show is spot on. Because on Sunday night's episode, the former Mrs. Grayson threw a Monte Carlo night as a cover for her next move and that was a HUGE mistake. Hasn't she ever seen The O.C.?

A few weeks ago we came to the conclusion that Victoria's illegitimate son, Patrick, obviously watched The O.C. and modeled his behavior after one, Ryan Atwood. But apparently, Emily hasn't – which would make sense since she spent a lot of time in juvy and the rest of her teenage years on an island taking combat lessons from Takeda. Even so, there's no way that she hasn't taken a sick day in the past few years and binge-watched the FOX series that reinvented the primetime soap opera. But whatever — on Sunday night Emily Thorne hosted a Monte Carlo night and we just felt sorry for her because we knew something she didn't, thanks to The O.C.

Emily threw her little party to benefit Olivier Martinez's Pascal DeMarchel's French charity — and to impress him with her high-stakes poker abilities. Well, and to pump him for information about the missing piece to her Grayson destruction puzzle. But lots of tables turned on her — first, he pulled Victoria to the table in her place, then Victoria let Emily win the final hand, and last but certainly not least, he proved that he would be an ally by trying to incriminate her on record. See, I told you nothing good happens at a Monte Carlo event. Emily showed her hand — literally and figuratively — to DeMarchel and now she's screwed all because Monte Carlo night is historically, always a damn disaster.

For any non-O.C. fans in the building, the Season 1 episode of The O.C. — "The Gamble" — featured a Monte Carlo charity night that was an epic disaster. Ryan's mom turned up in Newport with a drinking problem (that she tried to hide) and convinced Sandy and Kirsten that she should come to the party — then she trashed it. Oh, and Summer led Seth on for her own gain and Ryan dealt with the aftershock of Marissa and Luke. Overall, it was just a bad and uncomfortable night for everyone — which leads us to Sunday's Revenge.

The Turning of Tables

On "The Gamble," Mrs. Atwood, in her drunken and gambling-fueled stupor, literally turned the tables over in the middle of the event. She stumbled into a waiter — who she hit impressively hard — who then went flying onto a nearby table and knocked it over. Ryan's mommy dearest then had a meltdown in the middle of the party and that's pretty much where it ended — epic disaster. On Sunday night's "Addiction," Emily got the tables figuratively turned over on her and the entire revenge operation. Because she's been at this for a long time and Victoria Grayson's finally wised up to her act — Victoria proved that she's the big dog and that Emily's going to have to try a lot harder to turn her friends against her. Emily's disaster was a little less dysfunctional — but a hell of a lot more life-or-death.

There always has to be one — and much like Summer manipulating Seth — Daniel Grayson manipulated Margaux into blowing some good luck onto his dice Sunday night. Which was uncomfortable for everyone, but mostly Jack. Who's in the dog house because Daniel, like the evil snake that he is, manipulated Margaux into believing that Jack wanted to ship her off to Rome for an amazing new job so that he could be free to date Emily (when really he just wanted the best for her). Either way, there was uncomfortable manipulated at the dice table and Daniel won, as if he needed to.

The Luke-Marissa-Ryan triangle re-imagined is essentially what Sunday night's Victoria-Pascal-Emily situation was. In both a symbolic and ironic turn of events, Pascal found himself with Victoria (in white) and Emily (in red) on his arms — and now we can't tell who's the devil and who's the angel anymore. But either way — Luke and Ryan butted heads over Marissa at Monte Carlo night because they were in high school and in love with the same brainless wonder. Victoria and Emily were butting heads over who's got the biggest mean streak in the Hamptons and Pascal just so happened to be the deciding factor. Emily won her hand, but Victoria won the war by revealing at the end of the episode that she and Pascal had planned this trap of convincing Emily that she was in Pascal's good graces the entire time. Victoria's one step closer to figuring out why Emily's been so interested in the Grayson family and after another week of Revenge, we're left feeling worried for her. Because she really seems like she's slipping — just like Ryan down the slippery, melodramatic slope that was Marissa Cooper.

More like this
Why Simone Ashley Had To Study Snails For Intimacy Training, Pre-‘Bridgerton’
By Grace Wehniainen
At 14, Kate Berlant Had A Wheelie Backpack & One Line In 'Lizzie McGuire'
By Samantha Rollins
Don't Expect To See Your Fave Modern Royals Depicted On 'The Crown' Season 6
By Jack Irvin
James Marsden Kept Teddy’s Westworld Season 4 Return A Secret “For Years”
By Brad Witter
Get Even More From Bustle — Sign Up For The Newsletter