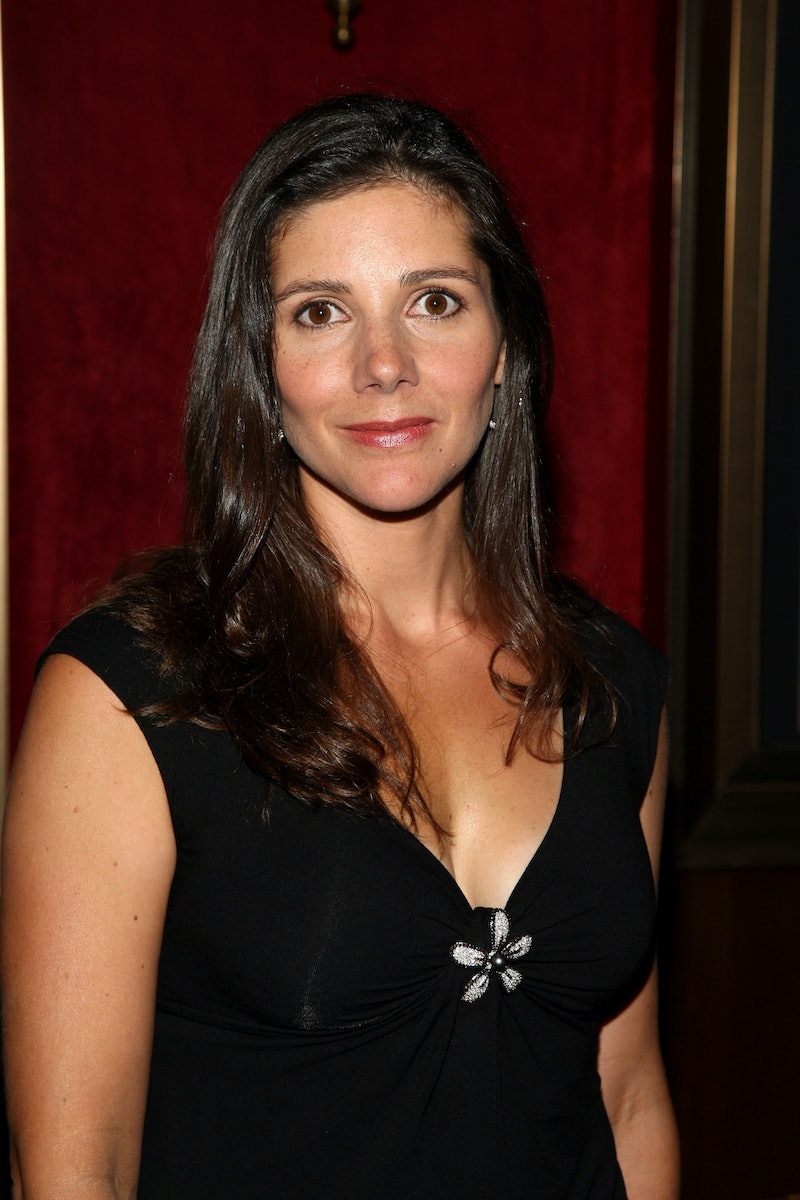 Perhaps best known for her widely successful The Sisterhood of the Traveling Pants series, Ann Brashares knows a thing or two about young adult literature. But that doesn't mean she stays stuck in one genre. Brashares has ventured into adult literature in Sisterhood Everlasting, a companion novel to her popular series, and The Last Summer (of You and Me). In her latest novel release, The Here and Now (Delacorte), Brashares has gone back to her YA roots, but she takes a turn from the adventures of a circle of friends into a sci-fi story complete with time travel.

Brashares recently spoke with Bustle about her latest work, her proliferation of strong female characters, and how she copes with the stigma attached to the "young adult" literature genre.

BUSTLE: The Here and Now has a much different feel and plot from your work on The Sisterhood of the Traveling Pants. Where did you get the idea for the story, and was it a conscious effort to write toward a new genre, sci-fi?

ANN BRASHARES: It wasn't one of those books I would just read a billion times, but this one, The Summer of My German Solider, I liked a lot. And somehow or another the idea of it sort of stuck. I was sort of interested in doing something like that. I knew I wanted — the premise of this book is that there's this german POW in Arkansas in the war, and this girl hides him in her attic.

So I had the idea of taking two teenagers from such radically different life experiences and throw them together. It turned out that instead of trying to go historical, I went the other direction. I flipped the genders, too. So now the character that comes from this warn-torn, terrible place, who is hiding and has a lot of secrets is the girl, Prenna. And this semi-ordinary suburban teenager she's thrust upon is Ethan. And that was where it began. And once I had sent her from the future, that opened up — little did I know at the time — quite a long and unexpected road.

Were you inspired by any other pop culture notions of time travel and sci-fi?

I do love time travel, even if it's done in a sort of dopey way like Back to the Future — I'm a total sucker for those movies. I loved The Time Traveler's Wife, which involves time travel, but isn't your standard time-travel kind of a story. There was actually a book I read when I was about 12 or 13 called Hanging out with Cici by Francine Pascal, later of Sweet Valley High fame. ... It was about a girl who is 14 and she's having these stort of typical difficulties with her mother ... and she thinks, my mother was never like me, she never would understand what I'm going through. And she goes back in time and meets her mother as a very rebellious 14-year-old. That book I adored, but I am no connoisseur of time travel, so I felt like I needed to do a huge lot of thinking and work in order to just think about the ground rules and how this works. ... It took me a lot of head in my hands at my desk.

If you were a time traveler, where would you go back to and why?

I tend to be really interested in periods of seeming innocence. I love the period in Europe before the First World War, that period of sort of brightness and innocence...

One of my aunts was at this nightclub when she was a teenager, and who came out and performed but Jimi Hendrix, early in his career. There are certain moments like that that would be really fun. I love Mozart operas, so the thought of going back and watching him perform or hearing him conduct the Marriage of Figaro. Just these short moments.

With Prenna in The Here and Now, the Sisterhood girls, and the girls in 3 Willows, you often write strong female characters as main protagonists — is that something that's important to you?

It's not a concious effort, but it's always subject matter I am drawn to. I love writing about girls and women, and I think as a young reader, I was so deeply connected to the books I read. I tended to gravitate toward books about women, about girls, and about sisters, friends, mothers and daughters. And I think there was a huge comfort in it and I could sort of burrow my way in and live among them.

I got to read a lot of very strong characters. In books, great courage can be rewarded, and that's something I've unconsciously carried on into my own books. Strong female characters who I challenge with doing the brave thing — and I'm not trying to write didactic books — but in the real world courage isn't always rewarded, it can become punished. I like the idea of the brave girl prevailing, even if it's just in her own spirit.

I like the idea of the brave girl prevailing, even if it's just in her own spirit.

There are a lot of environmental and other societal issues in the present day in The Here and Now that leads to destruction in the future. Would you consider this novel a call to action?

I wouldn't say I set out to make it be a call to action. The more I thought about the subject and the more I thought, 'God, how would we look from 80 years in the future, we all know what's happening?' And that's what Prenna can't believe. This didn't happen because nobody saw it coming. Just nobody did anything.

While I was writing the book I did feel more of a sense of, 'Why can't we put together some strength on this subject? Why is everybody so afraid of this?' I did feel acutely, the general societal apathy about this. A lot of people care, but our politicians are not leading us on this. I don't know that my book is going to make a difference — I'm not writing for social change — but I guess on some level metaphor can be more powerful than fact. So here's a metaphor. Maybe it will make a difference....

If there's a way to help give voice to generations to come — because they're the ones that will be left with this mess — I hope they find that voice about it because we haven't done such a great job.

You've ventured into both YA and adult literature — are there different procedures or mindsets for writing for one or the other? Both for you as a writer and the involvement in the publishing house?

I don't necessarily from my own part make a clear distinction between adult and young adult. I tend to be interested in characters roughly between 16 and 22... If you write a book about a 22 year old, the way that's different from writing about a 16 year old, for me, is that a typically write a very closely aligned point of view, actually trying to see the world as a 22-year-old, and that 22-year-old really shapes my experience. I try to see the world through her eyes — what is she thinking about? what is she caring about? what does she perceive? where on the ladder of life is she? What does she see from there? And it's different if I'm writing about a 16-year-old. So that's really the difference from a writing standpoint...

As far as publishing, publishers need to make distinctions. They need to know how to market a book, how to sell a book, adn how to find an audience. It's more of a publishing issue than it's a writers' issue. I don't really draw a huge distinction between books that have been published as young adult or adult.

Do you feel a stigma writing YA?

You know what? I don't at all. In spite of the fact that I have written books that have been published as "adult" I don't think there's any difference. I know people think YA isn't "real literature" or they're not "real" books for people in the literary community, maybe, but I so fundamentally disagree. And I think one of the reasons why young adult is so wonderful and why it's so particularly strong now is because I think in adult publishing they make too much of a distinction between "literary" books and books with stories. So there's commercial, and then there's literary. And they're separate. And to its great credit, I don't think young adult separates like that. I think really good young adult books — and there are many of them — have absolutely no issue with 'Oh if it's good, it can't be interesting, it can't be accessible.' Great books can be fun to read; there absolutely doesn't have to be a distinction between fun and good.

I know people think YA isn't 'real literature' or they're not 'real' books for people in the literary community, maybe, but I so fundamentally disagree.

Do you ever plan on returning back to Bridget, Lena and Carmen?

...Characters don't end when your books end. If you really bleed in them and imagine them fully, they exist before your book starts and after your book ends. And those girls really do for me, still... I don't know that I will write about them again, but they do stay with me.

I'm starting on something new, and it's in that fragile stage where I'm worried if I try to cup my hands around it it will float away. I'm tentatively working on it and starting to get excited about it. And it's probably YA.