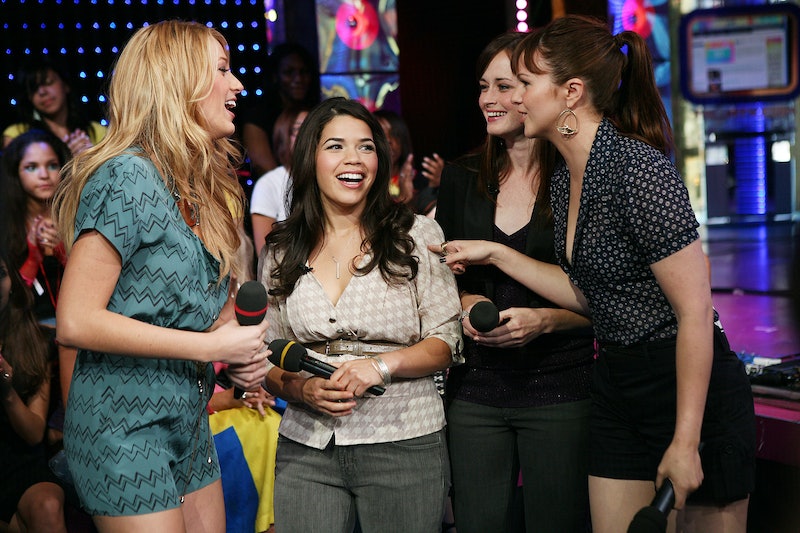 During the "Beach House" episode in season 4's Girls, Hannah writes, "A friendship between college girls is grander and more dramatic than any romance.” And isn't that the case, even, I'd say, in high school, as well? The problem, however, is that young adult fiction is far more focused on romantic relationships than on portraying some of the most "grand, dramatic" relationships girls have with their circle of friends.

When you can find examples of female friendship in YA fiction, they are often troubled, "mean girl" types, or a side story from the driving force of romantic relationship, or even, one-sided in the most one-sided way possible: a girl copes with another girl friend's death.

On Stacked, guest bloggers Jessica Spotswood and Morgan Matson discussed positive girl friendships in YA novels. Matson, who wrote 2012's Second Chance Summer, commented on her own lack of female friendships in her novel:

But when I think back on my high school experience, the boys were the cameos and exciting guest stars, while my friends were the series regulars. Friendship was, in experience, more important to me than romance.

Matson brings up an interesting point about why this may be happening. Maybe it's not some deep-seeded feminist issues; maybe it's just, well, the easiest path.

Riley Redgate at the blog From the Write Angle discussed women as friends in pop culture back in 2012 and brought up another interesting point. While male friends have the (albeit annoying) term "bromance," there seems to be no matching word for women. Is this because friendships of this type are so underrepresented? And in YA, where the audience is these young female readers who are looking for books they can relate to, this is even more troubling.

Even Hermione Granger in Harry Potter, one of my favorite characters of all time, has a sad deficit of onscreen interaction with other ladies. This is partially because of the close-3rd narration from Harry's perspective, of course, but it's still disheartening to see her most noteworthy interaction with another girl her age being the typical jealousy (over Lavender Brown getting together with her crush).

Despite these issues, there are many YA novelists who are looking to showcase the real high school friendship experience, which means positive female friendships. We need more friends like the following 8 "womances." (Can we work with that?)

Yes, each of the girls get a love interest through the Sisterhood of the Traveling Pants series, but when it comes to an end, it all comes back to friendship. (Let's forget about the standalone adult novel second conclusion, Sisterhood Everlasting, which has some serious issues.) In Forever in Blue, the girls are experience pregnancy scares, estranged family issues, and breakups, and it's the power of their friendship, not the magical pants, that makes them stronger and pulls them together.

When we're talking about honest, positive friendships women can relate to, we don't first go to Nazis and a Scottish Flight Officer for the Royal Air Force in 1943. But we have Elizabeth's Wein's YA spy novel Code Name Verity, and we have Queenie, "Verity," and Maddie. The novel centers on a covert mission, a captured spy, and the courage that comes from friendship.

This may not be a traditional friendship, because Cinder is a cyborg and Iko is an android, but the two show that sometimes opposites do make great, strong friends. In the Lunar Chronicles series, Cinder is tasked with saving the world from an evil queen, and so she's often hard at work, ambitious, and focused. Meanwhile, Iko cracks jokes and always tries to lighten the mood so Cinder can relax. The pair have been through a lot of hardship together, but their friendship isn't focused on how terrible everything is.And they've both proven to go to great lengths to save the other.

Hear me out: Yes there are mean girl friendships in the Pretty Little Liars series. Alison is pretty heinous as a best friend. But though the chaos that "A" unleashes in their lives, Hanna, Aria, Emily, and Spencer have stuck by each other and proven they'll always be there in a flash with any "S.O.S." text.

In Open Road Summer , Reagan has had a tough time. She just broke up with her boyfriend, who was bad news, and she's looking for a change. Her best friend happens to be a country music superstar, Lilah Montgomergy, and Lilah happens to be dealing with a broken heart herself. Reagan and Liliah take to the road, and deal with all sorts of ups and downs, but the one constant is that these two would do anything for each other.

In a dystopian series where love is a disease, I didn't expect for a strong female friendship to shine through. But that's exactly how Lauren Oliver chose to (spoiler alert!) end her Delirium series. Lena and Hana grew up as best friends, but they took separate paths in life as Lena ran away into the Wilds and Hana chose to stay and become "cured" of deliria. In Requiem , though, after everything it's Hana and Lena, that save each other.

Sarah Dessen is one of those writers that seemed to never get the memo that female friendships were lacking in YA. Many of her novels have wonderful, tightly knit girl friends. But Someone Like You is arguably the best example. In Dessen's novel, Scarlett's boyfriend just died in a tragic accident, and Halley, who always looked to Scarlett, has to step up and be her rock. In the story, it's friendship, more than anything, that lasts forever.

Two women authors writing about two women friends — it's a wonderful thing. What's even more wonderful is that while, yes, there are boys, Roomies really comes down to friendship, both new and figuring out how to keep the old. The novel is set the summer before going off to college, and Elizabeth and Lauren are assigned to be rooming together. The new friendship already goes through ups and downs, but it's also part of what illuminates the idea of friendship in both girls' minds as they look to leave their old friends behind.