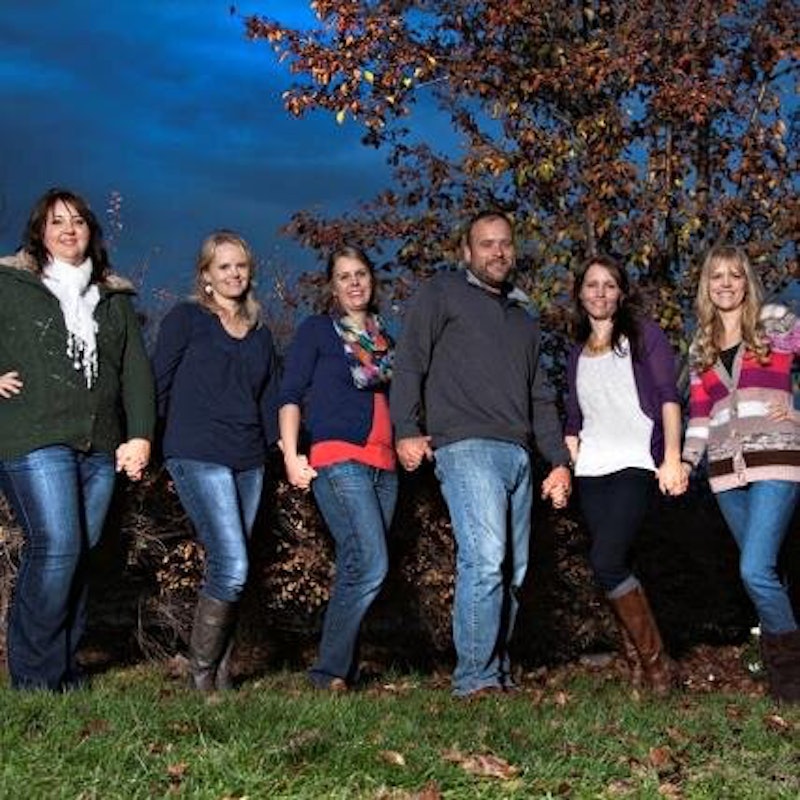 TLC really likes to capitalize on its successful shows, just consider how many variations of Say Yes to the Dress make up the channel's weekly "Bride Day." So it came as no surprise when they premiered a second show about polygamy, My Five Wives to join Sister Wives. For many of us, these shows offer a look into a completely unfamiliar lifestyle and as our only points of reference into the polygamist world, it's hard not to compare them.

The Williams family of My Five Wives presents themselves as "progressive polygamists," and husband Brady even identifies as a feminist. Yet while the Williams are certainly more progressive than the Browns of Sister Wives in many ways, they can also be more problematic—based on what has been shown on TV. It's impossibly to truly understand a family solely from a reality show that goes through an entire production process, but by priding themselves on their progressivism, especially in comparison to other polygamist families like the Browns, and going on TV, the Williams have essentially opened themselves to analysis.

Here's how the Williams are different from the Browns, and how those differences make the My Five Wives Family both more progressive and more problematic.

As the title states, My Five Wives is about a family with one husband and his five wives. While the Browns' patriarch Cody only ("only") has four wives and 17 children, the Williams family is made up of Brady, Paulie, Robyn, Rosemary, Nonie, Rhonda and their 24 children. Currently, the Brown women live in four separate, neighboring houses in Nevada, and the Williams split two large adjacent houses into five living spaces.

Both families consistently defend their chosen lifestyle, with each wife confirming in the opening credits that they chose to be part of a plural marriage.

This is where the Williams' touted progressivism comes into play. Originally, the family belonged to the Apostolic United Brethren sect of Fundamentalist Mormonism, but they left the religion because, as Robyn explained to The Atlantic , "I think we kind of went from an exclusive viewpoint to an inclusive one." What does that mean? They disagreed with the AUB's teaching that only polygamists go to heaven, since they didn't want their kids to be forced into polygamy, and other exclusionary ideals. The Williams support gender and marriage equality, and are okay with the opposite of polygamy, polyandry, when a woman has multiple husbands.

The family is still religious, just in a more independent way. They pray regularly, but incorporate buddhist ideas into their beliefs. It is considerably progressive for a group of people raised as Fundamentalist Mormons, a conservative group, to support marriage equality, however subscribing to Buddhist ideas isn't really progressive, especially since the Williams are kind of in their own religion now, they can do whatever they want.

However the Browns still identify as Fundamentalist Mormons and they also support marriage equality and don't want any of their children to feel pressured to choose polygamy for their own marriages. They may not practice Buddhism, but the Sister Wives seem progressive by My Five Wives standards. Their only other perceivable religious difference is that like most Mormons, the Browns do not drink alcohol, while the Williams do.

Despite the idealism shown in various promos for My Five Wives, after watching a few episodes of both shows, it just seems like the Brown women have a better relationship than the Williams wives. It's hard to explain, but the Sister Wives lives just seem to be more fully integrated with lots of family meals, kids always shuttling between the four homes and relationships that seem like genuine friendships between many of the wives. On My Five Wives, the five women seem to have more distinct lives.

That's not a bad thing, but it does seem to go against the very core idea of both shows, Even the series' titles make the Williams women seem more distant. Brady's wives also seem to struggle with loneliness much more than the Browns. He rotates which home he sleeps in each night, so each wife sees him every fifth night. In multiple episodes, the wives comment on how hard it is when it's not "their night" and one wife even made body pillow resembling Brady for all of them to cuddle with when they're alone. Brady is all about equality, but each of his five wives is lonely and maybe even unhappy for four days straight, while he gets a companion every day.

There's no doubt that compared to the Browns, the Williams have more progressive attitudes when it comes to sex, or at least talking about sex. On Sister Wives, sex is rarely discussed. The family has clarified that there's no group sex or anything like that, but beyond that, they won't discuss it. The Williams are much more open, besides also confirming that there's nothing freaky going on, they speaking plainly about sex. They've discussed birth control on the show as well as jealousy when it comes to sex, and we even see related candid conversations on the show.

But the openness in discussing their own sexualities is where this progressivism ends. In a recent episode, Brady decided to talk to his teenaged children about dating and in no way could it ever be called progressive or feminist. The issue started when first wife Paulie said that one of her daughters was under the impression that a boy needed Brady's permission to hold her hand. Paulie disagreed and told Brady they should probably talk to the daughter about rules and expectations. Brady turned this into a group meeting, which Paulie didn't seem too crazy about, and without a single one of his wives being involved, Brady laid down the dating law.

The Williams kids are allowed to go on group dates at 16 and one-on-one dates at 18. A few kids protested this, but when the only reason they cited was "that's too old," Brady overruled. And though he didn't make it a specific rule, he told his kids that he didn't kiss any of his wives until they were engaged. Cut to 15-year-old daughter September's talking head, about how she doesn't think you have to be engaged to kiss someone, and as long as you both feel you're ready, shouldn't let a rule hold you back. Preach, September. Next, Brady declared that there is to be no pre-marital sex. His reasoning for all of this? He doesn't want his kids to be "flippant with their bodies."

Sorry Brady, you're not a feminist. While I can't see any father, no matter how feminist, actually condoning their teenaged daughters having sex, Brady took the protective role to an extreme. He ignored his kids' opinions on the strict dating rules and seemed to have no regard for their own feelings. We also have to wonder how the five moms felt about all of these rules. Maybe at least one of them would be okay with her kids dating before 18, or wouldn't have wanted Brady to discourage them from kissing. At the very least by policing his daughters' bodies, and essentially ignoring actual womens' opinions, Brady lost his self-granted feminist card.

The key difference between the Browns and Williams when it comes to feminism? The Browns don't claim to be feminists, and the fact that Brady and all five of his wives do is exactly what causes the biggest problem with their progressive label. Aside from the issue of whether it's truly possible to be both a feminist and polygamist, especially for the man at the center of the relationship, many of Brady's actions aren't feminist.

For the wives it's more debatable, but if Brady really wants to be considered a feminist, he's going to have to try harder. As he works his way towards a degree in philosophy, Brady is taking a class on feminist theory, which must be where he decided to identify as one. If his attitude towards his kids' dating lives isn't enough prove, he's one other things that question his values, one notably involving his fifth wife, Rhonda.

Rhonda works as a medical assistant, and she's not the only Williams wife to work outside the home. Paulie is a dental hygienist and Nonie does administrative work for Brady's construction company. However in a recent episode, Brady told Rhonda that he thinks she could quit her job, because her kids need her. When Rhonda says she's worried about finances and thinks she should keep it, he basically tells her not to worry about the money, and that if they are successful in their adoption efforts, she'll just quit then anyway. Um, what?

Who says she has to quit? Plenty of women keep working after having a baby, whether they carry it themselves or adopt. In her talking head, Rhonda also makes it pretty clear that money isn't the only reason she works. She says that she loves her job and would never want to have to find a different one, and says she wishes Brady would back off. And even if money was the reason, if it's important to Rhonda to financially contribute to the family regardless of their current situation, that's her right. Brady is essentially using Rhonda's children to guilt her into quitting her job, which is about as un-feminist as it gets.

Oh wait, until he sends Paulie to try to convince her too, essentially using one wife against another. Paulie gets a better excuse to ask Rhonda to leave, as Rhonda is worried that she might have breast cancer and is undergoing tests to check for the disease. But Brady brought up quitting before any of that was discussed and dispatched Paulie before she did either.

Brady couldn't have been paying much attention in that feminism class. In a few small ways, or compared to the majority of the Fundamentalist Mormon community, then maybe yes, the Williams family is progressive. But overall, they've got a lot of work to do if they want to be praised as TLC's "progressive polygamists."