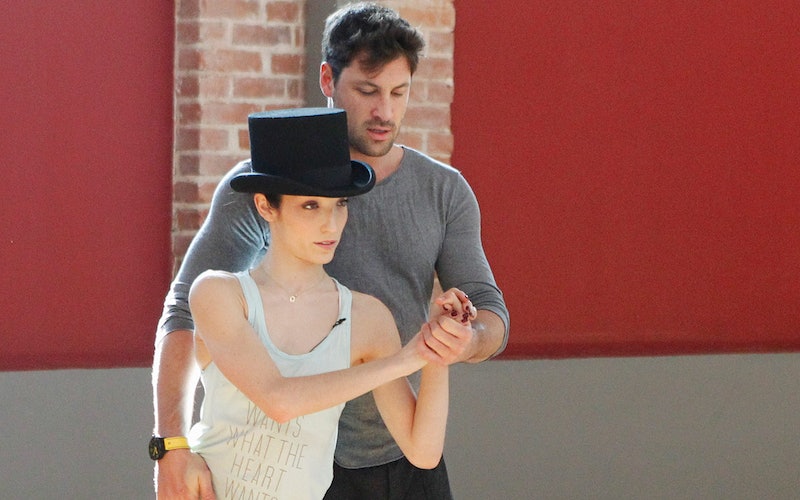 Day One: I know, I know — that's my brother Maks up there. Maksim, if you want to be all formal about it. He's the one that gets all the attention, probably because he's prone to regular outbursts and always, always has to have the last word in any conversation (even if it's not a conversation at all). But I'm losing the thread here, because this isn't about him. It's about me, Val — the baby. I've been a Dancing with the Stars pro for the past six seasons. And I've been in love with Meryl Davis, my brother's partner, for the past 24 hours.

It's 11 o'clock or so, a late night in Tinseltown, as I write these thoughts in you, my diary. So much is coursing through my head. "She's Maks' partner," I tell myself. "They're definitely into each other." These thoughts I don't want but can't ignore but you know what, I don't care. I never felt this way with Sherri Shepherd. Meryl strolls into the studio looking like one of those Disney princesses trailed by cartoon birds and forget dancing — I just want to sing. But for now, I write.

Day Two: I braided Mer's hair today. Is that the angle I should play, the sensitive best friend? Diary, I don't know how these things work! Maks is so masculine and confident. He yells and punches things and owns what I presume to be a lot of leather, though he's never actually invited me over to leaf through his closet. Me on the other hand — I'm sensitive. I'm soft. I feel like I should be highlighting that to Mer, even going completely overboard in that direction, so she can see there is more than one way to be a Chmerkovskiy. (Did you know that sometimes I forget how to spell my own name?) Maybe hair-braiding is too much. Am I totally friend-zoning myself?!?

PS — she hasn't heard me call her "Mer" yet, but I'm working up the courage. Maybe Thursday? I think it will feel more appropriate then.

Day Three: Maks strutted into the studio today like Danny Zuko (he was wearing leather) all "so you taking care of my girl?" and "LOL I'm just playing bro, I know nothing's gonna happen here." Jerk. It's totally going to happen, I'm just waiting for the right moment. Mer's a sweet daffodil of a woman with a face that looks like fabric softener feels and how dare you, Maks, you neanderthal. Gosh, I'm getting so heated at my brother! Mer ran over to Maks when he came in and hugged and kissed him and patted his butt and said "I remember this" but it's fine, she's playful like that. Sure, I would have preferred her not say, "Maks, your brother is like the sister I never had!" or let him know that we watched Mean Girls together, twice, but I love how she speaks her mind. I'd never want her to keep anything inside. Anyway, I know she appreciated it when I left the room to grab everyone some Dasanis. When I got back she told me she was "really, really, really thirsty!"

Diary, is this what a love triangle feels like?

Day Four: Sometimes you just know, you know? That someone's right for you? I felt it today when Mer and I were grabbing lunch in the DWTS cafeteria and she and I, totally unbeknownst to each other, got the exact same meal. "Hey," I said, pointing to her tray, then mine. "That's crazy." Diary, it was like looking into a mirror. Chicken cutlets, broccoli flourishes — identical. We both even had two cups of water, which — not everyone does that. Mer laughed that cute, cautious laugh of hers (I love that laugh!) before putting her earbuds in. "I'm going to listen to some music, Val, get pumped for the afternoon." Would you believe it if I told you I do the exact same thing?!? I asked what she was listening to — the Frozen soundtrack.

Would you believe it if I told you FAVORITE SOUNDTRACK OF ALL TIME?!?!? I would voluntarily withdraw from this season of DWTS tomorrow if it meant Mer and I could get married one day sooner.

Day Five: Well, Diary, big day. Are you ready for this one? After rehearsal today, Mer asked me if I thought that two co-workers should pursue a romantic relationship. "Ahh," I said, slyly. "I think I know what you're talking about." Mer gave me this crooked, pained half-smile that told me she and I were definitely on the same page. I decided it was time to reveal my true feelings, just in a way where I didn't come out and say them directly. Hoo boy.

"Well, I think that professional entanglements shouldn't stop two very attractive and mid-to-late-80s-born people from following their hearts. Especially when those hearts are beating heavily in their chests." I held my hand to my chest for extra emphasis. I wondered if I should kiss her, but thought better of it. No need to rush things!

"Val, I'm so glad you feel that way!" She was looking at me with such excitement, such hunger. Maybe she would kiss me?!? "It means the world that you'd give me and Maks your blessing!" That I'd — what was she talking about?

"Mer, what are you talking about?" "'Mer'?" she responded. So she didn't like the nickname. Okay, maybe something else? "What if I just called you 'M'? That's fun." She shook her head, which told me she probably didn't think that was fun. Or maybe she's just not a nickname person.

I didn't have much more time to think of new nicknames for the Love of My Life when Maks came in. This time he was completely shirtless. Then Meryl — wait, now Meryl was shirtless, and running at him like he was a soldier just returned from war. I watched them kiss in a moment that seemed to last as long as our DWTS episodes. The chemistry was there. The explosive energy. I saw in them everything I'd been trying — without success — to recreate with her over the last week.

And Diary, in that moment...I got it.

Day Seven: Meryl and I wait backstage to do our tango, the one we've been practicing all week. She looks stunning, as always, but I'd never tell her. Not anymore, anyway. We're not really talking in a non-professional context. The opening synth notes of that song "Closer," the one they used to promote the new, cool Internet Explorer last fall come roaring out of the speakers and every part of me wants to die. I hate that song. I hate this dance we're about to do. But you know what? We're going to fucking kill it.

39/40. I'd be happier with the score if it weren't exactly what Meryl and Maks landed last week, but you know what? Even if it puts you on equal footing with the brother who's completely emasculated you, one off perfection isn't bad.

Meryl pats me on the back. "Thank you so much for this week, Val. You taught me so much." I smile, weakly. "Do you think that we might be friends?" she asks. "You know, even with me and Maks being drunk in love with each other?"

I think back on the week we've had together. The eating. The laughing. The Means Girls, twice. And for all the pain I'm feeling right now at the thought of this Raphaelite painting brought to life physically entwined with my woodsman-looking older brother, it's tempered by a love I've never felt before and may never feel again. My wonderful, heartbreaking, unforgettable week with Meryl.

"Yes, of course. Maybe I could braid your hair next Tuesday?"