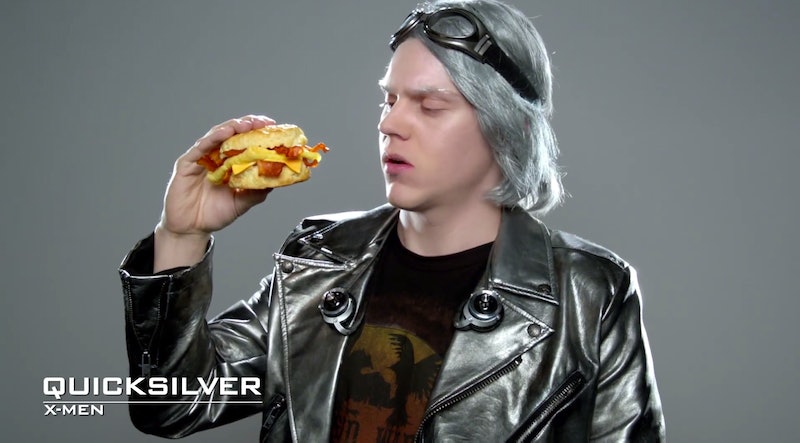 There are some really good advertisement campaigns and there are some really bad advertisement campaigns. Captain America: The Winter Soldier teamed up with Chevy to make quite possibly the most adorable commercial in the history forever, featuring children acting out select scenes from the movie. X-Men: Days of Future Past went in another direction with a Hardee's commercial featuring Evan Peters as Quicksilver eating a bacon burger really quickly. I'm not really in a position to judge, since something that simple apparently raked in about 20 million in marketing dollars, but I'm judging just a little bit. Captain America introduced a Quicksilver of their own played by Aaron Johnson in one of the bonus scenes at the end of the movie and it's already so hard to take either of them seriously with that hair. Commercials like this one just make that worse.

X-Men makes a pretty good case for mutant powers not being all they're cracked up to be. Cyclops can't see the world without his special sunglasses or he's going to destroy everything in his path with his eye beams. Rogue can't touch people unless she wants to drain their life force and kill them. Nightcrawler is a blue demon-looking thing. And no matter how normal you seem, the rest of the world is going to fear and hate and hunt you the second they discover how normal you're not.

But the bright side of the Hardee's commercial is that it reminds us of something that the movies skip — mutant powers aren't always about life and death and saving the world. Sometimes, you can just use your super speed to steal a drink to go with your burger. I can think of three other mutants who could be using their powers for more mundane tasks.

Cooking. He's got a bunch of retractable knives embedded in his skin. Imagine what a great chef he would be. No one can dice an onion quite like Wolverine. All he has to do is make sure to clean them in between meals.

Modeling. She can make herself look like anyone or anything, so does she even need to go shopping for clothes? All a designer has to do is sew the outfit and put it on a model and Mystique could rock it better than them in a second. They'd only ever need one model.

Poker. Actually, just gambling in general. When you're one of the most powerful psychics in the world, there's no real need to leave that much to chance. He could go to Vegas and clean up if he wanted to.