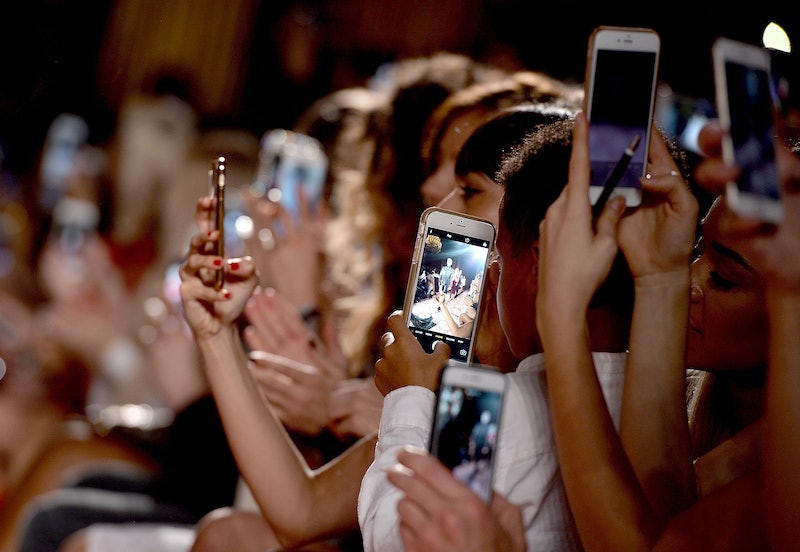 It's likely the first thing you reach for when you wake up, and the last thing you look at before bed: your phone. Perpetually glued to our fingertips, our phones always manage to bring a couple of their friends along, too. (You may know them as Facebook, Instagram, and Twitter.) It may seem harmless, but those hours spent double-tapping and texting can actually change your brain.

As technology continues to develop, our brains are having to adjust to these new technologies. Our method of absorbing information is changing, our memories are being impacted, and even the way we read is being altered.

As Michael Y. Simon, a psychotherapist based in Oakland, Calif., tells Bustle, "Technology always changes us, as we change technology." In other words, our everyday Internet activities are more deeply rooted than you'd think. Here's the way our brains are responding to some of our favorite social media.

Your Brain on Texting

Remember Pavlov's dogs? Turns out, we're really just like them. A little history refresher: Russian physiologist Ivan Pavlov was studying digestion in his pups when he noticed the dogs would begin to salivate whenever he entered the room, even if he wasn't bringing food. After a series of learning-association experiments and some treats, he discovered the simple ringing of a bell prompted salvation from the animals.

Experts explain the triggering of our brain's dopamine system by unexpected actions or the buildup of anticipation — i.e. those heart-stopping moments when you're waiting for someone to text you back. Dopamine, once referred to as "the Kim Kardashian of neurotransmitters" for its popularity, is linked to reward-motivated behaviors and addiction. The pings and rings from your smartphone serve as "reward cues;" essentially training us to expect a little bit of information in the form of a text or notification every time we hear it.

Or, to put it more bluntly, receiving a text message lights up the same area of the brain as taking heroin or cocaine.

Your Brain on Autocorrect

Aside from the hilarious face-palm moments autocorrect brings, it turns out the function can also impair your reading and writing ability. Yes, research from the University of Calgary found that texting can have a negative impact on people's linguistic ability to interpret and accept words.

Frequent texters were less able to able to understand new words, and were less willing to accept them, compared to people who read 'traditional' printed language such as books and newspapers. The study also found that the average number of actual words used by texters is more limited.

Your Brain on Status Updates

We've all had those pensive moments when you're trying to think of that perfect caption. Turns out, one part of your brain is actually responsible for deciding what goes viral on social media. The Temporo-Parietal Junction, or TPJ, is activated when we think about sharing something, and who we'll share it with.

A study from UCLA published in the journal Psychological Science placed students in MRI machines and tested their process of sharing pitch ideas from "pilots" they watched. The success of their pitches correlated with the activity of the brain's TPJ, which is known to help us connect to the thoughts and beliefs of others.

So if you're good at social media, you can thank your TPJ.

Your Brain on Google

What were encyclopedias again? Many millennials may find it difficult to recall the pre-Google era, but having all the answers at our fingertips can have its consequences — at least when it comes to our memory. Instead of recalling the name of an actor after watching a movie or debating specific stats of a baseball player, the conversation is put to an end with a simple Google search.

But one study suggests that constant Googling doesn't mean we're necessarily losing our ability to remember, but rather that the search engine is changing how we remember things.

People may now have enhanced recall when it comes to remembering where they can find information, as opposed to the data itself. So when someone asks you a question about a specific historical event, maybe you don't remember the exact dates, but you might be better at coming up with keywords to search for it.

That said, not using Google may also make a positive difference, according to a 2008 UCLA study. In a group of subjects between the ages 55 and 76, experienced Internet users showed increased brain activity, complex reasoning, and more advanced decision-making skills.

If there's anything social media has proven, it's that people love talking about themselves. And science would agree — some studies show that our brain considers self-disclosure to be a rewarding experience.

Too much information? Not on the Internet: upwards of 80 percent of posts to social media sites like Twitter are announcements about people's "own immediate experiences." (We're betting the rest are cat pics.)

In one study, researchers connected subjects to an MRI machine and watched their brain activity while answering questions about their own opinions and the opinions of others. The brain regions associated with reward, the nuclear accumbens and the ventral tegmental area, became strongly engaged when people talked about themselves, and less-so when talking about others.

Proving that people are even more self-centered that we thought, the participants actually turned down money (just a few cents) to talk about someone else — just so they could continue blathering on about me, myself, and I.

It's no wonder people use Twitter to tell the world about their every inner dialogue.

A study from The Journal of Neuroscience found the reward center is stimulated by the photos, and can even cause women to overeat. (Men, presumably, are simply too busy not torturing themselves.)

So even after you've chowed down, seeing a picture of food can increase levels of the hunger hormone ghrelin. And the problem is?...

Some say Facebook is a rewarding experience, while others highlight the negative emotions it can bring. One neurologist says people may be driven to use Facebook by a desire to monitor their reputation, again linking technology to a person's self-affirmation and the brain's reward system.

“You post something and then you wait for a positive social feedback in the form of likes and comment,” neurologist Dar Meshi told the Los Angeles Times. “And if you get likes, it demonstrates that people think highly of you, which is equivalent to reputation.”

On the flip-side, Facebook can also prompt envy. All your friends seem to be doing so much better than you, and it can trigger feelings of loneliness and dissatisfaction, as many an alarmist study on Facebook depression has informed us.

Facebook statuses also tend to be more memorable to us than some lines from a book or even a strangers face. (Sad, but true.) Our brains are more likely to recall patterns of speech akin to our own thought process, so unedited, naturally-worded posts that reflect our speech tend to stick.

Any of this freak you out?

Our brains are sure to continue to change with social media, but everything in moderation. Simon advises that the solution isn't to "opt out" of the digital world, but rather to take some time to unplug for a while and experience the real world.

"The idea seems quaint, but even dividing up the hour of the day into some segments — for example, 45 minutes in which you work online, text, or interact with a digital device, and 15 minutes of closing your eyes, walking outside, or making eye contact with another — can help mitigate some of the stress of constant interaction with digital media," Simon says. "...Amazing, but humans seem to have limits on bandwidth."