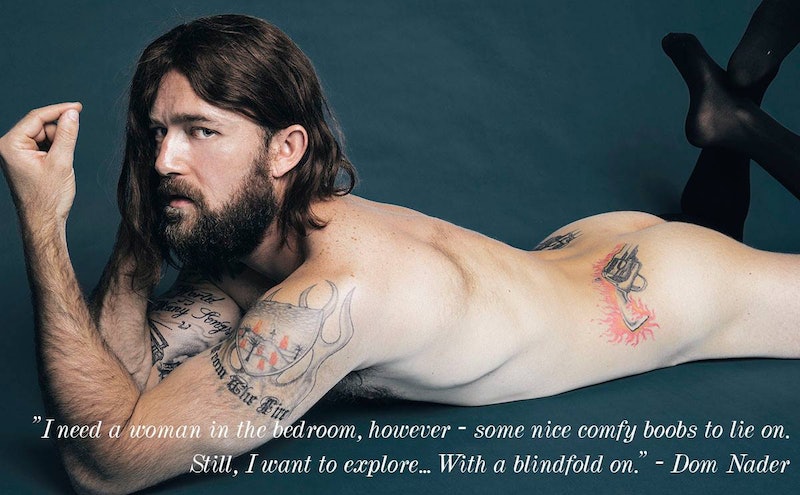 Gender flipping has become all the rage these days; it’s probably not too surprising, then, that Miranda Kerr’s British GQ shoot is the latest target. Australian comedians Dom Nader and Adrian Archer, known as the Bondi Hipsters, reimagined the super sexy shoot in a way that's both hilarious and thought provoking. Nader assumes the same poses and outfits (if you can call them that) as Kerr, appearing in all his manly glory wearing revealing tank tops and thigh-high stockings.

Nader told The Huffington Post UK that the photos were meant to emphasize "the over-sexualisation of the female body in the high-fashion world. For some reason, as soon as you put a man in there … it's an entirely different thing that we aren't used to seeing."

But while the Bondi Hipster’s project draws specific attention to the issue as it pertains to the fashion industry, the really weird thing is that it’s a problem everywhere — including in some places you’d hope it wouldn’t be. It’s become standard in the music world, which is why Robin Thicke's “Blurred Lines” gave rise to a boatload of gender flipped parodies over the summer, including this one from Mod Carousel:

It happens in the news, as illustrated by the Tumblr Flip the News; a recent entry, for instance, took an article focused on what Malia Obama has been wearing during the First Family’s week-long trip to China:

“He’s the First Son … of fashion. Martin Obama is stealing the spotlight from his stylish dad on the family’s weeklong trip to China.

“Michelle and Barack’s 15-year-old little boy turned heads at a Friday photo-op with Chinese President Peng Liyuan and her own first gentleman, Xi Jinping when he donned a classy white shirt and striped tie from Brooks Brothers.

“‘He’s the true star of the foreign photo op,’ gushed US Weekly.”

And it’s even a problem in publishing, specifically with regards to book covers. Last spring, author Maureen Johnson noted in response to the number of men telling her they wished the covers of her books weren’t so feminine:

“A man and a woman can write books about the same subject matter, at the same level of quality, and that woman is simply more likely to get the soft-sell cover with the warm glow and the feeling of smooth jazz blowing off of it. This idea that there are ‘girl books’ and ‘boy books’… gives credit to absolutely no one, especially not the boys who will happily read stories by women, about women.”

Accordingly, she challenged people to take the covers of well-known books and imagine what they might look like if the author was the opposite gender. Does the cover on the right make you want to read Game of Thrones?

And this is just a small selection of places in which the problem persists. You’d think that we’d be sick of seeing all of these gender flipped projects, but there’s a reason they’ve become so prevalent — and why they’ll continue to be relevant for a good long while. The bottom line is that, until a massive and fundamental change occurs in how we think about gender, gender flipping will continue to be one of the most important memes of our time. Take, for instance, one of the most horrifying comments on that The Wolf of Wall Street parody trailer, The Women of Wall Street:

“What a bunch of crap. The fact is women aren’t innovative enough to pull the great stunt that Jordan Belfort did. All they can do is make a shitty imitation trailer that fails at comedy.”

My jaw dropped when I read that — and I do mean actually. I was so stunned, I just sat there with my mouth hanging open for a few seconds afterwards. Until this type of thinking goes away for good, we need gender flipping to keep drawing attention to it.

Here’s what I hope for: The day that gender flipping isn’t news anymore because it is no longer an issue. I honestly don’t know whether I’ll see that in my lifetime; so many of these huge paradigm shifts have taken generations to enact, and indeed, most of them are still ongoing. But it’s comforting to know that the world is starting to speak up about gender disparity — and that they won’t be easily silenced. They’re making a making an incredibly important point, one gut-busting guffaw at a time.

More like this
25 Inspiring Quotes From Black Women To Celebrate Black History Month
By Kyli Rodriguez-Cayro and JR Thorpe
Phoebe Dynevor Serves ‘Bridgerton’ Underboob In Stunning Floral Gown
By El Hunt
24 History-Making Black Women You Probably Didn't Learn About In School
By Ayana Lage and JR Thorpe
15 Black-Owned Liquor & Wine Brands To Add To Your Bar Cart
By Alexis Morillo
Get Even More From Bustle — Sign Up For The Newsletter
From hair trends to relationship advice, our daily newsletter has everything you need to sound like a person who’s on TikTok, even if you aren’t.