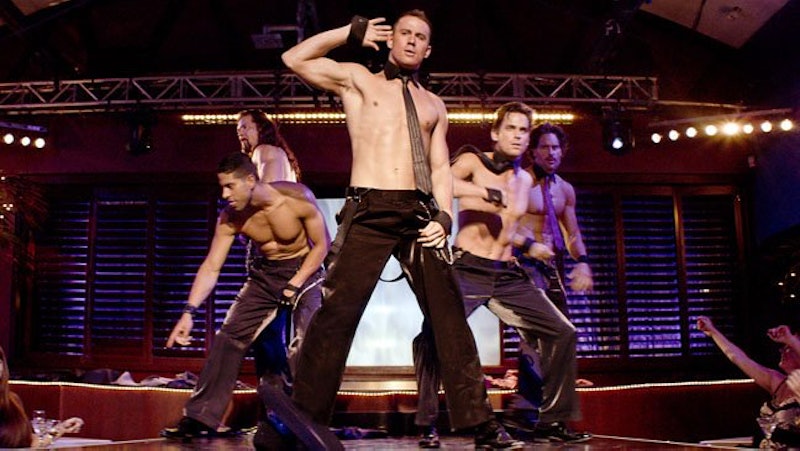 NAKED MEN. Well, I'm not exactly sure what Magic Mike XXL will be about since news of its production was just recently announced, but I'm pretty positive that extremely scantily-clad men will be a big part of the film. And if it's not, you better believe that there will be an outcry from sexually awakened women all across the country who assumed they were about to see Channing Tatum strip for the audience. And if that happens, you just know that the producers over at Warner Bros. are going to lose that battle... and badly.

Now, we don't know too many details about the sequel, save for the fact that Tatum will be co-writing the script with Reid Carolin and that Greg Jacobs is directing, but we can make a handful of educated guesses. Based on the hints that Tatum has dropped, a few of the casting rumors, and my wild imagination (or just my male stripper-inspired dreams), I've come up with some XXL worthy plots:

*Oh, and get ready for the amazing and slightly NSFW gifs that are below because what's an article about Magic Mike without some naked dancing men?

1. The strippers go on a road trip.

Thanks to a 2013 interview with The Hollywood Reporter, Tatum revealed that it might be "a road-trip movie, and it will essentially be the movie that everyone thought the first one was going to be: crazy and fun and less slice-of-life and less drama." While I desperately hope the sequel will be about a bunch of male strippers stuck in a car together for a road trip, this statement was made almost a year ago, and Tatum definitely could have changed his mind. But seriously, how great would it be to see the stripper gang all back together while they enjoy the freedom of the open road?

2. Actually giving us a satisfying ending to the first movie.

So Magic Mike totally had more drama in it than was was expected, but since the relationship between Mike (Tatum) and Adam (Alex Pettyfer) was so clearly important, it would be nice if we could get a little bit more of resolution to their falling out.

3. Two hours of the cast just performing their stripping routines.

I'd definitely pay whatever obscene price movie theaters are charging for a ticket to see beautiful men dance on stage.

I've changed my mind. I think it should just be two hours of McConaughey — excuse me, Mr. Oscar Winner McConaughey — dancing on a stage for two hours.

5. The gang has nothing to wear.

Since the movie is titled Magic Mike XXL, maybe Tatum is thinking of taking a literal route to the plot. Just picture it: The state of Florida runs out of skimpy stripper clothing and the gang goes on a hunt to find their thongs and speedos. Hey, it could happen.

Now, ask me again what the plot will be if a third installment titled Magic Mike XXXL ever comes out because I can promise you my theories will be a whole lot dirtier. Like really dirty.