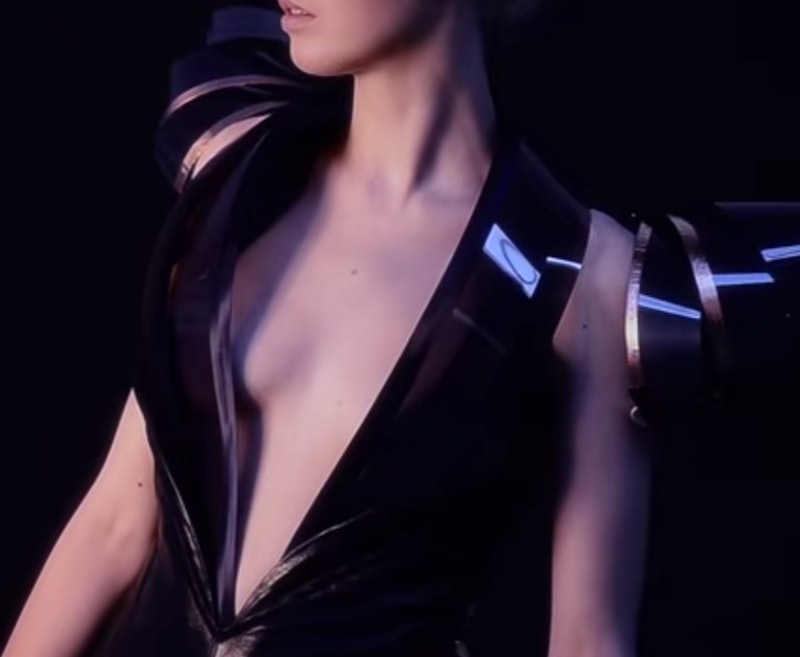 Ah, technology. Always trying to get in our pants — or dresses, in this case. Because apparently that bra that only comes off when you're in love wasn't enough, the world has now gifted us with a haute couture dress that becomes see through when it detects that the wearer is aroused.

The dress comes from the INTIMACY 2.0 project, which belongs to Studio Roosegaard in the Netherlands. It features tiny sensors that monitor things like body temperature and heart rate and can thus determine when you're turned on — and use that as an opportunity to make the dress' opaque e-foils grow more and more sheer until they are completely transparent. And it seems that though e-foils don't make up the entire dress, they are the material that goes over the breasts. Because I guess what else would be the point.

It's worth pointing out that there's still no way for sensors to determine the actual reason your heart rate and body temperature are going up — we have not yet developed psychic sensors — so really this is a dress that goes transparent when you are excited (sexually or otherwise), nervous, or really freaked out.

The dress comes in either white or black styles, and is fairly revealing even before it goes see-though.

It's actually kind of a cool dress, and is apparently only the first of presumably several designs INTIMACY 2.0 would like to create. So far, it's been exhibited in several countries, but it does not seem to be available for purchase yet. If it ever does hit the market, though, I can't imagine it would be cheap.

And though I seriously doubt I would ever wear such a thing in public, it is kind of fascinating to watch it turn transparent. Though does this mean the models are getting turned on while the filming is going on?