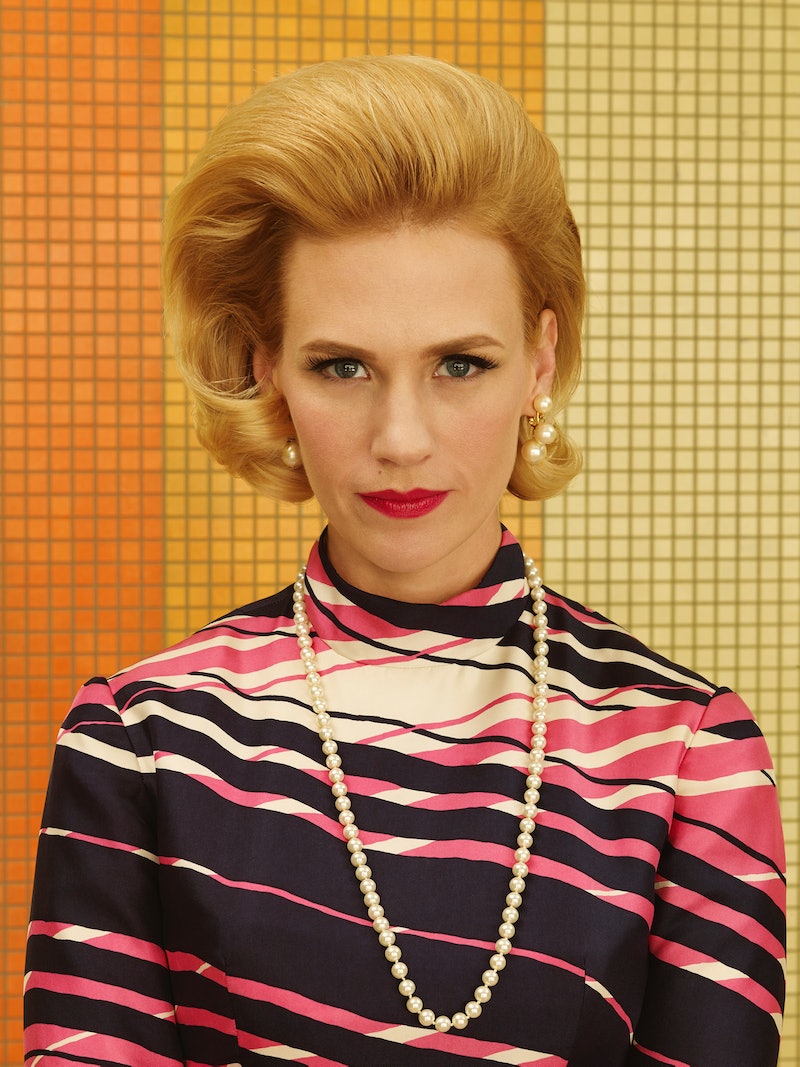 The final season of AMC's flagship show Mad Men starts Sunday, April 13 — or the first half of it does, anyway, since AMC decided to split the final season in half between spring 2014 and spring 2015. While it's worth asking whether Don will get his mojo back, or how successful Peggy will become, we're also wondering about our favorite blonde. What will Betty Francis, formerly Draper, née Hofstadt, be up to this season?

First, let's quickly remind ourselves where we left her. Season 6 saw Betty (January Jones) recover from her Season 5 weight gain, briefly dye her hair brown, hook up with her ex-husband at their son's summer camp, and despair after Sally was suspended from boarding school for underage drinking. Her final scene of the season found her breaking this news to her husband. "The good isn't beating out the bad," she fretted about their daughter.

So what's next for Betty? Here are some predictions of what we think might happen to the show's resident Ice Queen as Mad Men embarks on its final run:

With Henry leaving his public relations job and running for State Senator, Betty will soon be thrust into the public eye — and it very well may turn out that the campaign trail is the place Betty was born to be. With her former career in modeling and years of maintaining an unflappable facade, she'll be the perfect wife to stand by Henry's side as he stumps for votes. And if he gets elected, well... is it really much of a stretch to imagine that Betty would quickly become as conniving as Frank Underwood's chilly, blonde wife? Once she gets a taste of power, something she's been denied her whole life, she'll never want to let it go.

Betty and Don continue their affair

Betty and Henry seem as happy as they've ever been, but it's hard to forget about that steamy hookup she had with Don in the cabin last season — and it'll probably be hard for Betty to forget about it, too. With Don's marriage to Megan on the rocks and Betty's relationship with Sally getting progressively worse, it's very easy to imagine they'll find solace in each other's arms. These are two profoundly miserable people, and we all know that misery loves company.

I know, I know — like there aren't enough kids running around that house already. But with Henry raising three kids that aren't his, it would be understandable for him to want Betty to bear one of his own. And if she gets pregnant while in the middle of an affair with Don, it'll incite some delicious drama about who the child's father really is.

Henry is assassinated and Betty becomes a Senator

Okay, bear with me here. I know this sounds preposterous, but remember back to the fifth episode of last season, "The Flood," when Martin Luther King, Jr. was shot and Henry made the decision to run for office. The hour ended with Don tucking his son Bobby into bed. Bobby, shaken by the day's tumultuous events, asks his father, "What if somebody shoots Henry?" Don tells him that won't happen because Henry's not important. But what if Henry becomes important? Could this innocent question actually have been major foreshadowing? Imagine that Henry is offed by an assassin. Is it inconceivable that his beautiful and respected wife with a newfound taste for power could claim his seat in the State Senate? Okay, maybe it is, but just imagine what an unexpected development that would be for the former bird-killing housewife.

Mad Men isn't known for offing major characters every week like its AMC sibling, but it has had its fair share of grisly shocks. (See: The lawnmower and Lane's suicide.) Overly analytical viewers came to the conclusion last season that Megan was going to die because she wore a shirt that Sharon Tate, famous victim of the Mason Family, also wore. Mad Men creator Matthew Weiner has since debunked that theory, but what if the viewers were just wrong about which of Don's wives was going to kick the bucket? In many ways, Betty is Don's last link to his troubled past (especially since Anna died back in Season 4), and it may be that her death is essential for the final stage of Don's evolution.

Or maybe not. We'll see which of these predictions, if any, come true starting this Sunday at 10 PM ET. In the meantime, whet your appetite with this ultra-stylish teaser.