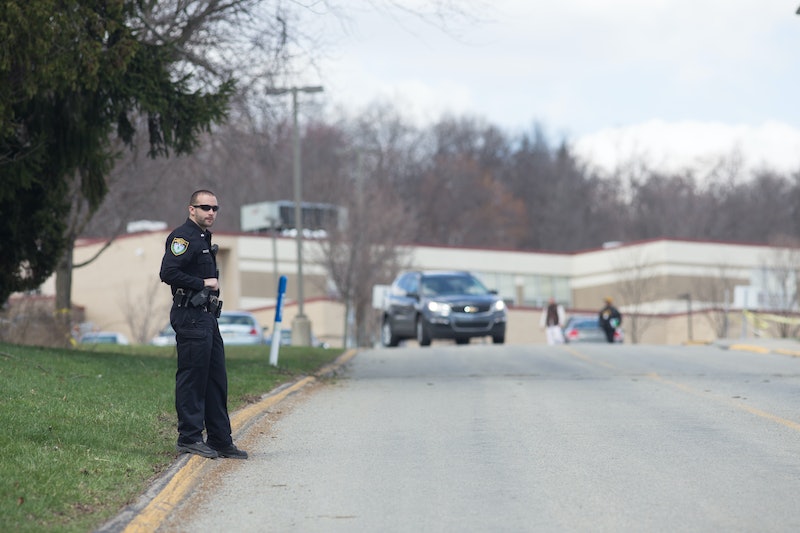 The teen who went on a stabbing rampage today at a Pennsylvania high school has been identified and will be charged as an adult, authorities say. The teen, identified as 16-year-old Alex Hribal by court documents obtained by CNN, will face four counts of attempted homicide and 21 counts of aggravated assault. In five minutes, he allegedly injured at least 22 people at Franklin Regional High School in Murrysville, Pa., with two kitchen knives. Hribal is being held in a juvenile detention center.

One adult and 21 students were stabbed, leaving two critically injured. A security guard was stabbed in the stomach, according to ABC News. One 17-year-old suffered a stab wound that narrowly missed his aorta.

The attacks began around 7 a.m. in various classrooms and hallways, Westmoreland County Emergency Management spokesman Dan Stevens said. Hribal was stopped after being tackled by the school's assistant principal, Sam King, and handcuffed by police.

Some of the wounded students didn't even realize they had been stabbed, said Dr. Timothy VanFleet, chief of emergency medicine at the University of Pittsburgh Medical Center.

"Almost all of them said they didn't see anyone coming at them. It apparently was a crowded hallway and they were going about their business, and then just felt pain and started bleeding."

Murrysville Police rushed to the 3,700-student school at about 7:13 a.m., where they found a tumultuous scene, Chief Thomas Seefeld said.

"When we got there we saw a hallway in chaos, as you can imagine," Seefeld said. "There was a lot of evidence of blood on the floors and in the hallway, we had students running about, trying to get out of the area."

Authorities are investigating a motive for Hribal, who reportedly had a "blank expression" during the attack.

Students on social media cite student Nate Scimio, who posted an Instagram photo of himself with a bandaged arm, as the person to pull a fire alarm.