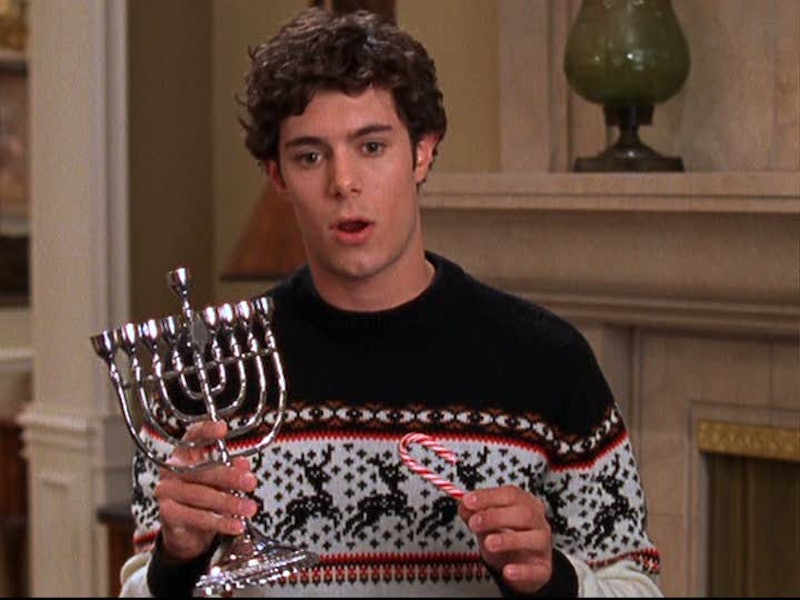 I'm not a deeply religious person (I know, George Michael, I gotta have faith, faith, faith). I was, however, raised in mixed-faith household. I grew up with one Catholic and one Jewish parent, which I lovingly refer to as being a "Cashew." To be Bat Mitzvah-ed or to be Confirmed: that is the question! Children of Catholic and Jewish parents may think we have plenty to kvetch about, but as it turns out, there are actually lots of us who celebrated Chrismukkah before The O.C. made it a pop culture phenomenon — it even turns out Indiana Jones himself, Harrison Ford, is also in the Cashew fold.

My own personal blend of Cashew-ism is one part Catholic mom and one part Jewish dad. Mix together with a dash of Yiddish and a fuzzy knowledge of the Old and New Testaments and there you have it: I’ve got the sunburn-prone skin of the English Catholic heritage, and the full-blown Jew-fro of my dad’s side of the family. Lucky me!

The flavorful life of Cashews is one filled with as many loud family gatherings as it is with guilt. My fellow Cashews, you are not alone! But there are some things only we can understand. Things like...

One religion makes you feel guilty about everything in the afterlife...

...and the other just makes you feel guilty all of the time

You guess which is which.

During Winter, your mantlepiece is decorated with both nativity scenes and menorahs

You also probably have a christmas ornament in the shape of a dreidel.

and sorry, but it is an undeniable fact that Christmas is better

Not even Purim's costumes and hamentaschen can compare.

If you were from a town without many jews, you became the representative for all things jewish

Get ready to explain Passover in front of your classroom K-12, y’all.

If you went to CCD, you probably dropped out after Confirmation

You've consumed both the blood of Christ and post-service Manischewitz...

and you know that in the flavorless food world, Matzoh reigns over "The Body of Christ" wafers

You know the difference between gelt and guilt

And your entire life is plagued with A LOT of it. Have I mentioned the guilt thing?

You cling to your Jewish identity, mostly for the humor

You watched The Ten Commandments A LOT as a kid

spring means both this

Fasting on Yom Kippur? Giving up something for Lent?

THE HANGER IS TOO REAL.

You know the two different ways to say "Amen"

The difference between your extended family gatherings is night and day

Unless you’re Italian, then it’s essentially the same.

This travesty would ONLY happen on the Catholic side of the family.

...And when there isn’t a chocolate egg cake after Passover seder

It doesn't JUST depend on what religion your mother is.

but you're proud of your family

Cultural identity people, GET WITH IT.