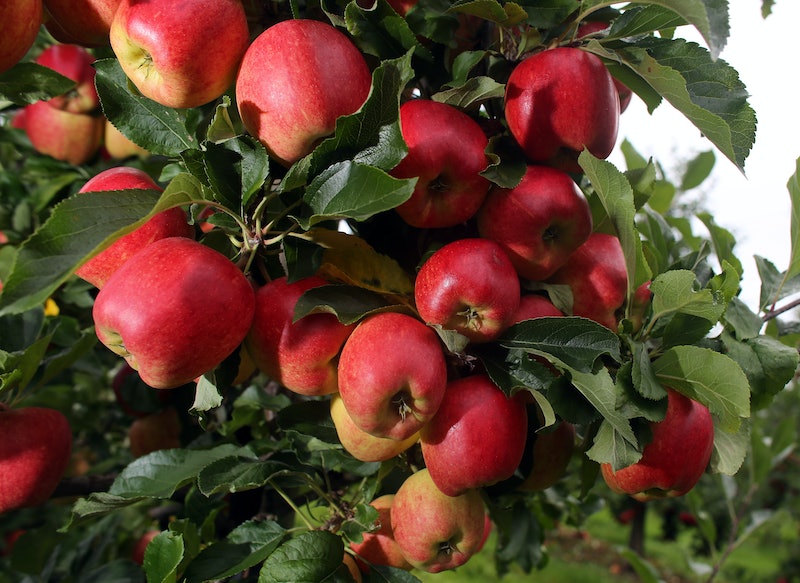 Happy Earth Day! Now, are you sitting down? Because we should make one thing extremely clear: climate change is real, it's happening now, and it's going to completely change the way we live our lives. According to a recent IPCC report, we can expect rising sea levels (which could displace 13 percent of the world's urban population) as well as changing ecosystems, which will be hugely impacted by rising temperatures. But a new aspect of the IPCC report is its focus — an entire chapter — on how climate change will impact our food systems.

"All aspects of food security are potentially affected by climate change, including food access, utilization, and price stability," the report said, noting that we could see significant decreases in crop yields as soon as 2030.

Having 13 percent of the world displaced due to rising waters is scary — but 13 percent doesn't affect everyone. But everyone eats, and everyone will be impacted by climate change's effect on agriculture.

Here's a look at how what we eat might change if we don't take serious steps to mitigate climate change.

Red Meat Will Be More Expensive

When you think of the driving forces of climate change, it's easy to think of industries like oil and coal being singularly responsible. But what a lot of people don't realize is the incredible impact large-scale agriculture has on our climate: from production to shipping, agriculture accounts for one-third of greenhouse gas production, and the meat industry is a huge subset of that. Livestock release large amounts of methane, a potent greenhouse gas, and if current standards are not curbed, amount of methane from livestock could double by 2070. That would make meeting the UN climate target (of not warming more than 2° Celsius) impossible.

By 2050, it's estimated that emissions from lamb and beef will account for half of all agricultural greenhouse emissions — while only providing three percent of the world's calorie intake. According to researchers in Sweden, sweeping dietary changes will be hard to enact, and won't work fast enough: to curb emissions, we're going to have to put some kind of tax on livestock production.

Apples Will Be Scarce — And Taste Different

Honeybees are dying in huge numbers. Last winter alone, United States commercial beekeepers lost almost one-third of their bee colonies. Elsewhere, honeybees are undergoing a similar collapse. No one knows exactly why the bees are dying, but several factors — including loss of habitat and climate change — are probably contributing.

This is a serious issue, because as the UN has estimated, 71 of the 100 crops that provide over 90 percent of the world's food are pollinated by bees. And it's not just honeybees that are in trouble: recent reports also point to population losses for wild bees, like bumblebees, which are crucial for pollinating crops like apples. Lose bees, and you lose a lot of really important food.

Even if bee populations stabilize, climate change could permanently alter the crisp bite of your favorite apple. In a report published in August, Japanese scientists claim that early flowering and higher temperatures have altered the taste of the Fuji apple, making apples mealier and less flavorful.

You'll Have to Give Up Clam Chowder

The IPCC report warns that we're heading for some serious problems when it comes to our marine-based sustenance. As human population increases, demand for cheap food (fish) has been steadily rising; a trend that the report sees continuing over the next 20 to 30 years. In order to maintain the current level of fish consumption for the world's growing population, between 71 and 117 million tons of fish will need to be produced through aqua-farming.

But as climate change decreases weather stability and increases extreme weather events (especially in low-lying areas where fishing is most prevalent) it will be difficult to sustain current fishing and aquaculture practices. Compound this with rising ocean temperatures, and we will continue to cause fishes' migratory patterns to change. This means that fisherman in New Jersey won't find many cold-water creatures, like clams or mackerel, as easily as they once did.

It'll Be Harder To Get Your Morning Cup of Coffee

Now here's something we can all freak out about. Rising global temperatures are going to be bad news for the world's coffee growers, who are already seeing their crops damaged by too-warm temps.

The IPCC report warns that warming temperatures could ruin 40 percent of coffee crops in Costa Rica, Nicaragua, and El Salvador. In Brazil, the world's biggest coffee producer, a 3° Celsius increase in temperature would render two-thirds of the land in its most important growing states unsuitable for coffee.

And it's not just crop volumes that would be in trouble — coffee's quality would decrease, too. Higher temperatures increase the coffee plant's metabolism, harming the volatile compounds that give coffee its distinct aroma. That means your beloved half-caf-skinny-macchiato might start tasting worse than the look the barista gives you for ordering it.

Food Will Be Less Nutritious

As if losing your red meat, fruits and veggies, coffee, and fish wasn't bad enough, whatever crops manage to adapt to warming temperatures will be less nutritious than their pre-climate change counterparts.

In a field test published online in Nature Climate Change, researchers at the University of California, Davis found that wheat grown in the presence of a lot of carbon dioxide failed to assimilate their nitrates into proteins effectively, resulting in lower-quality grains. Plants use nitrates for their growth and productivity, but they're equally crucial to humans, as plants convert nitrates into proteins that are important for human nutrition.

According to the Food and Agriculture Organization of the UN, wheat is "grown on more land area than any other commercial crop and continues to be the most important food grain source for humans." So it would seem to be unsettling that one of the most (if not the most) important staple crop in the world will take a nutritional hit due to climate change.

Unfortunately, this is in no way an exhaustive list — there are many more areas threatened, including craft beers, wine production, and even chocolate.

The only good news here* is that farmers and people directly involved with agriculture have been seeing the warning signs for years, and are becoming more actively concerned with the impact of climate change on their profession. But this isn't just a problem for farmers or fishermen: if we don't take drastic measures to improve our agricultural technology, curb our carbon emissions, and maybe even alter our diets, everyone's way of eating will change completely — whether we choose it or not.

*There are so many horrible things happening in the world that it’s easy to feel helpless and incapable of affecting social change. But sometimes, small actions can make a big difference. We’ve written a series of guides to help you know where to start — today. Today’s guide: Five easy things you can do to help fight global warming.