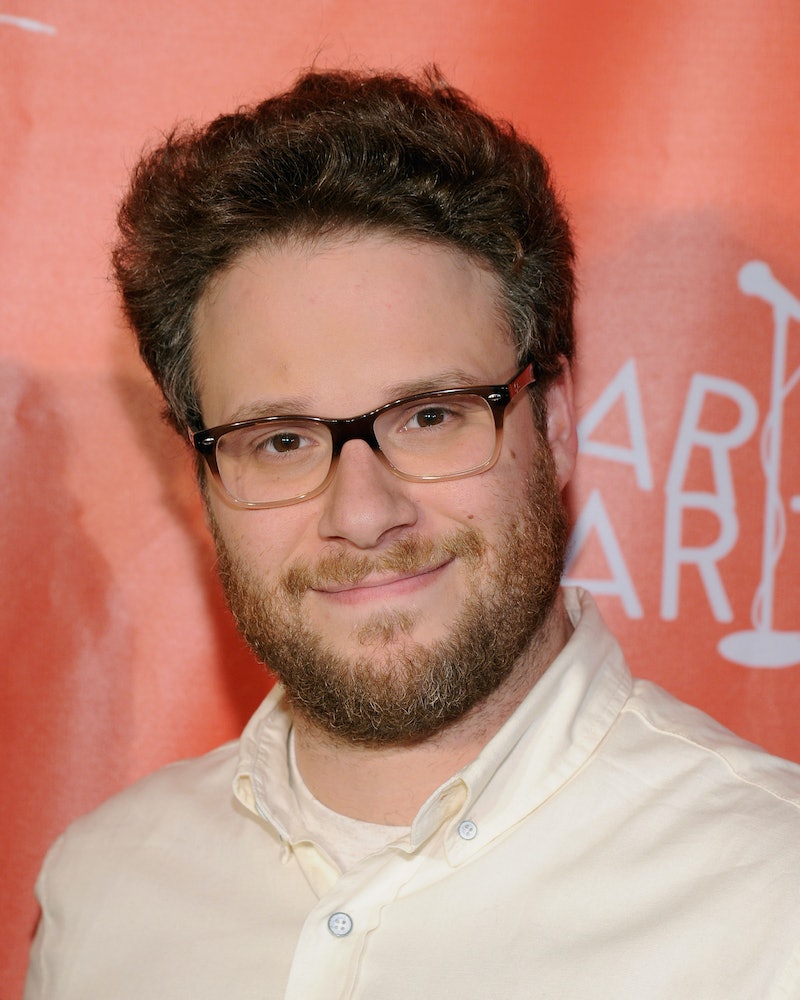 Cue that Muppet-like chuckle: Seth Rogen will host Saturday Night Live tonight for the third time in his career. This time around, the actor (who turns 32 next week) will be promoting his raunchy new comedy Neighbors on SNL. And while most of the talk surrounding the upcoming flick has revolved around his co-star Zac Efron, Zac Efron's abs, Zac Efron's arms, and Zac Efron's dreamy eyes (even Rogen can't deny that Efron is the "sexiest motherf---er alive"), there's no shame in admitting your real crush is actually on Seth.

If you're like most Rogen fans, the crush started back in 1999 when he played the ultimately sweet stoner Ken Miller on the cult darling Freaks and Geeks. But if you caught on to Rogen's ultimately sweet stoner schtick a little bit late in the game, it's probably thanks to one of his movie roles. (Or, you know, his generally awesome demeanor... or that he seems like an attainable, fun guy... or the fact that he delivered a wonderful, heartfelt, funny, personal, and important speech he delivered to Senate regarding Alzheimer's research. What a dreamboat.)

Sure, he's achieved stardom thanks to roles in uproarious hit comedies like Pineapple Express, This is the End, and Superbad, but he's been able to tickle your funny bone and your fancy in some of his other flicks. Here are five movies that solidify and justify your crush on one Mr. Seth Rogen.

This was the one that really kick-started Rogen into superstardom, and with good reason. As Ben Stone, the schlubby stoner whose slacker lifestyle is turned upside down when he gets a woman (played by Katherine Heigl) pregnant after a one night stand, Rogen was particularly charming when he made his transformation from man-child to a man-capable-of-raising-a-child. Plus, his Las Vegas trip gone awry with Paul Rudd was enough to give anyone a case of the giggles and the swoons.

Rogen's best performance to date was as Kyle in the cancer dramedy 50/50. While Rogen played the sidekick once again (this time to Joseph Gordon-Levitt's cancer-stricken Adam), it was a different kind of best bud role. Sure, Kyle's plan to "help" Adam when he was fighting cancer was to go out and get him laid, he was always there when he needed him, whether it was taking him to appointments or helping him through a breakup. Kyle may have been loud and annoying at times, but his heart was always in the right place. What's not to love?

If any movie or performance could give 50/50 a run for its money as the best, it's this one. In Sarah Polley's absorbing, sexy, and heartbreaking drama Take This Waltz, Rogen played Lou, the sweet husband to Michelle Williams' Margot, a woman who finds herself in the middle of a life-changing affair. Rogen's character is not only forgiving, friendly, and loving in spite of everything that unfolds, but he's a master-class cook. The other man (played by Luke Kirby) is cute and all, but when you watch Rogen you'll wonder why Williams wanted to stray in the first place.

Truth be told, The Guilt Trip isn't a very good movie, but watching Rogen play the son of an overbearing Barbra Streisand solidified his place as the "mensch" of our hearts. A guy who is good to his mother is instant-crush status.