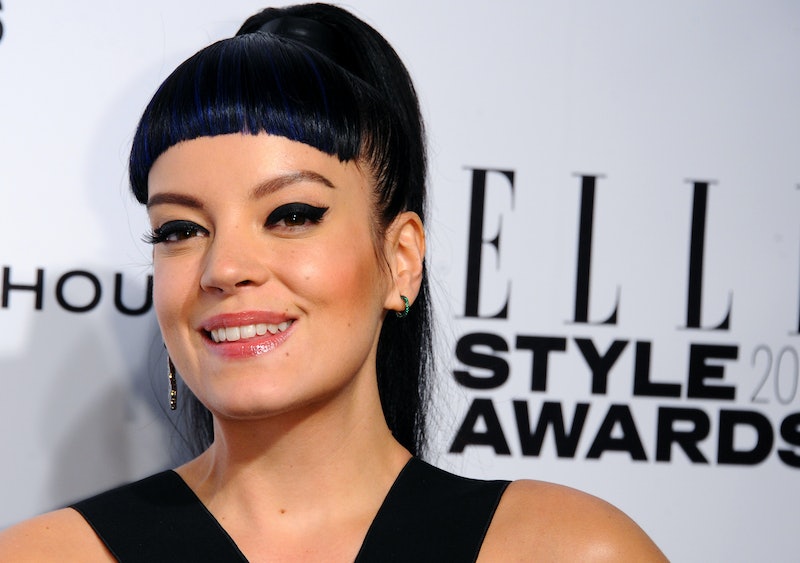 Last I heard of Lily Allen, it was in one of about a trillion think-pieces dissecting the not-so-subtle racist overtones of the video for her attempted feminist treatise of a single (then, wait, apparently she says it isn't) "Hard Out Here": the use of black women's bodies as props, lines that sloppily lampoon hip hop more than they do the patriarchy — all in all, a pretty solid #SolidarityIsForWhiteWomen moment all around. (Honestly, just read the think-pieces.) Of course, that was just one song out of 14 on her forthcoming album, Sheezus , which drops on May 6, and if early reports are any indication, there's plenty more to fret over where that came from.

With the release date drawing ever closer, Allen spoke to Rolling Stone about the implications of that title and its accompanying title track — her insistence, for example, that she cleared it all with Kanye West, and he gave the go-ahead. More importantly, though, she makes sure to get out in front of lyrics on the song that might appear to diss Lady Gaga, Rihanna, and Katy Perry by insisting, "It's completely the opposite of that, though. I'm saying that I want all of them to be Sheezus, and I want to be Sheezus too." Given her recent history with conveying a straightforward message, I'm going to guess this disclaimer was more than necessary — and given her recent history with women's issues, assuming "Sheezus" is some kind of lady-messiah, a knee-jerk reaction to that desire might be to pfft and roll one's eyes before mic-dropping and shouting "IN YOUR DREAMS" over one's shoulder. That is, until a few lines later, when she dropped the following gem on the interviewer:

"It feels like the reason we play women against each other is because it's the last bit of power that men have. They're like, 'Let's make them feel shit about each other.'"

Which, at this point, is just frustrating.

Don't get me wrong — anytime any public figure says something righteous about women, they deserve a big high five and some ice cream. But when someone with so relentless a track record of stumbling from cheer-worthy to cringe-worthy tries to pick up the gauntlet once more, I start to feel like that crotchety Liverpudlian vulture from The Jungle Book : "Now, don't start that again!" Which is perhaps hasty, sure. I mean, even "Hard Out Here" had a few great moments — the sight gag of "Blurred Lines"-style balloons spelling out "LILY ALLEN HAS A BAGGY PUSSY," the coyly delivered lines "Don't you want to have somebody who objectifies you? Have you thought about your butt — who's gonna tear it in two?" But then, when faced with criticism of its not-so-great moments, she turned around and tweeted the following screed:

Unfortunately, I left my bush hat at home today, but let me be far from the first to say that a quick and easy way to perform feminist malpractice is to toss around exactly those kinds of stereotypes. Sigh.

So, while we wait with faces scrunched in pre-cringe anticipation for Sheezus to officially debut, let's all cross our fingers that Allen was having an especially good day when writing tracks like "Silver Spoon," about her perceived privilege, or "URL Badman," about Internet hate. Personally, my money's on the track titled "L8 CMMR," because if the brilliant ode to sexual dissatisfaction "Not Fair" is anything to go by, Allen's at her best when dishing out frank boudoir talk with a cheekily cheery soundtrack — which is, in and of itself, pretty feminist, right? (Now, don't start that again...)