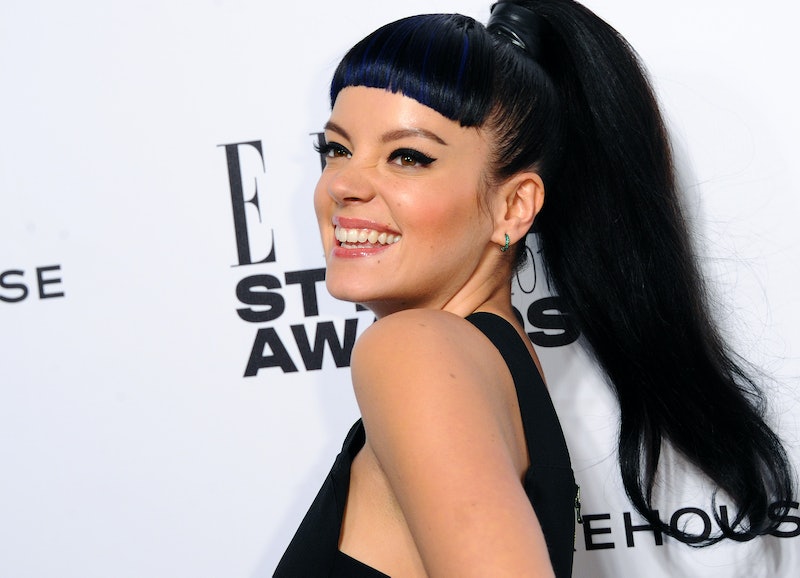 What are we going to do with you, Lily Allen? While the British pop singer is an undeniably talented songstress whose infectious songs are the stuff cynical pop music lovers ache for, Allen insists on constantly getting down in the muck with her critics. And surprise: she's at it again.

The singer spoke about feminism in an interview with ShortList in which she claimed feminism was over and asserted that her controversial video for "Hard Out Here" wasn't actually meant to say anything about women or be a "think-piece." Her statements upset fans and feminists, who took to social media to call her out for her errors. But because Allen is not one to let criticisms of her work or words go, she hopped on Twitter to defend herself against her critics.

"Unless you're standing outside Downing Street with one of those Australian bush hats with dirty tampons in place of corks shouting 'equal rights for men and women', you've got no place telling me what kind of feminist I am or am not. Fuck off," she tweeted via photo. She then began retweeting folks who agreed with her and who insist that journalists have quoted her out of context. Naturally, with all this hubbub, it's only fair that we take a look at Allen's quotes and see if we're all just too ready to fight the singer since potentially racist elements of "Hard Out Here" were exposed or if Allen is really spouting some problematic opinions.

Well, that was rather indignant. For reference, an Australian bush hat with corks is the classic Australian outback hat that appears to be a marriage between a cowboy hat and a fishing cap with corks hanging off of it. Now imagine that with gross, used tampons instead of corks and imagine yourself standing outside of 10 Downing Street (if you're not familiar with British politics, think "Hugh Grant's house in Love Actually") yelling at the Prime Minister to create equal rights, across the board, for men and women. Now, if you're not willing to do that, you're not a real feminist and can't criticize other feminists for flawed commentary. Okay, sure.

According to Allen, if you're not a caricature of a 1960s women's lib crusader (bloody tampons, really?), your criticism is invalid. How about "NOPE."

Now For Her Thoughts on Women Fighting Women

While speaking about "Hard Out Here" the interviewer asked Allen if the video was about women being pitted against other women. Her response sort of confirmed that reason with some problematic pieces along the way:

It’s much the same. But I don’t think men are the enemy, I think women are the enemy. I know that when I’m sitting in a restaurant and a really beautiful woman walks in, who’s skinny, I instinctively think, “Oh she’s really skinny and beautiful and I’m really fat and ugly.” Every man I speak to always says they find that kind of woman gross, and they prefer a bit more meat on their ladies. So it’s more of a competitive thing. It’s weird. It’s just really unhealthy and we’re our own worst enemy. We should stop being so horrible to each other.

And later, when speaking about a song which name-checks Katy Perry and Rita Ora, Allen says:

It just dribbled out! It’s not supposed to be provocative and it’s not attacking anyone, although it does namecheck a few people. It’s about how girls are pitted against each other, unlike men. I know you had it in the Nineties with Blur versus Oasis, but it’s not the same thing. It’s like ‘Who looks the best?’, ‘You’re getting too old to do this, you shouldn’t be doing that’. There seems to be a moral undertone when women are concerned that doesn’t happen with men, and that’s what that song is about.

Parts of her statements make a rather good point. Women can often be their own worst enemy, because we're bred to be sexually competitive and yes, it bleeds into our professional lives especially for women in the limelight. It's unhealthy and Allen is right, we should stop being so horrible to each other and often times, it is very different from male competitiveness because it almost always based on sexual triggers. In fact, this statement begs the reference of another pop song, Beyonce's "***Flawless" which features writer and activist Chimamanda Ngozi Adichie's quotes about women competing against each other:

We raise girls to see each other as competitors, not for jobs or for accomplishments, which I think can be a good thing, but for the attention of men. We teach girls that they cannot be sexual beings in the way that boys are.

On that front, Allen's statements are right on. But in the same breath that she calls for us to be kinder to each other, she makes a backhanded jab at women whose body types are different from hers, saying "Every man I speak to always says they find that kind of woman gross, they prefer a bit more meat on their ladies." Look, I've struggled with ultra-thin bodies being the ideal for my entire life. I'm built very similarly to Allen and completely understand the bit about allowing thin frames to make me question my own, but I'm not about to take the pain I feel over not having that body and displace it onto thin women to justify my own body like Allen does here.

She's using someone else's words, so it absolves her of technical guilt, but she didn't have to say that anyone thinks thin women are "gross" and she'd still have been able to get her point across. Including that bit about how her body is preferable to men that she knows brings her shape into sexual competition with the others and declares her the victor. That's the exact definition of the competition that both Allen herself and Adichie speak about, and it makes Allen appear to be a bit of a hypocrite.

Her Take on Feminism Being Over

On the tail end of the Katy Perry question, Allen added this bit about her take on Feminism:

Feminism. I hate that word because it shouldn’t even be a thing any more. We’re all equal, everyone is equal so why is there even a conversation about feminism? What’s the man version of feminism? There isn’t even a word for it. There’s no reason for it. Menanism. Male-ism. It doesn’t exist ... Fast-forward 100 years: “Yes, I do believe men should be treated equally.”

Now, this is the statement that seemed to anger folks greatly, the idea that feminism is simply over. Stick a fork in her, we fixed it, y'all. And while, in the New York City bubble where I live, I've often had a similar thought — the "What else is there left to even fix?" thought — but through education and vigilance it becomes increasingly clear that the work of feminism isn't done.

Allen compares the absurdity of continuing to call the feminism movement a movement to a fake call for equality for men. The problem is that while she's just attempting to make a point, she's treading into the territory of mansplaining complainers who jump to the internet assuming that feminists want to squash and surpass men rather than fight for a balance that still doesn't exist. Again, that's not what Allen is actualy saying, but that's what her words evoke.

Perhaps she is referring to the idea that feminism should be more of a "humanism" movement, but even that doesn't quite hold water. Lindy West at Jezebel brilliantly explains why:

Unfortunately, the reason that "fem" is a part of the word "feminism" is that the world is not, currently, an equal, safe, and just place for women (and other groups as well—in its idealized form, intersectional feminism seeks to correct all those imbalances). To remove the gendered implications of the term is to deny that those imbalances exist, and you can't make problems disappear just by changing "feminism" to "humanism" and declaring the world healed. That won't work.

Then there's the part where the work of feminism isn't done. Just take a look at 15 minutes of Fox News programming and you'll probably find someone saying women shouldn't work because it doesn't leave them time to get married, have babies, and spend lots of time shopping. You could take a gander at Silicon Valley, where women are almost like unicorns or the film industry, where the ladies are just as poorly represented now as they were in 1998. And yes, many powerful and politically important folks have taken stances on women's equality, but for every statement about equal pay from President Obama there's a group of folks who thought Mitt Romney's "binders full of women" was a totally solid, non offensive debate response or a guy who thinks a woman shouldn't be a pilot (or even a woman who agrees). Feminism still exists because its work is not done.

Look, I get that she's trying to say we've come a long way and made a lot of progress, but it certainly comes across as saying that there are no feminist kicking goals left. And as much as I wish that were true, there's simply too much evidence to the contrary. Sorry, Lil.