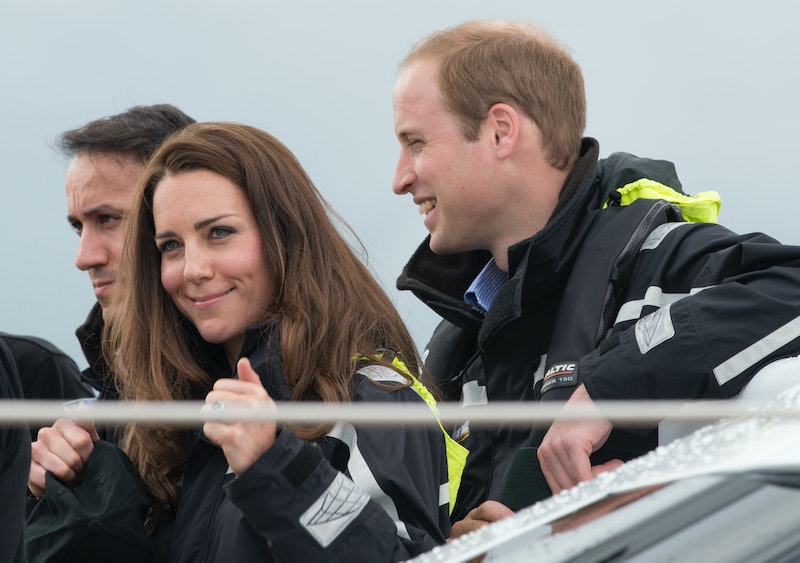 She's queen of the world! Although perhaps Titanic jokes aren't the wisest ones to be making at the moment. Still, as the royal family continues their New Zealand & Australia tour, all the spotlight couldn't remain on Prince George. George might be saving the monarchy with his chubby cheeks and casual disregard for photo op decorum, but Kate Middleton has proven that she can do a lot more than design houses and look really, really good in everything. She can also beat Prince William in a sailing race. Twice.

The pair were racing Emirates Team New Zealand America's Cup yachts around Auckland harbor. "There are no friends on the water. No quarter given," said Emirates Team New Zealand managing director Grant Dalton. And it was true. Prince William may have beaten her in the friendly Dragon Boat race in 2011, but all that did was give Middleton a score to settle. After all, she grew up sailing and spent her gap year on the crew of round-the-world challenge boats.

Middleton was seen punching the air both times her boat sailed past William's into first place and even gave Prince William a cheeky victory salute as she passed, because she knew, as we all do, that her double victory has more or less guaranteed her bragging rights for the rest of their lives.

Prince William was quick to joke that he and his sailing partner "were sabotaged" once they were all back on dry land, which is fair enough. Middleton's reaction to being beaten in the Dragon Boat race was to jokingly attempt to push William into the water. The competitiveness between the two royals is refreshing on many levels, since it's easy to forget that they're both human and not just immaculate heirs to the monarchy. If sailing is all it takes to get Middleton's competitive blood boiling, they should try some other normal activities that she can keep score on.

I'm not saying that I can see Prince William and Kate Middleton getting into a heated argument about who sunk whose Battleship or who has to pay who money because they landed on their Monopoly property... except that that's exactly what I'm saying. There's no quicker way to start a friendly argument than to pit two competitive people against each other in a board game.

It was once rumored that Middleton was allergic to horses, but she attended a horse race with Prince William during her pregnancy and talked about learning to ride them in 2012. By now, her skill level with them has to have increased. That means it's just a matter of time before she challenges William to start saddle up so they can go head-to-head with their best horses.

If Middleton loses to Prince William at the horse racing, then she can challenge him to a swimming competition. It goes hand in hand with sailing, but Middleton has a genuine love for swimming as one of her many hobbies and we're confident that she can swim laps around William. Especially right now while she's still riding high on her confidence from sailing laps around him.