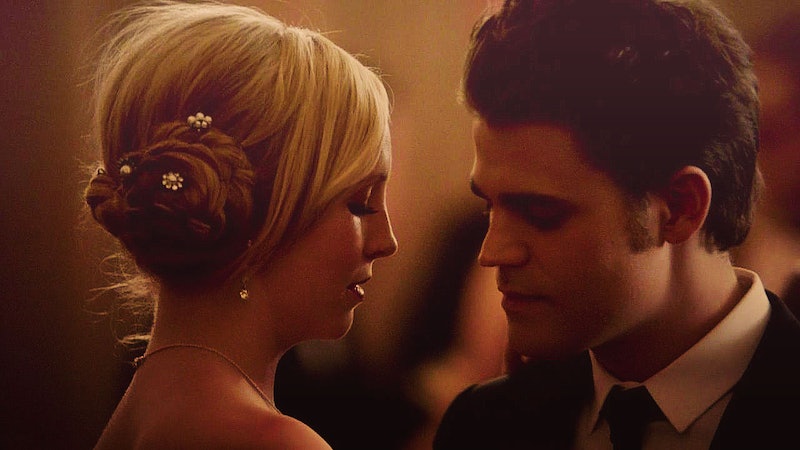 Hello, Vampire Diaries fans. How are you enjoying your mini Vampire Diaries hiatus? I know, I know — it's been hell. Luckily, we were left with a seriously awesome image to tide us over until the next episode airs on April 17. No, I'm not talking about all of the steamy hookups between Damon and Elena (though, admittedly, that was pretty hot.) I'm talking about the absolutely adorable cuddle session between Stefan and Caroline, better known by die hard fans as Steroline.

Steroline shippers have been around since Day 1 of The Vampire Diaries, but it seems that the two vampires are slowly inching their way into romance territory. Oh, it's not like they know that yet — but the viewers certainly do. While Stefan is busy pining over his lost love, Elena, and Caroline is busy nursing her wounds about her and (stupid, mean, awful) Tyler's harsh breakup, Steroline shippers have been waiting patiently in the wings for these two vampire buddies to finally realize that they are more than just friends.

Individually, they are two of the nicest people on the show (despite being semi-murderous supernatural creatures) and deserve a relationship that blossomed out of an adorable friendship. Here are 6 reasons why Steroline just needs to happen already.

Their relationship will have stemmed from friendship.

Stefan and Caroline's relationship might be the first relationship on this show to feel like it happened organically. There's no doppelganger prophecy behind their relationship — they would have to choose to be together in order to make it real. Something about the two of them realizing that they have a genuine connection feels much more romantic than this star-crossed lovers situation that Elena and Stefan have always had.

Stefan taught Caroline how to control her instincts when she was just a baby vamp. He saved her from doing something destructive and helped her through one of the most difficult times of her life. Caroline returned the favor several times over — she helped Stefan confront his PTSD (in this case, post traumatic Silas disorder) and offered to kill Stefan's doppelganger in order to save his life.

They respect one another.

When Tyler came after Caroline for sleeping with Klaus (umm, hello, slut-shaming much, Ty?) Stefan defended her. He accepted Caroline, despite her flaws and bad decisions. Caroline did the same for Stefan — she never gave up on him even when he was at his lowest.

Dude, it's been like, two years. Sorry Stefan, but I don't care what the doppelganger prophecy said — Elena is the worst girlfriend ever. Seriously! What kind of a girl goes for her ex-boyfriend's brother only months after their breakup? It's not okay. Caroline gets points for just not being Elena in addition to being her awesome self.

There's a moment from the first episode of The Vampire Diaries where Caroline wants to date Stefan, and quickly realizes that Stefan wants to be with Elena. She's bummed out, because she always feels like second fiddle to Elena. Stefan probably knows how she feels — after all the romantic drama with Elena, he eventually lost out to his own brother. In a way, both of them know what it's like to never feel good enough — and yet the accept one another exactly as they are. Aww!

They make an unbelievably attractive couple.

Just look at them. Such a gorgeous pair.