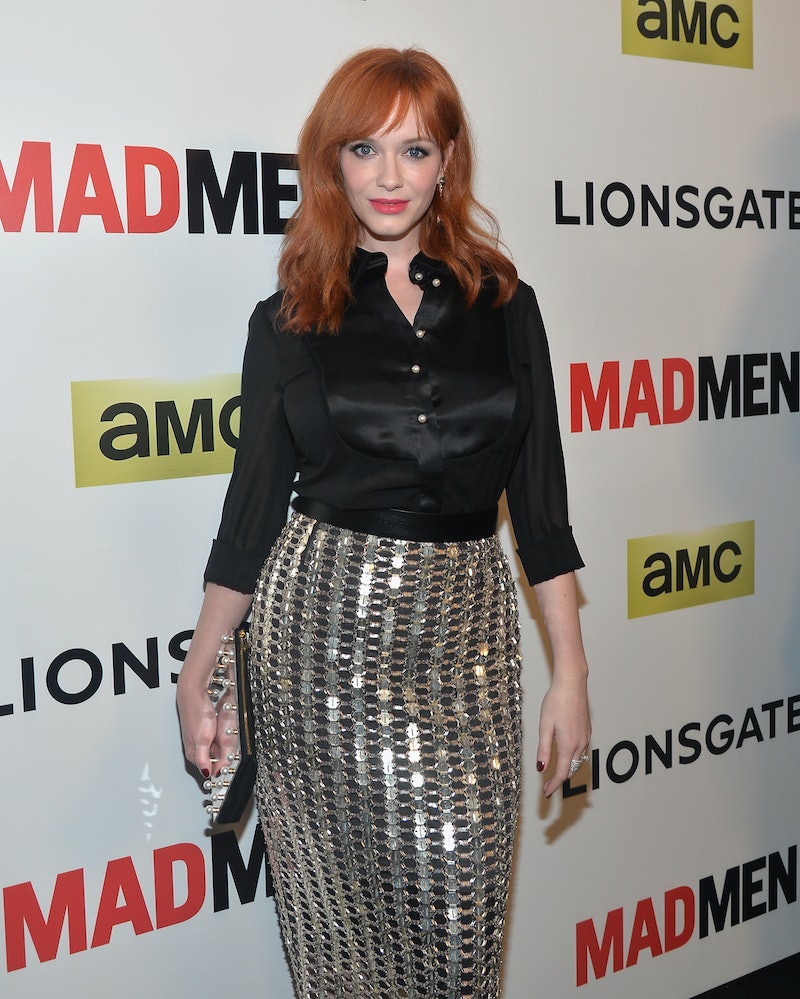 Mad Men's Christina Hendricks knows what's up when it comes to the eternal battle of puppies versus babies. In an interview with Health magazine (she's on the May cover), Christina Hendricks said she doesn't plan on having kids, but adopted a puppy. Yes! Team puppy for the win! Hendricks told the magazine that she and her husband Geoffrey Arend might be content to just stick with team puppy for good.

"We got a puppy, and that's my idea of starting a family," Hendricks said. "People say, 'Oh, that's practice for parenting,' but if it's practice for anything it's to be a mom to another puppy. We've decided that we are not really interested in having children." This makes total sense. You can train puppies to go poop in the appropriate place way faster than children and they'll never grow up and start breaking curfew. Puppies are cheaper than children, they (usually) don't wear diapers, and they're guaranteed to be cute. You could end up with a weird looking baby, but you know what the deal is with the puppy right away.

Plus, she's totally right that a puppy isn't practice for parenting. If anything, it's a lesson in why you shouldn't be a parent. Got a puppy that whines at night? Multiply that by about a hundred and it's still not as bad as a whiny baby. (And you can take my word for it because I've seen plenty of Teen Mom.)

Hendricks continued, "It's just very normal for people to say, 'Well, when you guys have kids…' and then when I say, 'Actually, I don't think we're going to do that,' people will say, 'Oh, you say that now…' It doesn't bother me, though. And, you know, there's a small chance I could change my mind."

Hey, "people," shut it! Hendricks is living it up with her husband and her dog and her awesome job playing Joan on Mad Men. She'll not have kids or have kids all she wants. All that matters now is that she's happy and a proud member of team puppy.

More like this
Watch Emma Raducanu’s Incredible Response To Her Early Wimbledon Exit
By El Hunt
Adele’s All-Female Lineup Includes Kacey Musgraves, Mahalia, & Self Esteem
By Shahed Ezaydi
Lindsay Lohan Is “The Luckiest Woman In The World” After Her Marriage
By Grace Wehniainen
Jesse Tyler Ferguson Had A Funny Run-In With A Fellow ‘Modern Family’ Alum
By Grace Wehniainen
Get Even More From Bustle — Sign Up For The Newsletter