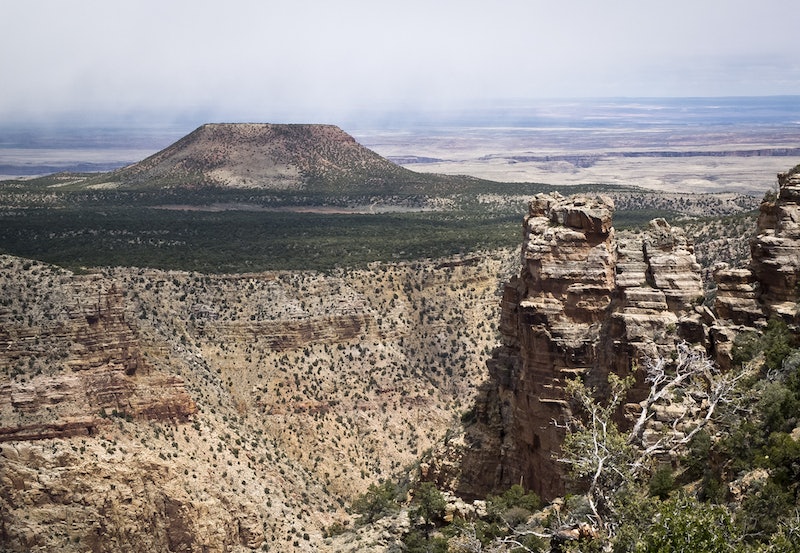 As anyone who lives here knows, living in Flagstaff, Arizona is nothing like most outsiders think it is. But thanks to years of movies representing Arizona as a cowboy hotbed full of scorching deserts and cacti (the plural of cactus), people outside of this state tend to have a pretty narrow view of where Flagstaff's citizens actually come from. (They also don't realize there's snow. So much snow.)

Flagstaffians are proud people, but we're also really down to earth. We're not bothered by being a little quirky and different than the rest of our home state, even if that also makes us more misunderstood. Because when it comes right down to it, we know Flagstaff is your home and there's no place we'd rather be. This may have been named one of the best cities for the outdoors, but you don't need someone else's stamp of approval. Our own stamp of approval is all we need.

We here in F-Town share a special bond, and it's the commonalities like these that make us proud to call Flagstaff, AZ your home. These items are just the tip of the San Francisco Peaks, since obviously, Flagstaff has too rich a culture to be covered by one listicle. But it's my attempt at paying homage to the town I lived in for 18 years — now that I'm actually old enough to appreciate it. So here you go, here are 43 things only a true Flagstaffian understands:

PEOPLE ASSUME YOU LIVE IN A DESERT

And that you must be only used to hot weather.

BUT YOU KNOW IT ACTUALLY SNOWS IN FLAGSTAFF

And frequently it will continue to snow into April and even May.

though SCHOOL HARDLY EVER GETS CANCELED

Flagstaff students have to learn whether there's five feet of snow out or not.

YOU GET ANNOYED AT DENVER CALLING ITSELF THE MILE HIGH CITY

Because at 7000 feet, Flagstaff is actually over a mile high and you don't see us bragging about that.

People from the desert do not understand that you don't break when you hit ice.

YOU GO TO WALMART FOR FUN

It's literally the only thing open at night where teens can hang out. It's like they want us to wreak havoc on their store.

YOU KNOW THERE WON'T BE FIREWORKS FOR THE 4th

STARS ARE A MAJOR SOURCE OF PRIDE

Living in the International Dark Sky City allows us to see stars on stars for days.

SOMEONE YOU KNOW HAS PROBABLY HIT AN ELK

Bonus points if it was in the middle of the day.

YOU CAN'T LEAVE THE HOUSE IN WHATEVER YOU WANT

Because you're basically guaranteed to see someone you know.

YOU'RE STILL SAD ABOUT PLUTO

Fun fact, Lowell Observatory in Flagstaff is where the former planet was discovered.

AND YOUR ASTRONOMY TEACHER STILL ACTED LIKE IT WAS A PLANET

YOU PRETEND YOU'RE NOT ASSOCIATED WITH THE REST OF THE STATE

We're not racist or homophobic, just our senate members/house representatives/governor are.

EPIC SUNSETS are normal to you

you're aware THERE ARE A MILLION COPS

AND THEY WILL PULL YOU OVER FOR JUST ABOUT ANYTHING

ESPECIALLY THat COP ON A BIKE

Clearly he has something to prove.

YOU'VE BEEN TO A WOODS PARTY

Probably even when it was still too cold to actually be outside.

and you've DITCHED SCHOOL TO GO TO THE CREEK

How can you study when all this is only 45 minutes away?

IT'S ALL ABOUT THE PINE CONE DROP

New York may drop the ball on New Year's Eve, but the forest-filled Flagstaff gets a pine cone that lowers two whole stories! Pretty epic.

Season passes to the Snowbowl are the biggest cockblock.

SAME GOES FOR HIKERS/BIKERS/ROCK CLIMBERS IN THE SPRING/SUMMER

BASICALLY, DON'T DATE SOMEONE ATHLETIC IF YOU WANT TO SEE THEM

BUT GOOD LUCK BECAUSE THAT'S WHAT FLAGSTAFF IS

ALTHOUGH YOU COULD ALWAYS JOIN YOUR SIGNIFICANT OTHER

Because when it comes down to it, hiking/biking/skiing in Flag isn't so bad. We have some pretty awesome scenery.

afterall, THIS IS WHERE OLYMPIANS TRAIN

So if you work out here, that basically makes you an Olympian too.

Good luck sneaking in during the previews, you'll be stuck with first-row seats.

SPEAKING OF MOVIES, YOU GET REALLY EXCITED When flagstaff gets a mention

A million movies take place on New York, LA, Chicago, Boston... but Flagstaff? Only 16 films have ever been shot here, so we get pretty excited when in Forrest Gump we see him run through Downtown. (P.S. is that not the longest GIF you've ever seen? How did they do that?)

BUT YOU FEEL LIKE RAISE YOUR VOICE WAS AN UNFAIR REPRESENTATION

As if Phoenix is some Utopia you escape to because Flagstaff is such a drag. Puh-lease.

IF YOU SAY YOU BOUGHT SOMETHING AT MACY'S, EVERYONE KNOWS YOU MEAN THE COFFEE SHOP

your HIGH SCHOOL RIVALRY WAS INTENSE

Sinagua is the clear loser since they don't even exist anymore. (I'm a Flag High girl, so no sympathy.)

YOU KNOW THE GLORY THAT IS MONSOON SEASON

Flagstaff's weather is pretty chill in that we don't really have earthquakes, tornadoes, or hurricanes. But summer is the time when we get those really neat thunder storms and rain that cools the air and smells delicious. Plus, everything is usually over by like 4:00 PM so it doesn't even ruin your evening plans.

and you HAVE TO DEAL WITH FLASH FLOODS

The one downside to monsoon season is the literal flooding. I left home when it was clear out and 15 minutes later I had to actually wade through my street to get home.

So when people complained and got it taken away you were like, "what horn?" You were also kind of nostalgic because we already lost Pluto, how much more could we take?

And you've probably been to a protest for your stance of choice.

THE CRAZY WEATHER LEADS TO SOME PRETTY INTERESTING CLOTHING COMBOS

Any place where it's capable of snowing in May makes dressing for the outdoors difficult. Let's see, it's hot now so I'll want shorts, but later it's supposed to suddenly hail so I'll bring a coat... (P.S. that photo is a picture of my actual Flagstaff friends demonstrating that eclectic Flagstaff style we all know and love.)

and have you ever noticed how many Flagstaff coats are neon green?

And most of all, of course

you know there's just no other place like Flagstaff