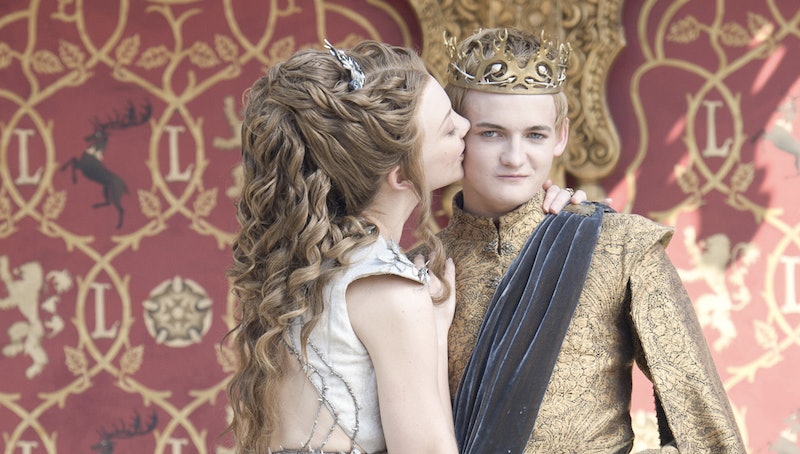 By now, you probably know that Game of Thrones killed off King Joffrey in the last few moments of Sunday. For a portion of his wedding guests, Joffrey's death was a welcome end, considering just moments before, he has an acting troupe perform a play that mimics the death of Ned Stark and finds a pantomime Joffrey pretending to have sex with the head of a Direwolf. The sheer look of horror on Sansa's face is enough to make Joffrey's death a relief, but then Joff has to go and pour wine on Tyrion's head after teasing him about his height. The room is full of people who's love to see Joffrey's head in a vice, but the question at the end of the episode is: Who actually killed Joffrey?

When Joffrey finally drinks his wine and chokes to death, Margaery's grandmother looks rather smug. Margaery herself seems to have a rather over the top reaction to Joffrey's sudden death, as if trying to cover something up. Sansa, of course has incredible motivation considering the emotional torture she just went through. Naturally, though, Cersei holds her purple-faced son (Hey, is that where the name "Purple Wedding" came from? Probably not. Moving on.) she assumes that the man Joffrey just humiliated throughout his wedding dinner was the person who poisoned her son. After all, Tyrion did pour the wine.

Fans of the books have settled greatly on the notion that the Queen of Thorns (that's Granny Tyrell) plucked one of the black amethysts from Sansa's hairnet and poisoned Joffrey. After all, that would be the easiest way for her granddaughter to become the most powerful person in the realm. However, seeing as there are few concrete answers to the question, various theories have popped up, including that Littlefinger was involved and that Prince Oberyn certainly had motive. Certainly, this answer to the whodunnit mystery will continue throughout Season 4, but for now, we can celebrate the end of the most-hated character on Game of Thrones. Ding dong, the Joffrey's dead.