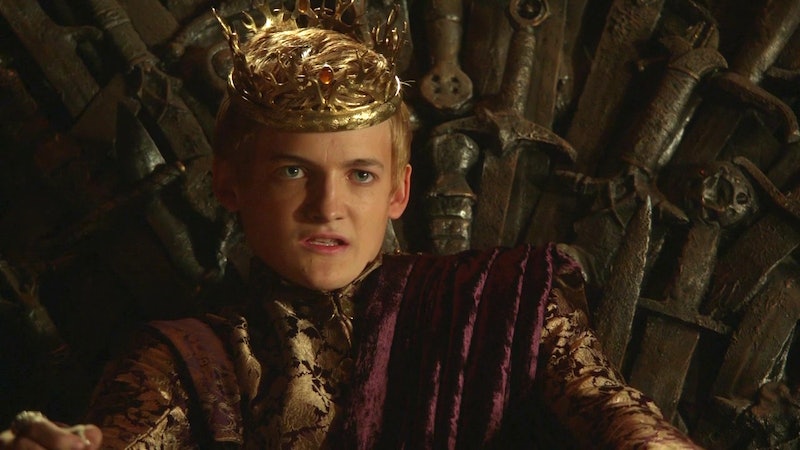 Well, it happened. Joffrey Baratheon is dead. The Game of Thrones plot point some of us knew was coming, and all of us waited with bated breath to happen, has finally come to fruition. Audiences cheered, viewers sighed with relief, and fans screamed, "Fuck yeah, George R. R. Martin!" at their television screams.

But I was not among the ecstatic. You see, I love Joffrey Baratheon. Nay, I adore Joffrey Baratheon. I may name my first born child Joffrey (Joffria, for a girl). Ever since I accidentally read a spoiler online (Is it technically a spoiler if the book has already been published?) I have been begrudgingly waiting, cringing at every Joffrey-laiden scene, hoping and praying it won't be his final breath. And on Sunday's episode, the second in the fourth season, it was clear he would take his final breath as king.

The Purple Wedding. A wedding that represents the Stark (hehe) opposite of Season 3's dreaded Red Wedding. The ying to the Red Wedding's yang, the purple wedding (a fan given nickname for Joffrey and Margaery Tyrell's nuptials) was a hint at redemption for the fallen Starks. Joffrey's slaying could mean the beginning of the end of the evil Lannister line. Could, being the operative word. But this doesn't change the fact that Joffrey, the show's most delicious and indulgent character, has just been poisoned to death.

And in the second damn episode. Couldn't the Game of Thrones writers at least given him to the end of the season to pillage and murder and commit acts of foulness for our viewing pleasure? Sure, Joffrey was the most despised character on cable television, but if you claim to take zero pleasure in his scenes, I don't believe it. Ordering Ned Stark's head on a skewer? Golden. Dumping a goblet of wine over Tyrion's head? A pure delight. Ordering hundreds of peasents to be killed because someone throws a cow pie at his head? Child's play, literally. The delight in watching Joffrey on screen comes in his absolute unpredictability. That is, you can predict he will do the absolute worst thing in any given scenario.

He is the incestual son of Cersei and Jaime Lannister, and while Joffrey's circumstance could very well be the motivating factor to his wrong-doing, we can't help but bet Joffrey was born pure evil. His siblings turned out to be oh-so friendly, and adorable members of the tow-headed crew, so what's his excuse? Without further adieu, here's 13 reasons why I will pine for the loss of Joffrey Baratheon.

2. His secondary role as a human punching bag

6. His friendly reminders that he is, if you forgot, the king

7. His perfected and flawless slow clap

8. His playful use of modern day slang

10. His love for his mother

R.I.P. Joffrey, the one true King of Westeros!