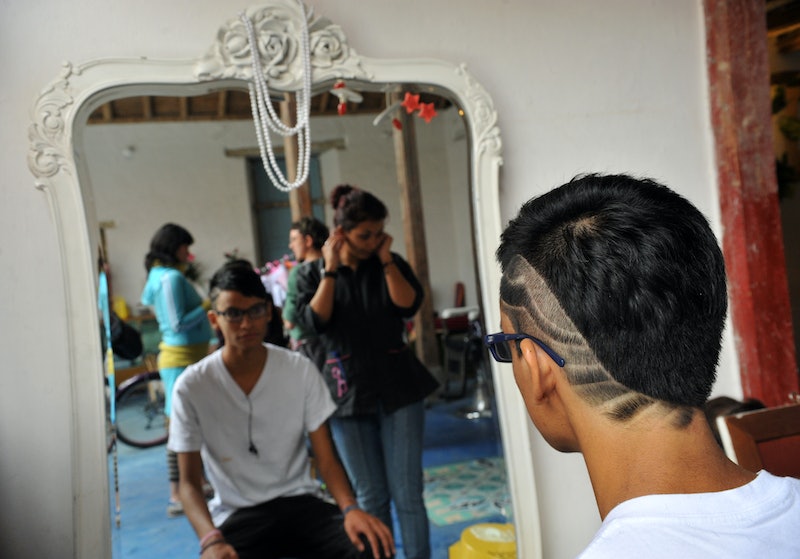 I can remember the first time I ever consciously ate something when I wasn't really hungry. I was young, maybe about six. In those days, I'd occasionally be babysat by my grandmother, who lived up to at least one stereotypical Italian trope — she was always pushing food on me.

I remember precisely what it was I was eating, too: It was a single slice of white bread. I wolfed it down quickly and slumped into an enormous green armchair, resentful of having been made to eat when I knew full well I didn't need to.

That wouldn't be the last time I'd feel resentment over eating when I wasn't hungry.

I've found myself hesitant even to consider, in my own mind, that disliking my body was worth sharing with anyone.

Struggling with weight, and the perceptions that go along with it, is not a foreign experience for me. Growing up in the upper-crust, outdoorsy liberal bastion of Marin County, California, I couldn't weather my chubby adolescence without coming out at least a little insecure, and sad. (OK, a lot sad.)

Around here, you sometimes feel surrounded by strikingly athletic, beautiful people. Sinewy, fit male bodies are held up as an ideal, and it's easy to conclude that falling short makes you undesired, unwanted, and unlikely to become otherwise.

In middle school, I got very heavy very quickly. I never really weighed myself, so I can't cite an exact figure — but it was a bad scene.

Still, things were OK, for a time. I had friends, even girlfriends. For me, the self-consciousness about my body didn't yet have force. I think that's because sex was, at twelve or thirteen, still a remote and somewhat unforeseeable thing.

When that changed, my displeasure with my own body became more ingrained. The social pulse of high school life made my loneliness, alienation, and self-doubt all the stronger. I felt almost paranoid — that there were unrestrained, thrilling orgasmic interludes going on around me, in places I wasn't allowed or desired, by virtue of my weight.

Knowing that what I saw in the mirror was my own fault provided fertile ground for hating my own body. Luckily, I'm not the binging or purging sort. I've always tended towards the passive instead — a tired, apathetic inner-dialogue on repeat; reminding me how comparatively slow, comparatively unattractive, and comparatively unhappy I am.

Of course, I'll never know how it feels to be a woman struggling with body image. After all, female bodies are displayed much more aggressively in our society as some sort of consumer good. I've known women who have, however, confided in me that they are struggling. I tend to advocate for openness, offering my support, but also suggesting they seek out a wider support system.

Which has made me, at times, feel like a hypocrite. I've found myself hesitant even to consider, in my own mind, that disliking my body was worth even sharing with anyone.

I've never especially thought of myself as a product of masculinity's culture — I've generally gotten along far better with women than men, and I don't believe in a retrograde, repressive vision of manliness. But in certain respects, common cultural impressions about maleness have still managed to color what I believe I'm allowed to feel and express to friends.

I bought into the inherent social value of holding myself together; presenting myself as the sort of charmingly aloof young man — even-keeled, dry-humored, emotionally bulletproof — who I thought would be more attractive to other people. Not least of all because he's more attractive to me.

When I was 21, I joined a pair of guy friends in an aggressive exercise plan, looking to shed some of my then-238 pounds.

The decision came while sitting in a booth at a local restaurant, feeling vaguely sick — not to my stomach, but at my own decision-making — upon the first glimpse of a giant sandwich on my plate. That moment, familiar to many, I thought "okay, I should really start exercising soon. Right after I eat this." The advantage of having friends nearby was that I was able to declare my plan out loud, and they were able to keep me on the hook.

I didn't have a clear goal in mind when I started. Getting down to about 190 sounded nice, but I'd never worked out enough to know how far I could go. In the end, I surpassed my wildest expectations — after about a year of weightlifting, cardio, and occasional yoga, I'd been cut down to a trim 172 pounds, and I looked damn good. (Okay, without the mohawk I looked damn good. [see top image])

It wasn't until then, however, that I realized the truly pernicious nature of poor body image. I felt better and had lost weight, to be sure, but the doubt was still there. It was no easier to think of myself as an attractive person, because the rot of those unspoken self-criticisms had sunk to my core.

However nice it was, my days wearing that particular pair of mind-blowingly tight black jeans didn't actually win me much in the way of happiness. I realized that the things that bothered me — like my inability to feel confidence in my own worth — weren't just about my body. They were about a state of mind that living in that body had fostered.

Of course, shedding pounds and shaping up had its ego boosts, but it was also precarious emotional territory for me. With every compliment came the realization of how many people were keenly aware of my size to begin with. For me, it drew other people's awareness of my body to the forefront of my mind, and it began to feel as though I'd let down people close to me when I began to gain the weight back.

It happened when I made another crucial mistake: I got a job working as a front desk receptionist at the same gym which I worked out at. Within weeks I loathed the job, and could barely stand to be there. I began eating idly again — I'd grab protein bars from the back room while working the overnight shift, eating when I wasn't hungry, once again.

I was learning a new lesson: If you're in really great shape, you can sit around and eat a ice cream for a long time before you realize you're gaining weight. Go figure.

These days, I know that if I decide to lose the weight again, it'll be for different reasons. This time, I want to feel better, purely for myself, even if nothing else comes of the weight loss. The road to lasting, positive change is paved with the amount of love and care you're willing to show to yourself, for your own sake. If there's one thing I wish I'd understood a little sooner, it's that.