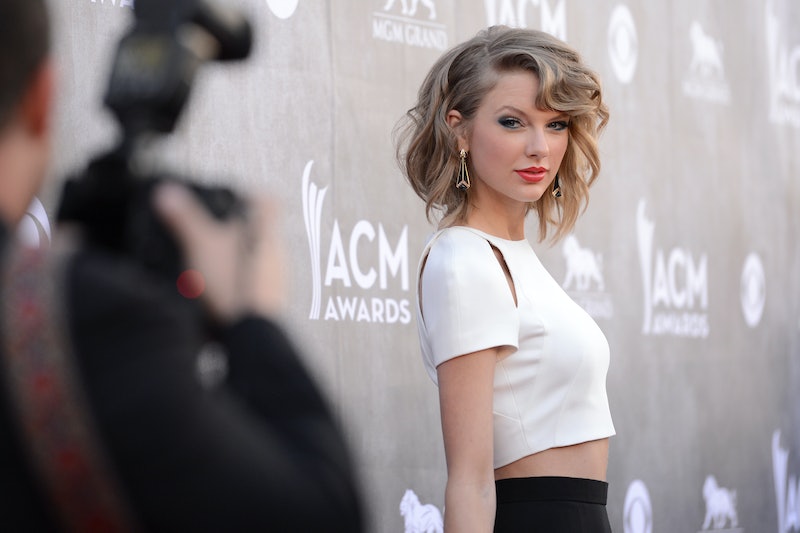 After Taylor Swift stopped by SNL on Saturday night, she didn't attend a crazy after party and stay up all night, instead she hopped on a flight to Ohio. Taylor Swift attended a fan's bridal shower and we know all about it because that fan was really freakin' excited. The bride-to-be/Swiftie, Gena, documented the surprise online and it sounds like Swift is just about the best choice for an obsessive fan because not only will she make a surprise appearance at your bridal shower, she'll do it against the wishes of her team, bring awesome gifts, and bake you cookies.

Gena, who has followed Swift's career since the beginning, had met Swift before and the two became friends. The background on Gena's Twitter profile shows two pictures of the pair: one taken recently and one from back in Swift's curly hair days. When Swift found out Gena was getting married, she told her that she wouldn't be able to make it to the May wedding, but said she would be there for the bridal shower. It sounds like Gena wasn't sure this would actually happen because she was surprised that Swift actually showed up. Gena wrote on Twitter, "I was going to say I had no idea Taylor was coming it was a complete surprise. She's an incredible person and amazing friend."

Gena went on to explain that Swift planned the trip last minute even though she was advised against it.

Gena also posted a ton of pictures because that what you do when Taylor Swift shows up at your bridal shower.

There's this one that Gena should immediately print and have framed:

This super corny, but awesome because TAYLOR SWIFT MADE IT HERSELF artwork:

The time when Gena was all, "Omg. I love your haircut."

The cookies Swift baked for her with Olympic figure skater Gracie Gold. (Seriously.) Gena captioned this one, "Taylor's bake fest with Gracie was actually to make me cookies and she gave me the recipe. It's chocolate chip."

And the many, many presents including Ina Garten's cookbook because duh!

I'm sure Swift was a huge distraction for the entire party, but if a bridal shower is all about the bride, it sounds like this bride was totally okay with that.