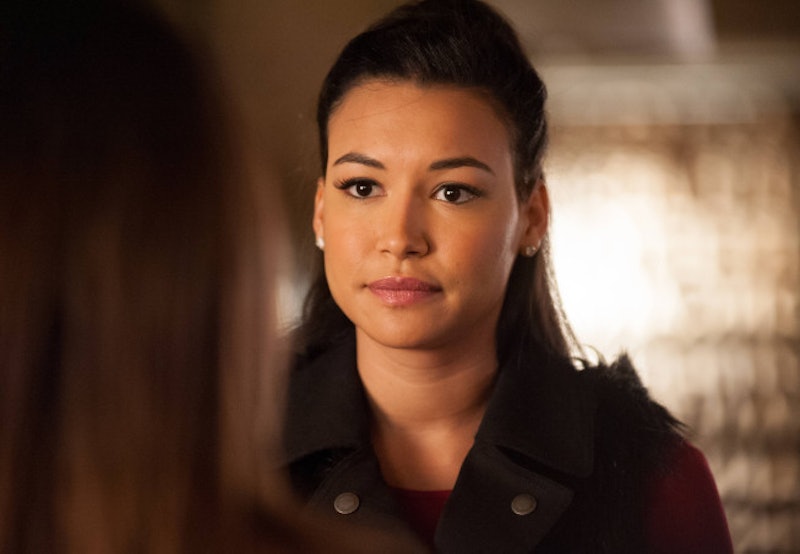 When FOX announced their decision to move Glee exclusively to NYC for the rest of Season 5, the majority of fans were overjoyed. But when Blaine, Sam & Artie arrived in New York, one thing was missing: Naya Rivera's Glee spitfire Santana Lopez. Still, ratings had been declining at an alarming rate while the McKinley half of the show recycled old high school plot lines with a new crop of cardboard characters. Meanwhile, the hijinks of Big Apple roomies Rachel, Santana and Kurt were largely considered the best and most refreshing part of the show. So in the thirteenth episode of the season, the New Directions was officially disbanded, the seniors graduated, and the show left Ohio for good.

But our favorite former Cheerio hasn't been seen since the shift, her absence explained halfheartedly: supposedly she's enjoying her rekindled romance with Brittany by vacationing around the world. While we're glad these two lovebirds have patched things up, we're sad that it comes at the expense of Santana's trademark snark livening things up in NYC. Don't worry: Auntie Snixx will be back next week for Rachel's Broadway debut, but whether she'll be returning as a series regular for Glee Season 6 still remains a mystery.

While we count down the days until Santana's long-awaited comeback, let's relive the razor-tongued diva's best moments on the show.

When she finally got her first solo

After being a background character for most of Season 1 (albeit a hilarious one), she finally came to the forefront in Glee's second season. We knew she had officially become an integral member of the club when she got her first ever solo at Sectionals, crooning Amy Winehouse's "Valerie" while expert hoofers Brittany and Mike danced around her.

When she was obsessed with Sam's giant lips

Santana Lopez is never short on insults or pithy one-liners, but her one-time boyfriend's oversized mouth was an endless source of inspiration for the sassy cheerleader:

And the crown jewel:

Heck, her obsession with Sam's lips even prompted her to write an amazing original song entitled "Trouty Mouth."

Every time she sang to Brittany

Her complicated relationship with fellow Cheerio Brittany often brought out the surprisingly tender side of the usually caustic Santana, as the two girls gradually explored their feelings and sexuality over the course of three seasons. Two of Santana's most memorable songs were soft, acoustic solos sung to her lover alone in the choir room: in the Season 2 Fleetwood Mac tribute episode, when Santana first professed her love to Brittany to the tune of "Songbird"; and again in Season 4, when she broke off their long-distance relationship with a heartbreaking rendition of Taylor Swift's "Mine."

That time she wore a nurse's uniform

In the Season 2 Valentine's Day episode "Silly Love Songs," Santana was determined to prove that Quinn was cheating on Sam with ex-boyfriend Finn, so she hatched a nefarious plan involving mono, french kissing and this outfit:

Needless to say, her plan went off without a hitch. She frenched a sick student, contracted his mono, frenched Finn at his Kissing Booth charity event, and then when Quinn turned up with the same illness, Sam finally wised up. Flawless. Just like that outfit.

When she totally killed a Michael Jackson song

After Warbler archenemy Sebastian seriously injured one of her teammates, Santana challenged The Criminal Chipmunk to a duel. And since this is Glee, all duels are settled through song. And since they were in the middle of a Michael Jackson tribute, it could only be to the strains of "Smooth Criminal." Sporting a fashionable fedora and accompanied by real life duo 2 Cellos, Santana belted out one of her most memorable songs. And totally won the musical matchup.

When she and Brittany kissed...finally!

Their sexual experimentation was acknowledged as far back as the first season, they professed their love for each other in the second, and they officially started dating in early Season 3, but Santana didn't actually get to kiss her girlfriend on screen until the thirteenth episode of Season 3. It was the smooch fans had been waiting for: after hiring the God Squad to serenade her girlfriend on Valentine's Day, Santana was thanked by Brittany with a big ol' smooch on the lips.

That time she stole Rachel's most iconic song

Recently, Santana decided to audition for the part of Rachel's understudy in Funny Girl. Of course, she did this without telling Rachel first and by stealing Rachel's most iconic song, Barbra Streisand's "Don't Rain On My Parade." When Santana strutted into that auditorium belting out the famous showtune, the look of shock on Rachel's face alone was worth it. But then Santana absolutely slayed the performance and landed the part, which spawned a fearsome feud between the two tentative friends.

Every time she creates yet another priceless GIF

Santana is a veritable GIF-factory — barely an episode seems to go by that doesn't spawn at least one priceless moving image. And their true value lies in being so applicable to everyday situations. Like when you're feeling annoyed:

Or really turned on:

Or, of course, when you're worried that your friend might be on drugs:

When she sang that crazy good Adele mash-up

A large part of early Season 3 dealt with Santana's struggles with coming out of the closet. This plot culminated in her being forcefully outed through a sleazy campaign ad attacking Coach Sue for having a lesbian as her head cheerleader. It was a shocking moment and one that had severe repercussions for Santana. She channeled her emotions into a superb mash-up of Adele's "Rumour Has It" and "Someone Like You," which is still considered by many to be one of the best songs ever performed on Glee, if not THE best. The arrangement, the vocals, the choreography, and the significance of the context all combined in a perfect storm of musical brilliance.

That time she starred in a commercial about yeast

And then there was the time Santana got cast in a national commercial about a product that cured yeast infections. Watch it here in all its hilarious glory: