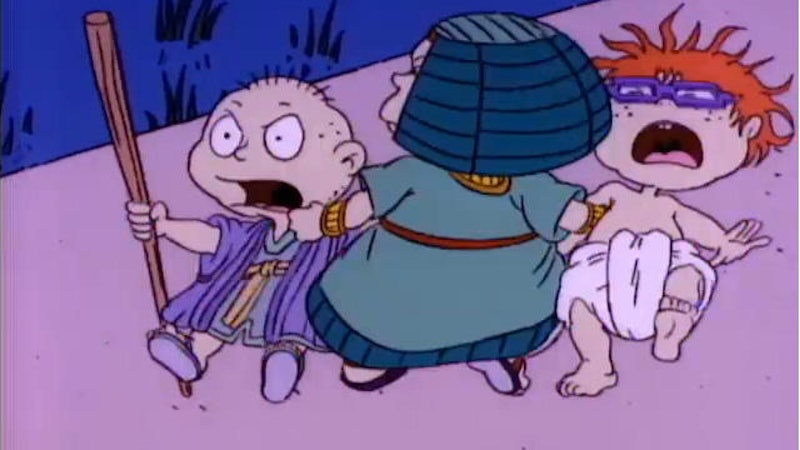 Monday night is the start of Passover, which means it's time to come together over a Seder, tell the stories of our ancestors, and reflect on how freaking awesome the Rugrats Passover Special was. Because hey, when you grow up Jewish in a largely non-Jewish area, it's easy to feel a little isolated.

In elementary school, for instance, every time a Jewish holiday rolled around, I was singled out to stand up and explain it in front of my classmates. Although I'm sure my teachers had nothing but good intentions, to me, the message seemed clear: you are different. When we sang Christmas carols and painted Easter eggs, none of the other students were made to give presentations on the birth of Jesus or the resurrection. But, inevitably, a round of "Here Comes Santa Claus" would be followed by a well-meaning, impossibly embarrassing, "Now Jenny wants to tell us all about Hannukkah!"

No. No, I most certainly did not.

This was not helped by the fact that Jewish holidays always seemed to me to be much less fun than the ones my goyish friends celebrated. Though my parents were wonderful about letting us have Christmas trees and Easter candy and all the kid-friendly trimmings of the non-Jewish holidays, I was still acutely aware of the fact that all of the holidays my family celebrated were, well... kind of depressing. When you're six years old and spending an evening discussing plagues and slavery over a five-hour, strictly regimented dinner while your friends are getting chocolate from a big, cuddly Easter bunny, you're bound to feel somewhat ripped off.

On top of that, there isn't exactly a glut of fun, holiday entertainment aimed at Jewish kids. So it was a mitzvah that Rugrats was around to help us feel a little less alone. Here are just a few of the reasons why it's the best holiday special ever.

About half of the episode consists of characters fighting over Passover traditions, complaining of boredom, and wondering if they can eat yet. That's a lot closer to the Passovers I remember than Frosty the Snowman is to any of my friends' Christmases.

Building the pyramids upside down, Chuckie accidentally wiping the lamb's blood off the door, Stu and Didi arguing over the pronunciation of "herb"— it holds up, too.

3. It Tells the Story In a Non-Scary Way

When you're a sensitive kid (and, let's face it, if you grew up Jewish you were probably a sensitive kid), the story of Passover can be a lot to take in, and yet the scariest thing I remember about the entire episode is how easy it is to get locked in an attic! The Rugrats writers do an excellent job of conveying the story in a way that's fun and accessible for kids, all without ever patronizing them.

4. It Was Something To Look Forward To

Getting to watch the Rugrats Passover special was probably my favorite part of the holiday- besides looking for the afikomen, of course.

5. It Meant That Tommy Pickles Was Jewish

If the coolest baby in the world was Jewish*, then that must mean being Jewish is pretty cool. And when you don't know any other Jews your own age, having someone like Tommy to look up to feels pretty good.