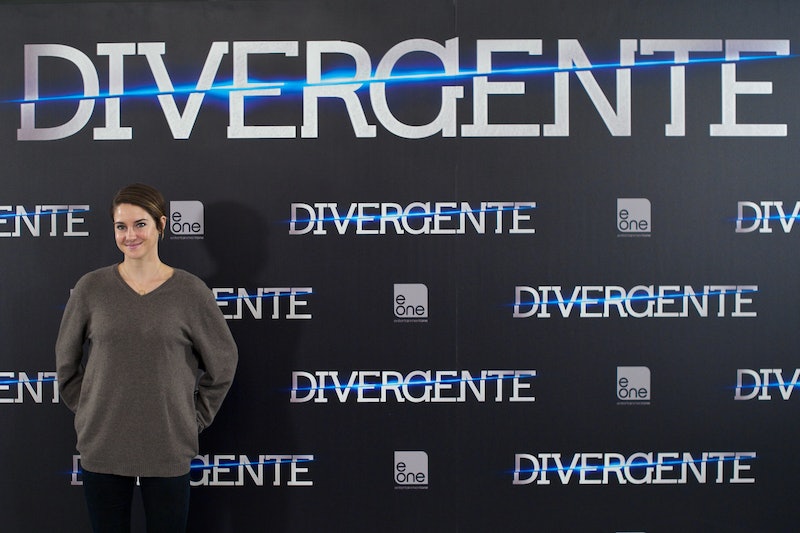 The latest news in the Divergent franchise has a lot of people upset: Allegiant , the third and final book in the series, is being split in two for the movies.

Anyone who's been paying attention to the world of YA-series-turned-big-bucks-movie-deals saw this move coming a mile away, because Allegiant's halving is only the latest in a long line of bisected YA finales: Harry Potter and the Deathly Hallows was split into two movies. Twilight's final book was turned into two movies. The Hunger Games went from three books to four films. It's an epidemic worthy of a dystopian YA franchise.

Weirdly enough, if you look elsewhere in Hollywood, you'll see that Hollywood actually loves trilogies. The Matrix was a trilogy. Ingmar Bergman has a famous trilogy. Before Sunrise, Before Sunset, and Before Midnight were incredibly popular. Even single movies typically stick to a three-act format. And sometimes, as with The Lord of the Rings, Hollywood does keep a trilogy a trilogy. People in the movies know there's a magical ring to the number three — so why don't they stick with it in their YA franchises?

There's something about a three-part structure that just gets to us as readers, in a way that groups of four or two (or twenty-eight) simply don't. It's called the Rule of Threes. If you want to be pretentious, you can refer to a group of three as a tricolon crescens, which is a "figure of rhetoric in which the author rises towards a climax of feeling through three similar phrases or clauses." Fairy tales, myths, jokes, and famous quotes frequently rely on a structure of three to increase tension, manage pacing, or just generally get their point across. Many of our popular idioms come in threes: Sex, drugs, rock and roll. Blood, sweat, and tears. Veni, vidi, vici.

It doesn't take a doctor, or a rocket scientist, or a genius to realize why publishing houses like the three-book deal so much. Three novels provide a neat package that keeps readers addicted, but lets them loose before they get exhausted. Let's generalize: in the first book of a trilogy, the world is introduced and some sort of major problem is solved. In the second book, we realize that the problem is actually much more pervasive we thought. Things get dark and hopeless. Good thing this wasn't a two-book deal, eh? And then in the third novel, we usually get some sort of satisfying Final Battle, whether internal or external. It's a structure that's been around for thousands of years, but it works.

That's why it's so infuriating to see Hollywood blatantly disregard the rule of threes just so they can make more money. None of these books — not Twilight, not The Hunger Games, not the Divergent series — needs a fourth act. Not only does a fourth movie interrupt the inherently satisfying structure that the authors have specifically used to pace out their narratives, but none of the final books have the narrative heft necessary for two movies. As Ashley Ross at Time writes, "The material in the final chapters of these franchises aren’t strong enough to carry the stories that made the books good enough to be adapted in the first place."

So Hollywood is deliberately breaking apart a successful narrative format for the sake of cold hard cash. They're disregarding the natural rules of pacing and structure for profit. And while of course they're doing this, it's frustrating for readers and writers and anyone who cares, because pacing is important. Flow and structure are vital. Turning three books into four movies is the type of short-sighted aesthetic decision that results in art with zero staying power. In short, not all numbers are created equal.