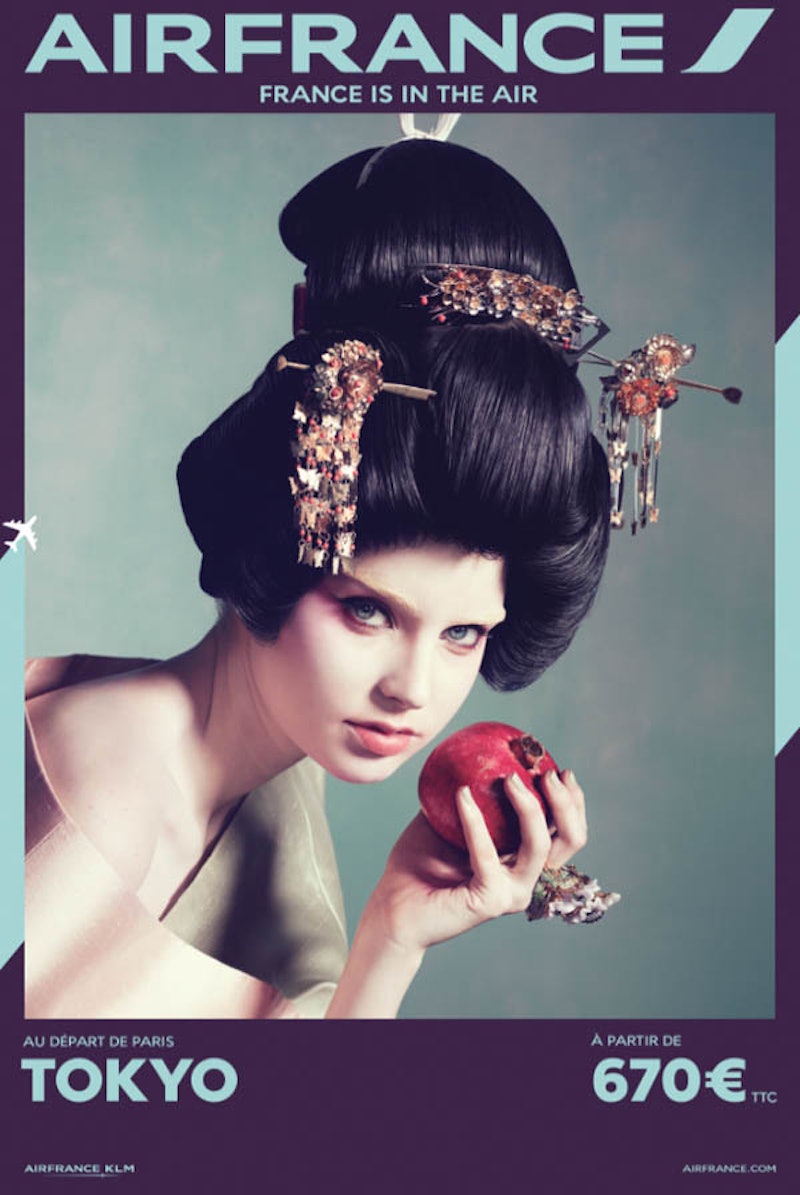 Ugh. Why is it that major companies keep putting out one racist ad campaign after another, even after so many of them have gotten into such hot water for doing so? The worst part is that I’m almost not even surprised when it happens anymore. Case in point: Air France’s new “France Is in the Air” campaign. Something’s in the air, alright — and it’s a whooooooole lot of offensive cultural appropriation.

The campaign looks pretty slick at first glance, but the issue isn’t the “fashion spread” style it uses. It’s the fact that nearly all of the images feature white women dressed up as representations of specific cities. Tokyo? White woman. Dakar? White woman. Beijing? White woman. New York? Black woman, which is also problematic, although for a different reason — as Jenn Fang writes on Reappropriate, “How is the message of this visual not: ‘Fly to New York and meet your first sassy Black woman!’?”

But what follows next is an example of how social media can be used for the powers of good: Currently trending on Twitter is the hashtag #FixedIt4UAF, which — you guessed it —a ttempts to take these awful, awful ads and “fix” them. The Tokyo image is the one primarily in play here (something which speaks strongly to me — you wouldn’t think it to look at me, but I’m mixed myself, with a good deal of Japanese in my background), and the results are as thought-provoking as they are hilarious. I’m particularly fond of the Godzilla one:

But the Pokemon one is also pretty priceless:

And let’s not forget the one that gives Air France a taste of its own medicine:

Nothing says “f*ck you” like a French maid costume.

Marcie Bianco at Policy Mic notes that with this extremely poorly advised ad campaign, Air France is either saying, “White people, this is what happens to you when you travel to the African nation of Dakar,” or “Travel to Dakar and see white models in ‘native garb.’” Either way, I can’t figure out how it is that campaigns like this keep getting the go-ahead over… and over… and over again. We live in a global society. Part of living in a global society is being sensitive to, aware of, and receptive to cultures other than our own. We have had plenty of lessons in the past about issues like this — so why don’t we appear to be learning from them? Something’s clearly got to be done — and if it involves using comedy to highlight the absurdity, so be it. Maybe if we keep calling it out every time we see it, something will finally change. Fingers crossed, right?