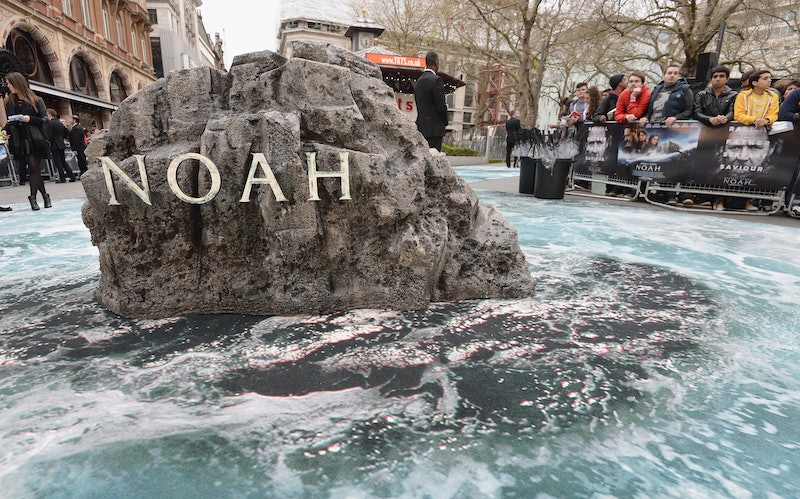 With any biblical epic, controversy is to be expected. And 2014 boasts a slew of Christian-inspired flicks, from Is Heaven for Real? to Son of God, and most notably, Noah. And while Noah was praised by critics and viewers alike, flooding the box office with larger-than-life numbers and growing ticket sales, there's one element of the film that can't go unaddressed by 2014's viewers: Where were all the Black people in Noah? The film is brimming with white folk — Americans, Austrailians, British people, but not one person of color, so what gives?

The films co-writer Ari Handel (who wrote the film along side director Darren Aronofsky) was asked to speak about the film's lack of diversty. His response? Pretty awful.

"From the beginning, we were concerned about casting, the issue of race. What we realized is that this story is functioning at the level of myth, and as a mythical story, the race of the individuals doesn’t matter. They’re supposed to be stand-ins for all people. Either you end up with a Bennetton ad or the crew of the Starship Enterprise. You either try to put everything in there, which just calls attention to it, or you just say, “Let’s make that not a factor, because we’re trying to deal with everyman.” Looking at this story through that kind of lens is the same as saying, “Would the ark float and is it big enough to get all the species in there?” That’s irrelevant to the questions because the questions are operating on a different plane than that; they’re operating on the mythical plane.”

Several things irk me with this response, the first being the writers claim that this story is a "myth". To many it is a myth, and to many this story is as real as the sky is blue, but all that doesn't matter when looking at the film's disclaimer: "The film is inspired by the story of Noah. While artistic license has been taken, we believe that this film is true to the essence, values, and integrity of a story that is a cornerstone of faith for millions of people worldwide. The biblical story of Noah can be found in the book of Genesis.” So by telling the audience this is a story of myth, based in a mythical world featuring fictitious events, is both conflicting and unfair.

Secondly, the fact that the writer refers to the film's actors as "stand-ins for all people" makes me wonder why they didn't take this opportunity to cast actors of all races. Surely the acting industry is tough for all those wishing to enter, but even tougher for those less often cast, i.e. people of ethnicities that aren't fair skinned. If the actors of Noah were simply "stand-ins", why not hire an array of actors and extras, not just the type we see in every other Hollywood film? Because by choosing "white" as the color to represent all people, the film is sending a very strong (and dangerous) message through the platform of a biblical epic: This is the color of God's people.

Thirdly, Handel compares the idea of casting people of color in Noah to either a "Bennetton ad or the crew of the Starship Enterprise.." Because life is simply that black and white. And even Stark Trek 's producer offered regrets for not casting a more diverse crew.

But Handel's blatant disregard shines brightest in this statement: "You either try to put everything in there, which just calls attention to it, or you just say, 'Let’s make that not a factor, because we’re trying to deal with everyman.'" The writer refers to "everything" as "every type of person." Handel not only admits to making the conscious decision to only include white folk in his film (because that would be too damn distracting), but the fact that he thinks including people of color would bring attention to the issue of race, is a plea of insanity. Clearly by not including a diverse populous, the film has done just the opposite of what this writer claims they were attempting to avoid.

Perhaps I'm overreacting (or perhaps I'm under-reacting), but in today's age of filmmaking, creating a multi-million dollar picture of such magnitude, that carries such significance for so many people, and not including the diverse people that makes up the human race, seems well — simply ignorant.