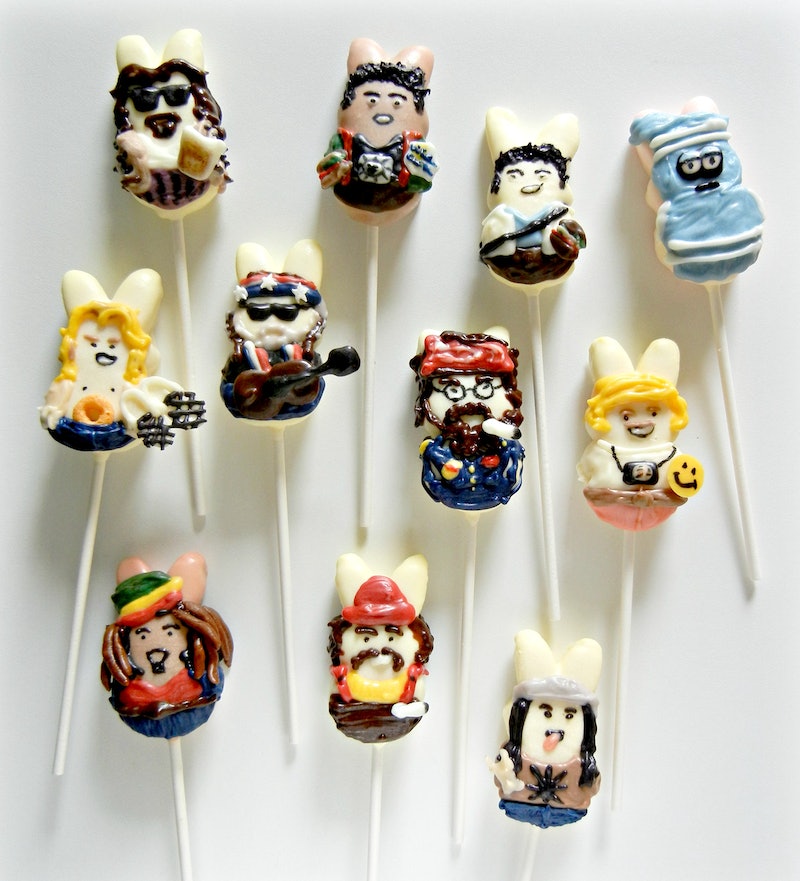 Last August, the U.S. Justice department announced it wouldn't challenge state laws legalizing marijuana. More states than ever have legalized or at least de-criminalized weed. And now Easter, a hallowed feast day for devout Catholics and major candy conglomerates alike, falls on 4/20. It's like weed legalization was written in the stars.

No, really. There's no calendar czar out there who arbitrarily chooses when Easter is. It falls on the first Sunday after the first full moon after the vernal equinox, which this year just happens to be the annual Day of Weed. So Kids, if your Easter egg hunt is particularly disorganized this year, or if the candy has been eaten by the time you get to it, it's not the Easter Bunny's fault. The Bunny (read: Mom and Dad) are very, very high.

In honor of this fateful confluence, we invited Michelle Clausen, Easter Peep artist extraordinaire, to outfit the bunny-shaped marshmallow treats as beloved pop culture stoners. You'll find some of the usual suspects — scroll down for Bob Marley Peep — but also some forgotten, ever-toking favorites.

Here they are, the Stoner Peeps, along with some unforgettable words of wisdom:

"If you like weed so much, why don't you just legalize it?" -Harold

"Let me tell you this, the older you do get the more rules they're gonna try to get you to follow. You just gotta keep livin' man, L-I-V-I-N." - Wooderson

Jeff Spicoli, Fast Times at Ridgemont High, and The Dude, The Big Lebowski

"People on 'ludes should not drive." -Jeff Spicoli, driving high

"The Dude abides." -The Dude

"I think people need to be educated to the fact that marijuana is not a drug. Marijuana is an herb and a flower. God put it here. If He put it here and He wants it to grow, what gives the government the right to say that God is wrong?" - Willie Nelson

"When you smoke the herb, it reveals you to yourself." -Bob Marley

How to Create Your Own Stoner Peeps

2) Melt either white chocolate or vanilla candy wafers or bark in a microwave safe mug (deep enough to cover the Peeps) until it’s nice and fluid.

3) Insert a lollipop stick into the bottom of each Peep (use some melted candy to make it adhere better).

4) Dip each Peep into the candy to coat. Allow candy to harden.

5) Decorate with more candy melt to create the details. Combine food coloring with small amounts of the vanilla candy melt to get the colors you need.

6) A few decorating notes: Bob Marley’s dreads are made from chocolate Tootsie Rolls. The bagel in Jeff Spicoli’s pants is a Cheerio, and Willie Nelson has some star sprinkles on his signature bandana.

More like this
How Long Does Leftover Stuffing Last? Here's When To Toss It
By Chelsey Grasso and Alexis Morillo
16 Friendsgiving Recipes Your Besties Will Love
By Alexis Morillo
The 77 Cheapest, Most Clever Gifts On Amazon
By Rebecca Martinson
TikTok’s Viral Tunacado Sandwich Is The Internet’s Favorite Lunch Right Now
By Alexis Morillo
Get Even More From Bustle — Sign Up For The Newsletter