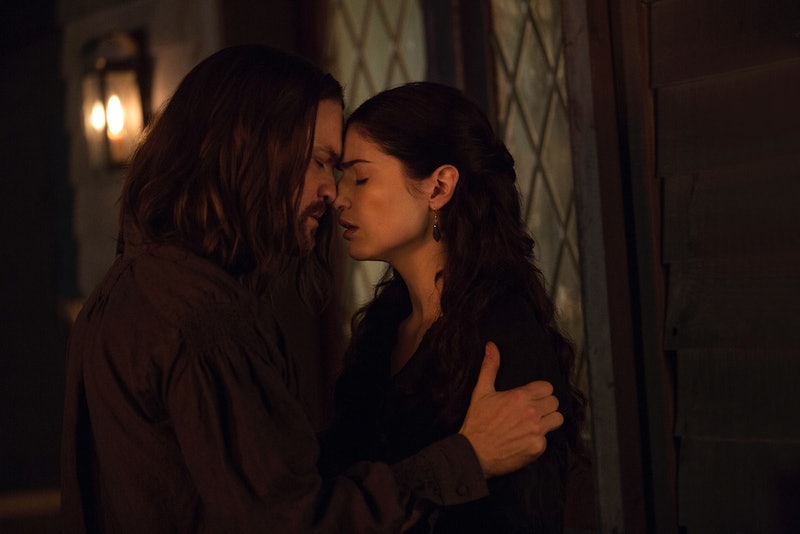 What's a witch to do when desirous of a home country of her very own in which she can run wild and free, yet she's surround by Puritans? Start a witch hunt, naturally. In WGN America's Salem, the reimagining of the classic horror story sewn into the fabric of America's creation, that's exactly what the witches are doing: kicking the insecure asses of Puritanical rule by pitting them against each other in order to gain supreme rule. These are not Ryan Murphy's witches, y'all. Because amidst all of the abominations, the lashings, devil worship, and accused fornicators, Salem is one seriously fucked up horror show, and if you're a fan of the fear, you're likely going to love it.

It is Mary's love of John Alden (Shane West) that sends her down a path she cannot return from. Starcrossed lovers forever entwined thanks to their love affair that — spoiler alert — produced a baby, Mary's life remains forever changed in the name of staying alive and not being accused of a witch.

Without giving too much away, Mary becomes a witch. Jumping ahead a few years, the story finds Mary married to the mean-mugging George Sibley, after believing Alden to have been killed while fighting in the French and Indian War. Upon his return, however, he too is heartbroken. (Love and life were much harder when there was no social media to update your every waking action.)

The rest of the cast is equally as mystifying as they are intriguing. There's Cotton Mather (played by Seth Gabel), renowned minister and author, who's also pretty freaked out about all of this witch nonsense. Though his fears are mostly thanks to the über-possessed Mercy Lewis (Elise Eberle). Eberle does some serious heavy lifting on the crazy front but manages to not venture into overwrought and super-camp territory: which is no easy feat, all things considered. Also on the crazy side of things is Isaac the fornicator — who gets probably the best makeover the 1600s have ever seen — played by the delightful Iddo Goldberg.

But back to Cotton Mather. You see, homeboy isn't all good life decisions and tempered thought — sometimes even the smarties do stupid shit. He's a regular at the local whorehouse (where he likes to get it in while he's really nailing down his Revelations sermon) and a lover of theatrical scare tactics, like parading Mercy around the village in a truly archaic-looking bound-and-gagged leash device. He's not a stupid man: his rationale is largely sound considering all the mystery and weirdness surrounding young Mercy (she has wounds on her that could not possibly be self-inflicted, for example). He's equal parts learned man and religious scholar. Still, his practices are (and should be) questioned. Could a girl possessed not also be possessed to lead them away from the doers of these deeds? (The answer is a resounding: A-DOI.) Naturally, some folks aren't too keen on the hysteria that comes from a bona fide witch hunt, but they're in the minority because if the Puritans love anything it's being scared into submission.

Despite the antiquated timetable of the series, there are plenty of allegories to be drawn regarding the power of The Others — be it women (because, duh), societal weirdos, or pretty much anyone who's not rich and white. Ashley Madekwe's Tituba, for example, is the only black woman on the show, yet she shows incredible strength in subtle ways, hinting at a lot more internal complexities to come. Same goes for Tamzin Merchant's Anne Hale, a modern-seeming woman with little fear and what looks to be strong indicators of future foil-dom with Montgomery's Mary Silbey.

Basically, Salem is not for the faint of heart. But in the end, its goals are simple. What do these witches want? The same thing as everyone else. "A country of their own." And even though it equates men's need for war to a woman's desire for love — "Love is to a woman what war is to a man: the most deadly thing they'll do," proclaims Mary — we're intrigued enough to want to see what other goings-on live within its cauldron.