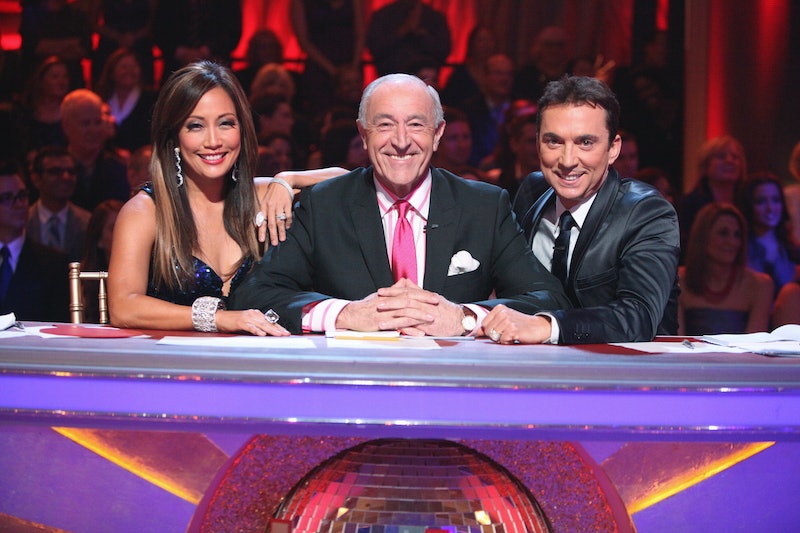 Five weeks into this Dancing With the Stars phase of my life (which constitutes either a spiritual awakening or a quarter-life crisis, depending), I feel like I've learned enough about the show to begin assessing it with more critical pair of eyes. My first and second episodes, man, I was just bowled over by the dancing . The movement! The pageantry! Other nouns I might use here to describe dancing!

But now that I've gotten that sentiment out of the way, we can better lock into the thing I really want to talk about tonight: my issue with the judging. Maybe judging in general, across the reality competition spectrum? I don't watch Idol or The Voice or any of these other shows to offer a truly holistic take, but it strikes me that problems on DWTS are faced by those on any other show. And chief among them: What's the point in doling out such high scores if they do nothing to distinguish the contestants from each other?

39/40. 39/40. 37/40. 40/40. These are just a few of the scores doled out on the latest episode of Dancing with the Stars. And I don't want to be a wet blanket here or anything but... those scores are way too goddamn high! If the pairings are regularly achieving near-perfect scores five weeks in, where else is there to go? Could another dance be considered more perfect somehow, or are we really suggesting that James and Peta achieved the height of dance with their "Let it Go" routine tonight?

Even amongst the "low-scoring" groups — say NeNe and Tony, Candace and Mark — the scores are not that low. A 35 can't be considered much worse than a 39, especially in a field of 6-7 pairs. Even when you add them up over the course of weeks, you're looking at pretty minimal differentiation.

My proposal: Instead of turning so cleanly into the self-esteem skid (I'll restrain myself from saying anything, anything about Bruno's particular brand of "judging") with all these 8s, 9s, and 10s... why not throw in legitimate 5s, 6s, and 7s? They're not sexy. But for reinforcing the educational foundation of this show, both in terms of the stars themselves (they're here to grow as dancers!) and those of us learning at home, it would be a hell of a lot more instructive.

Even if they're heaping on liberal praise, it's obvious that Len, Bruno, and Carrie Ann know what they're talking about when they assess the dancers' performances. But sometimes it's very difficult for those... less dance-educated among us to understand what they're saying. A general scoring rubric would go a long way toward helping that kind of person follow along! Now obviously you could never go so far as to say "a 5 means this, a 6 means this"... but understanding the broad strokes — generally what a number means — would make for an infinitely more engaging experience.

The very format of the show means that ultimately these scores don't matter that much and spending even 500 words talking about them is already 500 words too much, but these are the thoughts that pop up over the course of a two-hour live-blog. And who knows, maybe you feel the same way.