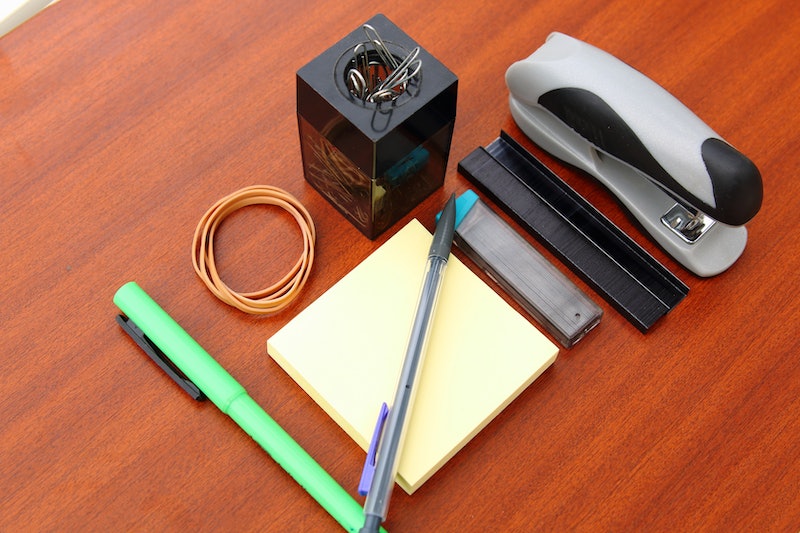 Although my doctor hasn't diagnosed me as suffering from Obsessive Compulsive Disorder, I'm pretty sure it's just a matter of time. For as long as I can remember, I've been overly fixated with order, lists, the number eight, and I just can't stop double checking everything in sight. Apparently — and this is common for many people with a panic/anxiety disorder — I'm prone to OCD tendencies. It's ridiculously exhausting.

You may not be like Jack Nicholson's character in As Good As It Gets, but if you just put your shoes in order for the 10th time this week, then you might have some OCD tendencies, too. Here are 15 ways you know you too might be a little obsessive-compulsive. (WebMd, be damned!)

It doesn’t matter that you know, for a fact, that the stove is off. You just can’t help yourself.

Have a roommate who just, in your humble opinion, can’t clean the bathroom right? Yeah, best to be sure about that soap scum.

What do you mean lunch before morning coffee?! I don’t care if it’s noon! Coffee must come first!

YOU HAVE A FAVORITE NUMBER

My favorite number is eight, and because of this I’m addicted to eight, and multiples of it. My alarm cock is eight minutes fast, when I double check everything it’s in eights, and when I saw Hannah on Girls had an addiction to eight too, I almost lost my shit. Get out of my brain, Lena!

IF WALLPAPER IS EVEN SLIGHTLY OFF, YOU’RE LIABLE TO START PACING AND GETTING NERVOUS

How could someone do this to ME?! Why is this happening?!

MAKING LISTS IS THE HIGHLIGHT OF YOUR DAY

Hell, you don't even need a reason; you just make lists BECAUSE YOU CAN.

AND GETTING TO CROSS THINGS OFF Said List IS, LITERALLY, THE SECOND-MOST EXCITING PART OF YOUR DAY

SAME THING GOES FOR ORGANIZING EVERYTHING IN SIGHT

It all looks so… livable.

BECAUSE WHEN THINGS AREN’T ORGANIZED, IT’S PRETTY MUCH THE END OF THE WORLD

And you GET ANXIOUS BY THE DISARRAY OF OTHER PEOPLE’S HOMES, STOVE TOPS, FRIDGES … YOU NAME IT

IF SOMETHING BAD/STRANGE/SCARY/UPSETTING HAPPENS, YOU CAN’T. STOP. THINKING. ABOUT. IT.

Because what if it had been done differently? What if you didn’t do what you did when you could have done otherwise? WHAT IF?!

A BROKEN NAIL can RUIN YOUR DAY

And not because of some absurd cliché, but because now all your nails are no longer the same length, and that’s the worst.

Especially WHEN YOU GET THEM ON YOU

Not just germs, but sticky germs.

Because how else are you supposed to get through a post?

You probably also found a typo.

More like this
These 4 Zodiac Signs Have Naturally Inquisitive Souls
By Nina Kahn
Wimbledon Alters All-White Kit Rule Amid Candid Period Discussions
By Catharina Cheung and Rachel Mantock
Here’s Your Daily Horoscope For November 30, 2022
By Mecca Woods
Here’s How To Find Your Spotify Wrapped
By Emma Lord and Emma Carey
Get Even More From Bustle — Sign Up For The Newsletter