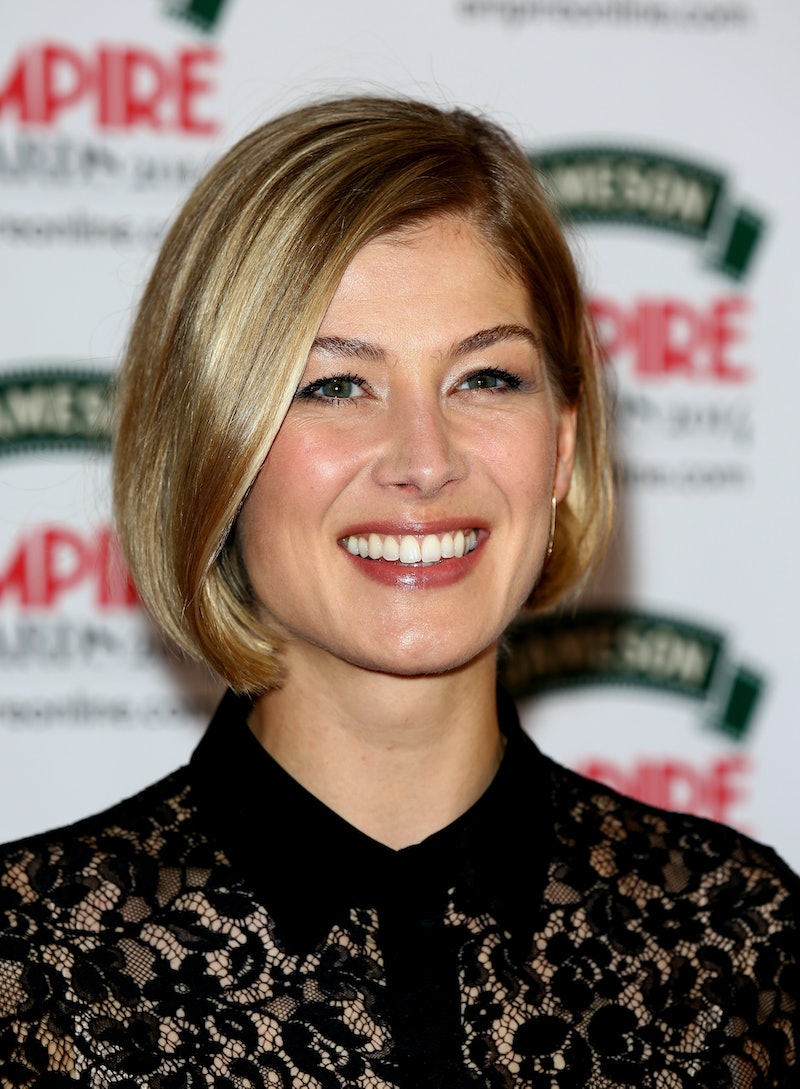 I knew from the first moment that it was announced that Gone Girl , Gillian Flynn's 2012 bestseller, would become a movie, that it'd be a hard book to adapt. Sure, there were all those narrative twists and turns, but that wasn't what I was concerned about; the thing about the novel that worried me the most was its lead character, Amy Dunne. As all those who've read Gone Girl know, Amy is a complex, intelligent, intensely flawed woman — in other words, everything Hollywood hates. What would a major studio like Fox do to her? Would they tone her down, make us sympathize, give her more "likable" flaws? Anyone who'd read the novel knew that to do that would be to ruin Amy, yet it seemed likely that Hollywood would want to make her a "safer" female character. The moment that Rosamund Pike was cast in the part, however, my fears subsided; if any actress could make Amy as complicated, dark, and, most important, feminist, as she is in the book, it was Pike.

That may seem like a big assumption, considering that until Gone Girl, Pike was known mostly for a series of strong but small roles in films like Fracture and An Education. While it's true that Pike is much lesser-known than Charlize Theron, Emily Blunt, or the other actresses reported to have been vying for the part, though, she brought something to the table that they (at least publicly) didn't: thoughtful, unabashed, real-life feminism.

In interviews, Pike spoke freely about her views on marriage ("it is interesting to break all the rules"), her feelings about ambition ("as a woman, you feel that you shouldn’t want to better yourself against others"), and her experience being typecasted ("people are so keen to pigeonhole you in this industry that to bust out of that is always good"). She never seemed shy or embarrassed about her beliefs, as one might expect from a relatively unknown actress. In order to play a feminist character, an actress didn't need to be feminist herself, of course — but the fact that Pike so clearly was, with such pride, spoke volumes about the way in which she'd portray Amy Dunne.

This isn't traditional feminism, but it is feminism — a version unlike any Hollywood has ever seen. So, when casting Amy, there was reason to be nervous. Actresses like Theron or Blunt are hugely talented, of course, but playing such a complex, unlikable character required more than skill. It needed understanding — and that's where Pike came in.

A relative newcomer, Pike didn't have the track record of the other actresses. There was no question, though, that she got Amy in a way the rest probably didn't. Take, for instance, a recent interview in W Magazine. Discussing her breakthrough role as a Bond girl in 2002's Die Another Day, Pike noted the oddity of landing such a major part at the age of 21.

"I was made to look far more sophisticated than I felt," she said. "Instantly, I had to come to terms with myself as a woman and also as an object. I was looking at myself from the outside for the first time. That awareness, for any girl, is both horrible and fascinating."

Later, the interview touched on the subject of a London production of the play Hitchcock Blonde, in which Pike had a nude scene. Said the actress, "the play was about the male gaze, male expectations, and, finally, female power and the lack thereof. This girl had dark secrets, but she also wanted to be adored."

These quotes would be startling from any actress, but especially so from one only on the verge of stardom. Pike is willing to speak strongly about feminism and female standards, despite any flack it may get her. Her admiration for "dark" characters, too, is equally remarkable. Critics of Gillian Flynn's novels complain that her female characters are "mean" and "angry," products of the author's supposed misogyny. The unlikable Amy Dunne, in particular, received flack for "giving women a bad name," despite Flynn's rightful argument that fictional women, or real ones, for that matter, don't have to be nice to be feminist. As made clear from her comments, Pike supports this wholeheartedly. In Gone Girl, she'll play Amy with insight, power, and only the sympathy the character's actions warrant, nothing more; she won't condescend to the woman, or attempt to make her more likable. Likely, Pike will be an extraordinary Amy Dunne.

Of course, this is all speculation; until Gone Girl's release in September, there's no way to know how exactly Pike will bring the book's protagonist to life. I'm confident, however, that no matter how she plays Amy, Pike's performance will be memorable, because in a rare Hollywood occurrence, a compelling, feminist character is going to be played by a compelling, feminist actress. Theron or Blunt might've been the Amy we liked, but Pike's Amy, for better or for worse, is the one we need.