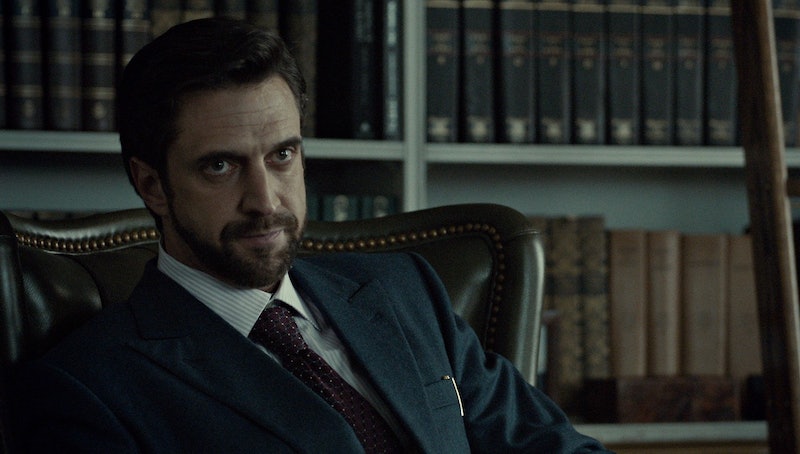 We knew the titular serial killer was up to no good when he led the FBI straight to Miriam Lass last week on NBC's Hannibal . Why would he let her go after two years, if not as part of some dastardly plan that he'd concocted? Turns out she was exactly that: he had brainwashed the former FBI trainee into believing that Dr. Chilton — not Hannibal — was responsible for her kidnapping and torture, and was also the infamous Chesapeake Ripper. So when she saw him through an interrogation room mirror, she reacted on instinct, pulled out a gun, and Miriam shot Chilton in the face.

Wait, what? As anyone familiar with Hannibal mythology knows, Dr. Chilton (played on the show by the superb Raúl Esparza) is quite an important character in the series of books by Thomas Harris. The TV show hasn't even caught up to the events of Red Dragon yet (the first novel in the series), so how can Chilton already be dead? Is the show starting to drastically depart from its source material? Or is this all a big red herring to throw us off? Let's examine the evidence to determine whether or not Chilton really is dead.

That gunshot wound looked pretty fatal. Did you see all that blood? And killing off such a famous character from the franchise would be a very effective way for creator Bryan Fuller to set his show apart from the books and films. Nor would he be the first television writer to depart drastically from his source material; there are plenty of TV shows adapted from books that have made the decision to craft their own stories rather than retell old ones with slavish faithfulness. (HBO's True Blood, Showtime's Dexter, and AMC's The Walking Dead all come to mind.) Does Hannibal really need Dr. Chilton? While a consistent presence in the books and films, he never really does anything other than act sinister and incur Hannibal's wrath. Perhaps his character serves a bigger purpose by dying than by continuing to live... even though we will miss Esparza's deliciously conniving presence.

On the other hand, Chilton does have a history of surviving brutal injuries. Last season he had all of his internal organs systematically removed by psychotic patient Abel Gideon. He managed to survive intact, minus one kidney, rendering him unable to consume meat — which in this world is probably an advantage because it means you can't unknowingly be fed human body parts by a sadistic cannibal. That bullet went through his cheek, which, while gruesome, is probably more survivable than one through the forehead or straight through the heart. And he wouldn't even be the first character on the show to be presumed dead before resurfacing. There is of course Miriam, who was found two years after disappearing. And last season, viewers assumed Gideon was dead after being shot by Will Graham, but he popped up very much alive this year.

So if Chilton survived his wound, it's possible that Jack Crawford, who's been growing more and more suspicious of Hannibal over the course of the season, would keep the doctor's condition a secret to protect him. So don't be surprised to see Chilton pop up very much alive (if very scarred) sometime in the future. After all, consider this exchange between Fuller and an interviewer after the most recent episode:

Chilton, correct me if I'm wrong, is the first character from the literature that you've killed who's still alive in later books. Do you feel that shakes things up, or do you worry about not having that character to play later?

Serpico survived a bullet to the face.

Perhaps Fuller does intend for Chilton to be dead at the moment, but purposefully wrote his death to be conceivably survivable in case he needs to revive the good doctor at some point in the future. Killing off such an important character is a ballsy move, and if he had done it by, say, decapitation, then if he realized a season or two from now that he needed Chilton back, he would have painted himself into a corner. Lending credence to the "hedging his bets" theory, here's what Fuller had to say to TVGuide:

As far as canon goes, I wouldn't put it past me to have [Chilton] show up looking like Ed Harris in History of Violence in Season 3 or 4. I love Raúl and I love what he brings to the show. [...] I would never count out Dr. Chilton.

This makes it seem like Fuller reserves the right to bring back Chilton at some point in the future, but isn't planning on reviving the doctor anytime soon. Then again, he could just be saying that so we're surprised when he pops up next week. Either way, we're keeping our fingers crossed that Chilton makes a comeback sooner or later. Esparza has been a terrific addition to the show and we're sad to see him go.

More like this
'Tell Me Lies' Season 2 Is On The Way & The Cast Already Has Ideas For What's Next
By Gretchen Smail and Grace Wehniainen
Ava DuVernay Thought The 'Queen Sugar' Series Finale Felt “Really Satisfying”
By Brad Witter
The First Trailer For 'That '90s Show' Includes So Many Nods To The Original Series
By Jack Irvin, Alyssa Lapid and Grace Wehniainen
Elizabeth Debicki On Her Approach To The Most Debated Scene From 'The Crown'
By Grace Wehniainen
Get Even More From Bustle — Sign Up For The Newsletter